How to Eat 50 Pounds of Fish

You’ve caught a mess of highly perishable fish. Now what? 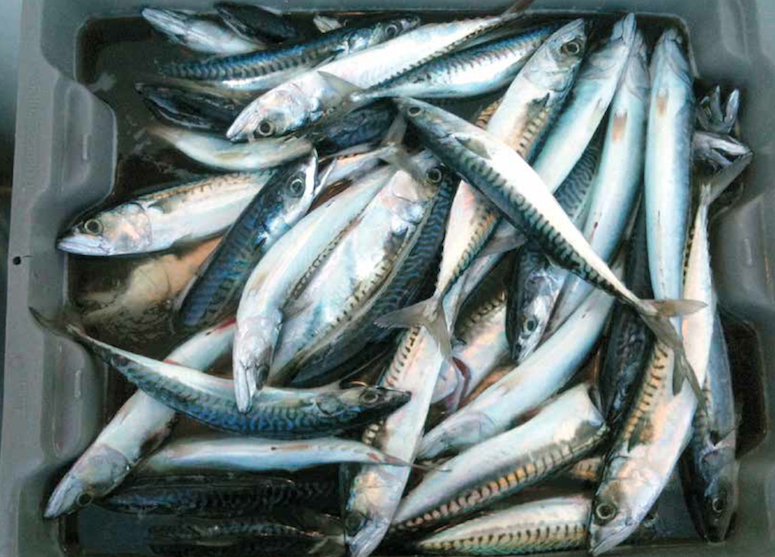 Starting in the dead of winter and continuing on until the early spring the fishing boat captains of the New York Bight get the itch to head offshore and start looking for mackerel.

The National Marine Fisheries Service rates Atlantic mackerel stocks as “uncertain”—the unknowable condition of many fish that range over large areas. And the unknowable nature of these highly migratory half-pound to two-pound members of the tuna family is made even more unknowable as climate change shifts their travels.

Mackerel’s annual swoop into our waters, once so predictable, is now a matter of speculation. In some parts of mackerel’s global range the uncertainty is so great as to prompt environmental organizations to reconsider whether there are really enough to go around anymore. In January the United Kingdom’s prestigious Marine Conservation Society removed mackerel from its list of environmentally suitable fish to eat.

But on our side of the pond most sustainable seafood lists still keep mackerel on their green lists. And following their lead I still anxiously await the fish’s arrival in our waters, trolling the online fishing forums we anglers frequent when cabin fever hits. “Anybody find the macks yet?” goes the typical subject heading of a thread on the fishing site noreast.com. Then following the opening post there is usually a completely subjective and not-altogether-fact-based disquisition as to which boat—the Brooklyn VI out of Sheepshead Bay, the Golden Eagle out of Belmar, the Superhawk from Freeport—is the best at finding mackerel when the mackerel get tough. My own subjective prejudice (and the proximity of a D train stop) makes me partial to the Brooklyn VI and it was to Sheepshead Bay that I headed in the winter of 2012 to see if I could get into some macks. Arriving at the docks off Emmons Avenue, I saw a sizable crowd already staking out their claims along the rails. A sign in Korean hung from the Brooklyn’s bow that I’m pretty sure said “Absolutely Fricking Awesome Mackerel Fishing, Daily, 7:00 AM.”

Each species of fish brings the allegiance of particular nations. Spanish speakers have a soft spot for cod. Greeks favor porgies. Mackerel, meanwhile, tend to attract Koreans, Slavs, Scandinavians and other peoples who know how to preserve the fish’s particularly tricky flesh. When I finally secured my spot on the rail it was therefore fitting that two young Korean men were rigging up to my right while, to my left, an underpaid Bulgarian hotel clerk prepared a massive cooler for what was clearly intended to be a subsistence outing. I, meanwhile, had a modest ice chest. I have in the past brought my big cooler mackerel fishing but after a captain on one ill-fated trip failed to find fish it was so humiliating dragging an empty cooler as big as a coffin off the boat that I vowed never to bring it again.

And herein is the main problem with mackerel fishing: On the one hand you have the anxiety that you might not catch anything at all and throw 50 good bucks of your food budget down the drain. On the other, you might hit the mother lode and face a much fouler problem. The fisheries division of the United Nations notes that Atlantic mackerel “will develop off odors after 1–2 days, will be soft and spoiling rapidly after 3 days, and will be putrid after 5–6 days.” As the Brooklyn VI rounded the jetty at Breezy Point and broke southeast toward the grounds, I found myself trying to come up with a game plan to avoid putridity at all costs.

After about two hours’ steam the boat slowed and began circling over what all hoped (feared?) would be a big school. Here’s where the dangerous part started. Mackerel fishing requires a multi-hook setup known as a “Christmas tree rig” tied to the end of your pole—three or four brightly colored teaser lures followed by a half-pound chunk of silver metal called a “diamond jig.” (The whole thing is not anywhere near as big as a Christmas tree, but to a mackerel it’s just as appealing!) Certain anglers push the Christmas tree rig into outright paganism by adding four, five, even 10 additional lures. In the frenzy of a big school, a pair of sunglasses is a good idea. It’s all fun and games until you get a Christmas tree in your eye.

And on this trip as soon as the opening horn blew the trees were flying. I lowered my own rig a few feet into the water and immediately boom, boom, two fish on. They were small, “tinker”-size fish, but since they were the opening salvo and mackerel can vanish as quickly as they appear, I kept them. On the next drop boom boom boom. Two fish of the “medium” sort and one a “jumbo” nearly two pounds. A third drop boom boom boom boom—but with a completely different fight. I reeled in to find a full load of herring on my Christmas tree.

“What do I do with these?” I asked the Bulgarian to my left.

Five hours later when the final horn blew, I stared down at the carnage in a kind of panic. I had about 50 pounds of fish on my hands, at least 100 mackerel and 50 herring, and they would all go bad extremely soon unless I dealt with them properly. I had bled the fish I’d caught by pulling out a gill raker upon capture and had put them immediately into ice, so I had probably bought myself an extra day. But I knew I would need more time if I was really going to eat through all this fish and live up to my reputation as a “sustainable” seafood writer. Looking to my left and to my right at Bulgaria and Korea respectively, I decided to employ the methodology of East and Far East to try to make the most of my macks.

“It’s very simple,” the Bulgarian hotel clerk said to me as we took up our positions at the filleting table. “You take the fish, you take vinegar, salt, water and some spices. You put the fish in this and you wait. In three days—perfect.”

“But what about the bones?” I asked, knowing full well that mackerel, like all the tunas, have a line of pin bones running through the center of their fillets and that herring were even bonier.

“No, no bones. These bones, these little ones, in the vinegar all of that, how do you say? Disappear.”

Later on when I read up on fish pickling online it turned out the Bulgarian was right. In a mixture of salt and vinegar all those little pin bones in mackerel and herring do indeed dissolve. Fish pickling, it turns out, isn’t just about avoiding putrefaction.

As to the Far Eastern side of the rotting mackerel equation, when I asked the Koreans what they did with their mackerel the language barrier barred all hopes of my determining what I knew was a well-established Asian method of pickling. “Sushi! sushi!” the two men told me when I asked for cooking tips. And so it was to that method that I turned when I came to my kitchen.

After lugging my stinking cooler through the subway and arriving exhausted back in Manhattan, still feeling the ghost of a gentle ocean roll under my feet, I set about parsing my catch to make a kind of descending ladder of mackerel consumption from super fresh to super preserved.

To begin with I took out the “jumbo” mackerel fillets and did them as sushi. The first step was to remove the clear epithelial skin on the fillets by taking the tail end of each fillet with one hand and placing a knife at a 45-degree angle between skin and meat. A gentle rocking of the fillet, right and left, will pull the knife just under the meat. A “V” cut into the center of the fillet will remove most of the pin bones. All of these jumbo fillets I then wrapped tightly in plastic wrap and put them in the fridge. These would last a day or two and would be excellent, almost tuna-quality sushi.

Then I turned to pickling. After scanning through a few recipes online, I settled on a great concoction called “glassblower’s herring” that worked equally well for mackerel. Knowing that the smaller fish would be best for pickling (since if I were to remove the pin bones from the smaller fillets there wouldn’t be much fish left), I put them to one side and prepared the ingredients. With the “glassblower’s” recipe the fish are first brined for 24 hours in a simple salt water. Then they are drained and put in a vinegar solution with red onion and lemon peel that makes a very aesthetically pleasing alternative to the usual sad, gray, Soviet-looking pickled product. All told, these pickled fish in their jars will last about a month in the refrigerator.

But even all this pickling couldn’t dispatch with the vast amount of fish I’d acquired aboard the Brooklyn VI, and I also knew that my long-suffering partner and our son would have a limit on how much pickled fish they could cram down their collective gullets. It’s then that I turned back to the very useful Web site noreast.com and asked members in the mackerel forum for their thoughts on preserving alternatives.

“I make something called ‘bratherring’ from an old German recipe of my grandmother’s,” one angler wrote. The recipe was simple: Coat the fillets in flour, salt and pepper; fry lightly; then cover in a vinegar-sugar-salt-spice brine for four days. Like the pickled fish, the brathered version lasts about a month and is particularly good served with sour cream.

The Noreasters had still more suggestions.

Another angler (“I was on the Brooklyn VI last Friday as well!”) suggested mackerel gravlax: layer fillets with a mix of sugar, salt, caraway and dill, wrap with Saran wrap, compress with a weight and refrigerate for two days. Pumpernickel bread and a good beer were suggested as side dishes.

All in all the whole process—fishing, sushi-ing, brining, brathering, pickling and gravlaxing—took up about a week of my life and produced meals that lasted the better part of two months. Were I a Neolithic caveman, this equation would have seemed pretty much the standard business of survival and indeed a certain primitive deadening of the thought process took over as I slipped the last few fillets into jars.

Looking at them all stacked up in the cupboard I felt both pride and exhaustion and a little bit of disgust. Over the next months I would eat it all. Every last salted, pickled, brathered, sushied frozen chunk of it. And now, a year later, as I scan the fishing reports and see that the mackerel run of 2013 is not shaping up very well, that they may not show up at all this year, I find myself both saddened and relieved. A mess of mackerel is both a blessing and a curse.

Paul Greenberg is the author of the James Beard-award winning New York Times bestseller Four Fish. He fishes in the northeast throughout the year but in winter he wouldn’t kick a nice warm Florida grouper charter out of bed.