“Not on the Menu” Seeks to Prevent Sexual Harassment in Restaurants 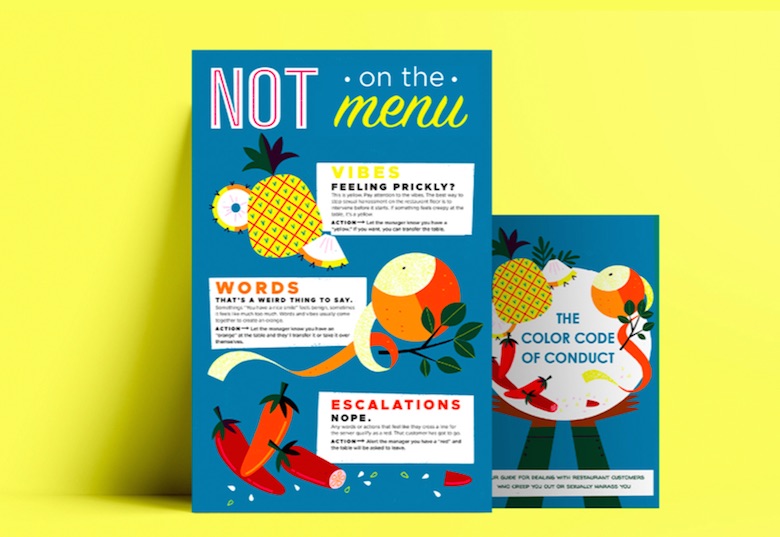 The poster and zine were designed by an all-female team. Photo courtesy Not on the Menu.

Restaurateurs and bar owners cannot excuse sexual harassment, but thus far a coherent movement hasn’t taken place in order to prevent the fact that 90 percent of restaurant workers experience harassment in the workplace at some point. Enter Oakland, California–based chef Erin Wade of Homeroom, whose new project, Not on the Menu, features a poster and a zine featuring her “Color Code of Conduct” that can be hung in break rooms and distributed to educate workers on their rights.

The poster provides a system for identifying harassment, from vibes, words, and escalations. Each gives a response and action that can be taken, so that victims won’t be at a loss for what to say. The zine defines “Reaction, Recourse, and Examples” for three levels of harassment, goes over “Impact vs. Intentions,” and gives a sample script for managers to use when harassment is reported.

This is the policy Wade developed for her own restaurant, and it has been named a national best practice by the Equal Employment Opportunity Commission. As she wrote in an op-ed for the Washington Post last year, the system was inspired by real-life experience:

The catalyst was a customer — ­ a father of four who had put his hand up the shirt of a busser clearing his family’s table. The busser was so stunned she didn’t report it, but the event sparked a flood of reactions from staff members who’d had similar experiences. At our meeting, women shared stories about harassment from customers and said that when they tried to report it to male managers, they were often ignored because the incidents seemed unthreatening through a male lens.

Thus the system was born, and now a portion of the proceeds from sales will benefit La Cocina SF, which provides opportunities in food business to immigrant and low-income women entrepreneurs. The un-laminated 11×17 poster sells for $9.99, and the laminated 24×38 for $19.99; the zine is $9.99. There are discount codes available in their shop.