How Are New York’s Organic and Grassfed Farms Faring Amid a Devastating Dairy Crisis?

Although they’re generally coping much better than their conventional dairy counterparts, “organic” is no longer synonymous with “safe” for farmers. 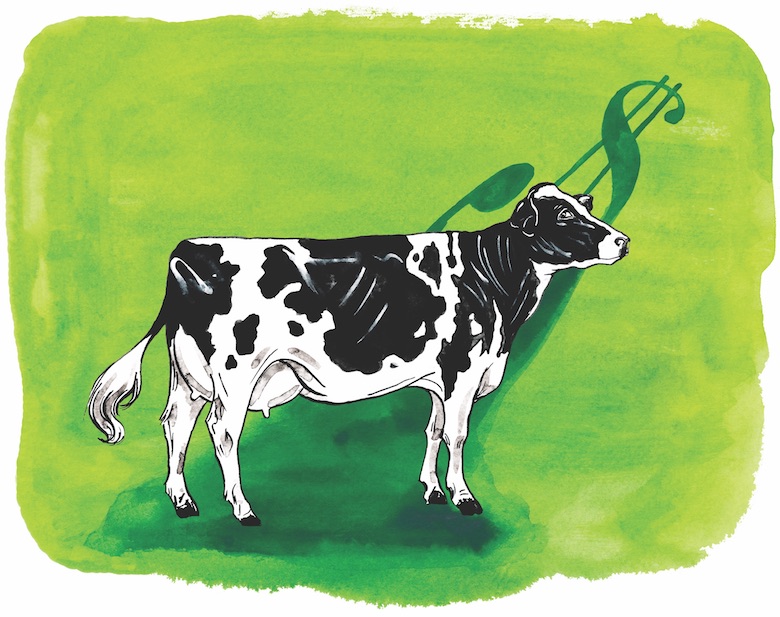 Farmers that sell into the organic market also say that, across the board, prices are not as variable compared to conventional, and some said being a part of a co-op structure like Organic Valley’s offers further stability.

On January 17, more than 30 organic dairy farmers—most of whom sell their milk to Organic Valley or Maple Hill—gathered at a farm near Syracuse, New York. The “emergency meeting” was called without the processors’ knowledge, and attendees discussed who had lost contracts, who had seen trucks from Texas hauling in cheap organic milk, and falling prices.

“The reason we had it was just to keep each other informed,” said Dave Nichols, a grassfed organic dairy farmer who sells to Maple Hill. “None of us really knew what was going on on the other side of the fence. The biggest thing we came away with was a new list of names, phone numbers and addresses.”

In other words, they’re scared of what’s ahead—and they’re trying to get organized.

The U.S. milk glut and accompanying drop in dairy prices over the past few years has hit New York’s landscape of small family farms hard. A December 2018 USDA report counted 241 fewer producers compared to a year earlier (and that number was 789 across the Northeast Marketing Area). Most farmers are being paid significantly less than what it costs to produce their milk, and one of the biggest buyers, Agri-Mark, included a list of suicide hotlines in a letter it sent to farmers in February 2018 announcing another price drop.

While local organic and grassfed organic producers—whose milk ends up on Manhattan shelves via brands like Organic Valley, Horizon and Maple Hill—are generally faring much better than their conventional dairy counterparts, “organic” is no longer synonymous with “safe” for farmers. As a result, choosing grassfed organic milk in order to support a local dairy farmer in the New York foodshed is more complicated than it seems. 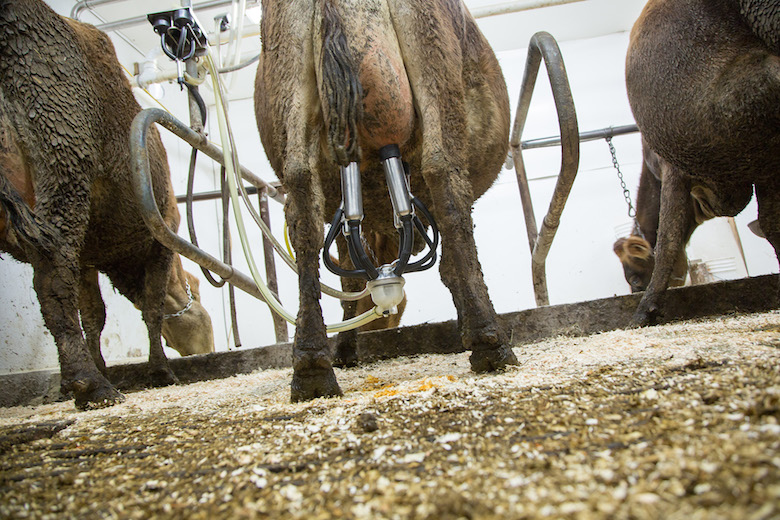 Maureen Knapp and her husband, Paul, run Cobblestone Valley Farm in Preble, New York, where they grow strawberries and raise pastured poultry on 300 diversified acres. The core of the business, though, is dairy, and in 2001, they officially received organic certification so that they could sell their milk to Organic Valley.

“We were struggling as a conventional farm because in dairy, you really don’t know what you’re going to get for your milk until the month after it’s left the farm,” she said, explaining that the financial benefit was the most important (albeit not the only) reason to make the switch, despite the initial costs associated with transitioning to organic. “For us, it was the best decision we ever made.”

Ten to 20 years ago, that was a common story. Today, the narrative is not as clear, and in most conversations with farmers, the state of the industry is reflected in their moods—despondent and resigned, cautious and defensive, or completely fired up. Shannon Rice-Nichols, a dairy consultant who was an organic dairy farmer in New York for several decades, is the latter. “It’s not any more stable than conventional,” she said in January of the situation for organic dairy farmers, right after learning that Maple Hill, a company committed to revitalizing New York’s family farm landscape, would be dropping 78 farms from its network, leaving many who had invested heavily in grassfed operations without a buyer. That was after word came through the rumor mill in December 2018 that another organic buyer that heavily markets its local sourcing had dropped 40 small dairy farms near the Finger Lakes and was now adding cheaper milk from large organic dairy operations in Texas to its supply. 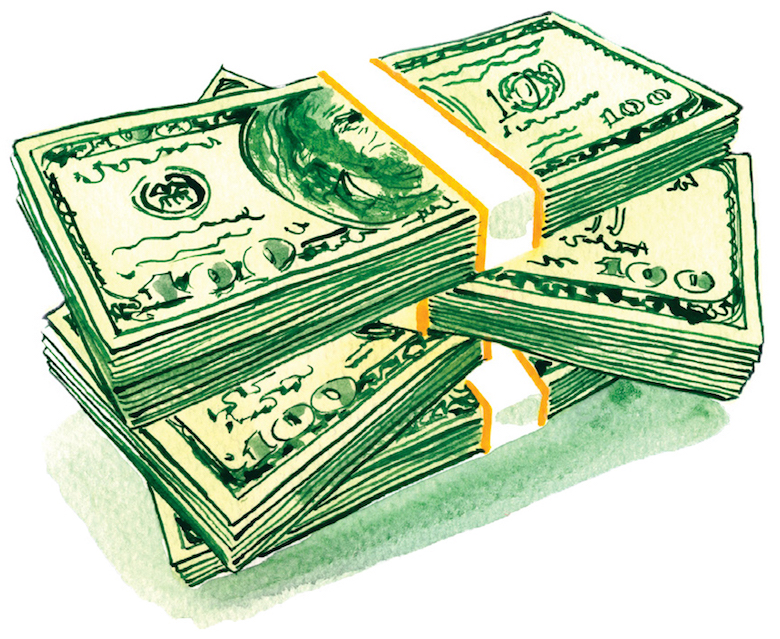 In nearly every conversation, this is the key issue: Since organic dairy was seen as a growing market up until the last few years, companies located primarily in Texas and the West invested in building large, industrial confinement operations where they could produce a high volume of cheaper certified organic milk. While they use organic feed, their ability to meet other organic standards has been called into question. Organic dairy cows must be on pasture 120 days a year, and experts say it would be impossible for many of them to meet that requirement given the number of cows and milking schedules.

There is also a rule called “origin of livestock” that many farmers and experts say is being interpreted differently by certifiers outside of the Northeast so that large industrial farms can essentially swap in new cows quickly, bringing down costs even further. Nonprofit watchdog the Cornucopia Institute published an entire report on these issues called “The Industrialization of Organic Dairy” in August 2018, and in a scorecard that ranked dairies on their adherence to organic standards, it found many to be “cheating.”

“This is a model that allows them to produce milk much cheaper, and we’re told here … that Texas has organic milk that can come in and be at the plants in Central New York for $26 or $27 a hundredweight [equal to 100 pounds]. So where previously our farmers were receiving $35 or $36 a hundredweight, prices last year to our farmers mostly dropped down to between $26 and $28 a hundredweight,” said Fay Benson, who was a New York dairy farmer for 20 years, seven of which he spent certified organic. Benson now works to support the region’s small farms through Cornell University’s Organic Dairy Initiative. “We thought that [price] was pretty bad, but now this year we just noticed that at least 29 farmers are going to lose their market.”

To further confuse the situation, some companies likely selling cheap milk from industrial organic dairies are also buying it from small New York farms. Horizon, for example, buys some of its milk from large dairies in Colorado, Texas and California. In its report, the Cornucopia Institute called attention to a California dairy the company once sourced from that housed thousands of cows and was stripped of its organic certification for violations, and to a Maryland dairy the institute found was not grazing its cows on a randomly selected day. (A representative from Horizon said it stopped sourcing from the California dairy before it was decertified, that it ensures there is “adequate pasture and grazing land” for all herds and that none of its dairies have ever been found to be in violation of USDA organic standards.) And among some New York family farmers it has a great reputation. Benson chose to sell his milk to Horizon, and Rice-Nichols and others said the company consistently pays higher prices than other buyers. 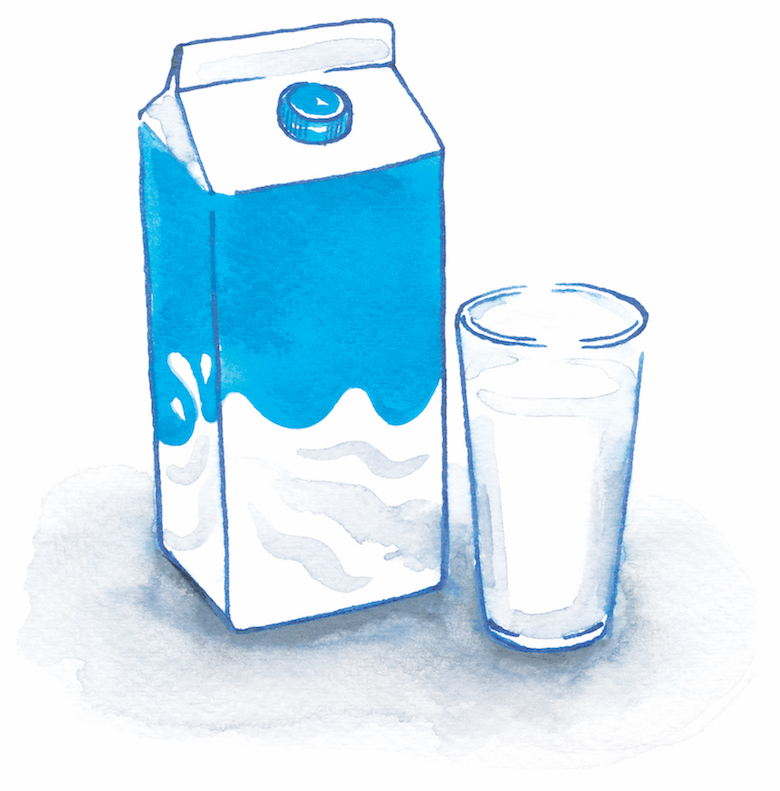 As mentioned, the situation is also affecting Maple Hill, even though its branded dairy exists in a different category—grassfed organic. The market for 100-percent grassfed milk is still strong, but since Maple Hill set out in 2009 to create a new supply chain, it’s been balancing costs by selling into the (grain-fed) organic milk market. For instance, if the company was building a new route and had too much milk, it would sell excess into the regular organic market, explained founder Tim Joseph. It was also able to sell organic milk from farmers in transition to grassfed. Those market opportunities have now disappeared, while freight costs (a huge issue for a young company still establishing farm routes) have gone up.

“We have always balanced into organic and were taking a hit, but that was sort of the cost of doing business and growing,” Joseph said, “but when the organic market falls apart and the conventional market is in the abyss, and we’re balancing either into organic or conventional, the negative price spread is even worse than usual. The brand is still growing, but the complexity of being a brand connected to our own milk supply has increased.”

Finally, many dairy farmers and industry analysts point to the rise of “fake” plant-based milks as a reason the dairy crisis is hitting organic. According to statistics, Americans are drinking less cow’s milk and more plant-based alternatives like almond, soy and oat. That’s especially true among high-income consumers who shop based on values like health and sustainability, who likely would also choose organic milk. New York City is a prime example: Demand for Oatly is so high, cafés in Brooklyn faced shortages in 2018. 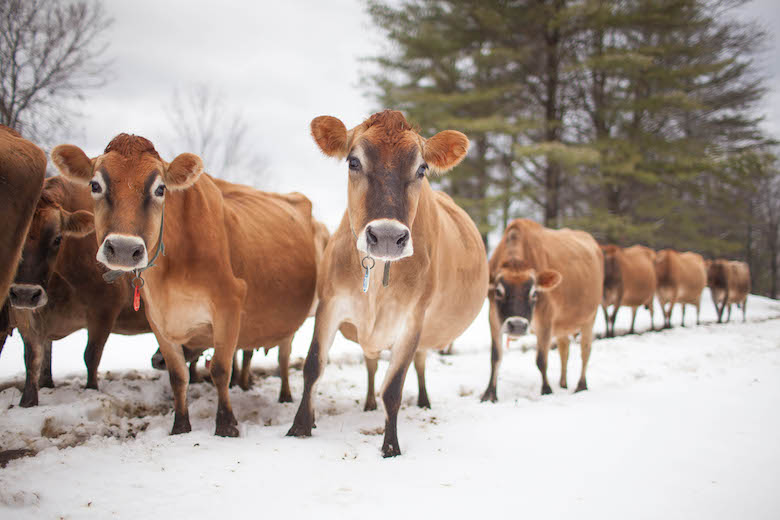 According to statistics, Americans are drinking less cow’s milk and more plant-based alternatives like almond, soy and oat.

Despite all of this, organic and grassfed dairy farms are still doing much better than conventional dairy producers.

The price premium, for one, is massive. Organic Valley operates as a co-op, and its members include more than 2,000 farms in 36 states, about 160 of which are small dairies in New York. Chief mission officer Melissa Hughes said the average price it paid New York farmers in 2018 was just over $30 per hundredweight, compared to just over $15 in conventional. That price did drop over the past few years, and Organic Valley is operating on production quotas for some farmers.

Farmers that sell into the organic market also say that, across the board, prices are not as variable compared to conventional, and some said being a part of a co-op structure like Organic Valley’s offers further stability. (Others who do not sell to Organic Valley said the co-op model offered few benefits and that it tends to pay lower prices than other buyers.)

Dave Hardy has owned his farm in the Mohawk River Valley for 25 years and has been an Organic Valley member since 2003. He said the co-op model came with a sense of agency thanks to farmer involvement. “There’s a lot of say about what goes on, there’s a lot of opportunity for the members to be involved, and then the transparency we have…” he said. “[The price] has changed in the last few years according to the market forces, but we know what the price will be from month to month if there is a change that’s going to happen.”

Meanwhile, while grassfed organic is a harder production system to learn and the initial costs tend to be higher than transitioning to organic because of the learning curve and yield loss, Maple Hill pays an even higher price premium to its farmers, which Joseph estimated was between $38 to $40 per hundredweight in 2018.

“We’re as tight as can be—we’re still overcoming our start-up costs and getting everything established. It hasn’t been long enough for that to happen yet, but I don’t see it as something that’s not doable,” said Jim Haman, a third-generation dairy farmer in the Mohawk River Valley who transitioned to grassfed organic in 2014 and began selling to Maple Hill. “If I was in conventional, we would have been gone a long time ago. It’s the only way we’ve been able to keep farming, and I don’t see anyone else optimistic in dairy right now. Yes, there are cutbacks, but at the same time, I can pay my bills.”

Photographs by Lindsay Morris and illustrations by Lily Qian

The above text has been updated from the print edition to clarify that Horizon’s affiliations with dairies in question have not been concurrent with the dairies’ violations of USDA organic standards.