From Midtown Hotels to Brooklyn Farms, Everyone’s Buzzing About Bees

September is awash in honey, but what’s really helping the bees? 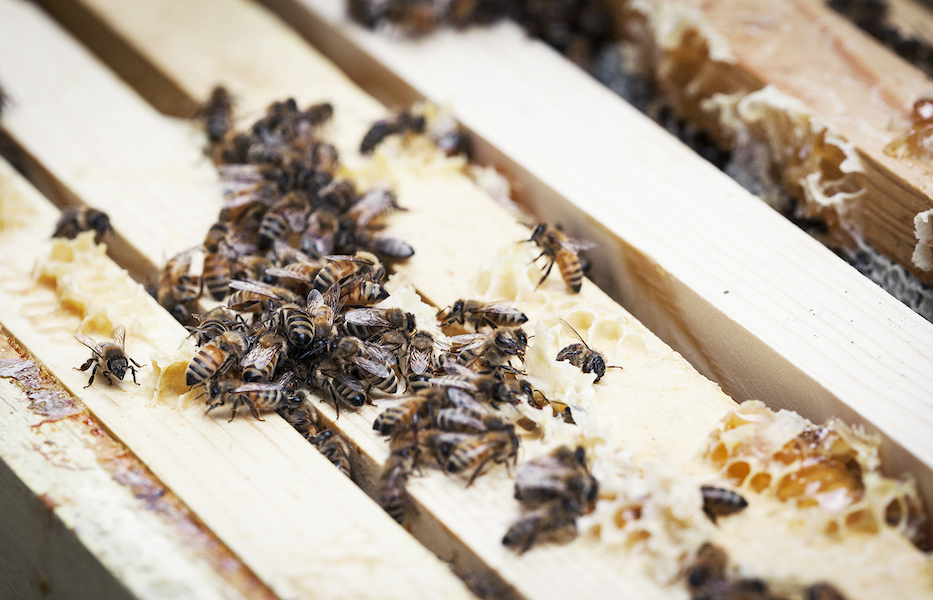 Honeybees are the new rooftop stars at the Hilton Midtown, which is introducing a beekeeping program. Photo (of a different hive) by Michael Rudin.

On a slightly overcast but mild late summer morning, 450,000 honeybees arrived by yellow taxicab to the Hilton Midtown. The celebrity insects made their way along a red carpet, escorted by beekeeper Andrew Coté, past a waiting crowd and up the elevator to the fourth floor to check out their new urban rooftop beehive.

Known as “Bees on Sixth,” the Hilton Midtown is hoping the honeybees and their six new hives will put a spotlight on bees and sustainability, while creating delicious honey additions to crostini, lamb sliders, pizzetta and more.

“Being able to have my own honey is going to make the food more interesting for the customers,” said Hilton Midtown executive chef Richard Brown.

These days it seems like everyone is buzzing about bees. Sierra Magazine estimates there are roughly 120,000 amateur beekeepers throughout the U.S., and the New York City Beekeepers Association (NYCBA) puts the number of beehives in New York City at around 500. Companies like Cheerios, Häagen Dazs and too many more to name have done campaigns around bees, but while we’re awash in honey, is any of it really helping the bees?

“Anything that brings awareness to the cause is welcome,” said Margaret Lombard, chief executive officer of the National Honey Board.

But the NYCBA, whose founder assisted with both the Cheerios commercial and installed the Hilton Midtown Bees, was more skeptical.

“In the case of the latter [Hilton Midtown], there is a genuine desire to do right by the environment. In the case of Cheerios, since their product contains more sweeteners that are not honey than honey, it feels a bit dubious,” said Harry Lime of the NYCBA.

Honeybees and other pollinators are a $15 billion industry in the U.S, responsible for at least a third of our food supply. If you took them away, 52 percent of the items in your neighborhood’s Whole Food Market’s produce section would disappear with them.

It’s a startling thought, compounded by the fact that honeybee hives are dying at alarming rates. Between 2005 and 2013, hives died at an average rate of 30 percent. In 2014, it was 40 percent. The reason for the collapse of the hives isn’t clear, although theories include disease, a parasite, pesticides, extreme weather, poor nutrition and then colony collapse disorder, which simply means mass deaths for unknown reasons.

While urban beekeeping is far from easy, beehives—at the Hilton Midtown, Brooklyn Grange and your roommate’s hobby hive—may help stem the loss. In the past year, there’s been a three-percent rise in honey bee colonies in the U.S.

According to Coté, greater availability to different plants and less pesticide usage may make urban beehives the future and overtime the lack of pesticides could benefit the genetics of the bees.

In the short run, you can help the bees by purchasing locally produced honey; start at the farmers’ market and try to speak with the beekeepers personally. Then get drizzling.