With only about a couple years’ data, how accurately can these businesses pinpoint the main factors for customer retention, and how high of a priority should packaging be until they can? 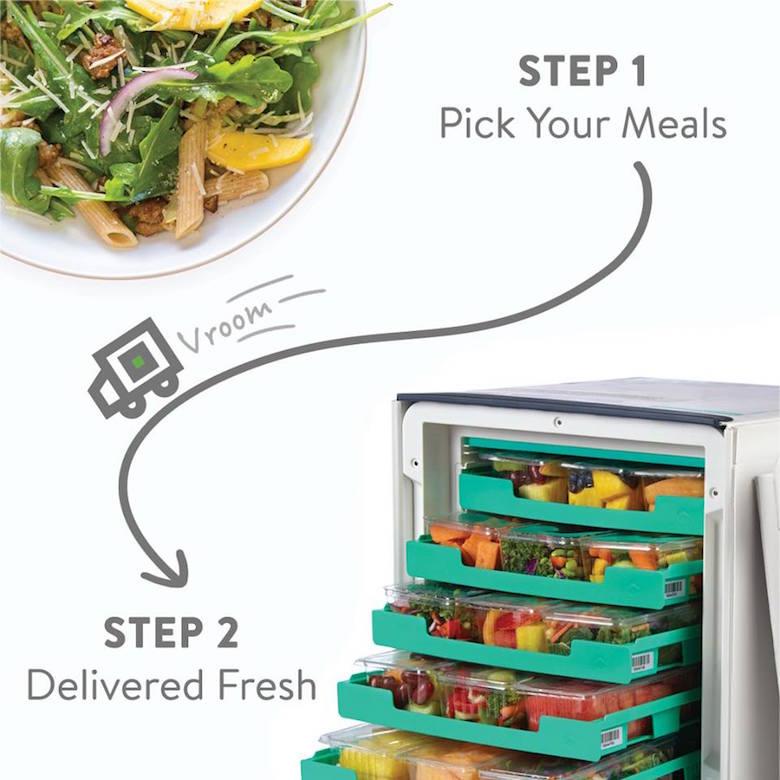 FreshRealm, which launched in the West Coast late last year and the East Coast earlier this spring, is a relative newcomer that touts the reusability of its cold-insulating packaging vessel. Photo credit: Facebook/FreshRealm

For anyone who wants to cook more but doesn’t want to shop, meal kit delivery services might seem like a good option. The high adoption rate of this new industry has prompted estimates of 5 billion growth over the next decade. It has even propelled major food conglomerates and retailers like Tyson and Amazon, as well as news organizations like the The New York Times, to jump in on the bandwagon.

Additionally, what many of these “meal kits” or “recipe boxes” tout as a competitive advantage over simply buying ingredients and cooking recipes found yourself is the promise of creating less food waste. But a frequent concern amongst its customers has in fact been their volume of waste—at least in packaging, that is.

“I picture a couple tomatoes rotting in a field, and an image of a couple thousand plastic bags in a landfill, and I’m much more comfortable with former,” said Michael Ray Robinov, principle of the online grocer Farm to the People and the meal-kit delivery service Quinciple. “[The bags] will still be here when my grandchildren are around.”

The logistics and coordination of implementing such packaging recovery efforts, especially when a company is growing, can be tricky to figure out, though. They also create an additional operating overhead, not to mention taking up precious time and resources.

Robinov says that’s why he’s concerned about packaging waste solutions for his brands, and he’s not alone. Blue Apron has rolled out a free cardboard box recycling program where customers are given the option of printing a return shipping label to slap on their box and set it outside for Blue Apron to pick it up. It’s similar to the recycling program currently in place at Marley Spoon, a European-based meal kit service which recently relaunched stateside in partnership with Martha Stewart as “Martha and Marley Spoon.”

“This [packaging decision] was both in response to customer requests, and as a company, we wanted to minimize our environmental impact,” said Jo Ferro, PR manager for Marley Spoon. However, she recently noted that the company is planning to phase out the pickup program due to the fact that most consumers found it easier to recycle their boxes through existing curbside pickup services. Soon, the company will simply advise customers to recycle the boxes through their appropriate municipal channels, which is how Marley Spoon operates in its European markets. “Handling waste this way is actually more environmentally friendly, and due to our expansion across the country, the packaging waste will travel less and to a local source,” said Ferro.

When your cat realizes you recycled his favorite box…

“We have discussed the possibility of a return program for our packaging, but we are still in the process of figuring out how that will work,” said Kate Horgan, senior director of operations and logistics at Plated, another large player in the space. As of now, the company has chosen to focus on reducing packaging waste by using cardboard boxes, which are already recyclable curbside in most municipalities, as well as choosing to partner with a cold-pack maker that uses only 100 percent recyclable content.

To operate a delivery-based service in general, packaging waste is pretty tough to avoid. Customers are accustomed to disposable trays, bowls, cutlery, bags and napkins galore from food delivery. But for these kits, waste multiplies with each order. We’re talking not only cardboard boxes and recipe print-outs, but excesses of disposable materials for individual and pre-measured ingredients like a tablespoon vinegar and a snip of fresh herbs. Some disposable serveware may have gotten a little more biodegradable, but it is no less waste created for a convenience that comes at the expense of more packaging waste and, well, more money.

“For me, one of the most difficult challenges to a meal-kit company is the packaging,” Mark Bittman wrote in February to subscribers of Purple Carrot, the meal-kit company that he joined as Chief Innovation Officer in late 2015 and resigned from early this year. “Of course, we spend a lot of time thinking about what food goes in the box, but also the bags, sleeves, and ice packs. We’re trying to reduce the packaging we must use, and to make it as eco-friendly as possible. So this week, you’ll notice that the ever-present garlic—included in most meals we ship—is one entire head, loose in one of the bags.” Bittman went on to say that this change would likely result in extra garlic, and, “lucky you.”

FreshRealm, which launched in the West Coast late last year and the East Coast earlier this spring, is a relative newcomer that touts the reusability of its cold-insulating packaging vessel. Promising to keep ingredients chilled until around 9:00 p.m. on the day it’s delivered, it’s something of a mini-fridge sheathed in corrugated plastic and polystyrene. The vessel has multiple trays filled with ice packs and individually-packaged ingredients in modular, plastic boxes—a pint of cherry tomatoes in one, a couple chicken breasts in another. All told, the box is heavy enough for me to struggle a bit moving it around my apartment, even though it has sturdy handles.

While a reusable shipping and cooling container is a welcome addition, FreshRealm’s other food packaging inside the vessel itself consists of the now-familiar disposable trappings of many other meal kit deliveries—even a lemon and an avocado are given their own packaging and, often, labels to indicate which recipe they’re intended for.

“What we were trying to build from day one is a program that can be part of your life every week. And to accomplish that, it’s a bit more complicated than, ‘Let’s just change the packaging,’ it needs to be a fully integrated solution into your model,” said Michael Lippold, founder and CEO of FreshRealm.

“There’s some simple trade-offs in that we have to pay the reverse logistics to get the box back and we sanitize it,” said Lippold of the shipping vessel. “The offset to that is the packaging is reusable.” Lippold said that the company has been testing to increase the durability of the entire shebang of a shipping vessel, which the consumer leaves for pickup via a shipping label. But the sweet spot to making such a thing profitable intersects both consumer demand and design: “To summarize, there’s reverse logistic cost but there’s less packaging cost.”

When it comes to smaller, regional meal kit delivery services, packaging waste seems to be more manageable. Potliquor, a San Francisco-Bay Area-based prepared food subscription service, describes itself as a “modern milkman.” But rather than just bottles of milk, entire meals are packed into wooden crates and mason jars, for the most part. “Occasionally it’s a disposable pie pan or a basket or plastic bag. But people give us their old ones,” said Jennifer Lynch, its co-founder, of the staple crate and jars. While she and her partner Laura McGrath, both caterers, currently serve only about a dozen customers weekly, they’ve implemented a $25 deposit for the crates and jars that food is delivered in, and have found it effective. “People definitely do want to give them back to us,” said Lynch. “People say, ‘I cook this all the time now because I tried it in your crate,’’’ Lynch said of her customers at Potliquor. “So that’s wonderful.”

If charging a deposit for packaging seems to be an effective solution to curbing waste, why haven’t major, nationally-operated meal kit services embraced it? According to some, this avenue was “considered,” before ultimately choosing curbside recycling or freight pickup . It might be worthwhile to note that a deposit for cold-packaging was introduced by Good Eggs, the fresh food delivery service that shuttered in all markets except for the Bay Area last year (although they did recently raise $15 million to once again expand across the country). And besides packaging, there are a lot of other points of customer satisfaction for this fledging meal-kit delivery service to consider. With only about a couple years’ data, how accurately can they pinpoint the main factors for customer retention, and how high of a priority should packaging be until they can?

Perhaps the biggest question for meal-kit companies then may not be about sourcing the best ingredients or decreasing waste or offering the most unique meal options. Instead it might be how long their fussily-packaged services will actually be relevant to a user base who is gaining more experience in home cooking. This remains to be seen, but for an industry that seems to grow and get more crowded by the minute, meal-kit companies have a lot at stake. The smaller fish in the pond may have little trouble reducing packaging waste, but for the big investment-backed, national brands, every customer concern—like recycling—matters.