The trials, tribulations and unexpected joys of being a poultry farmer in November. 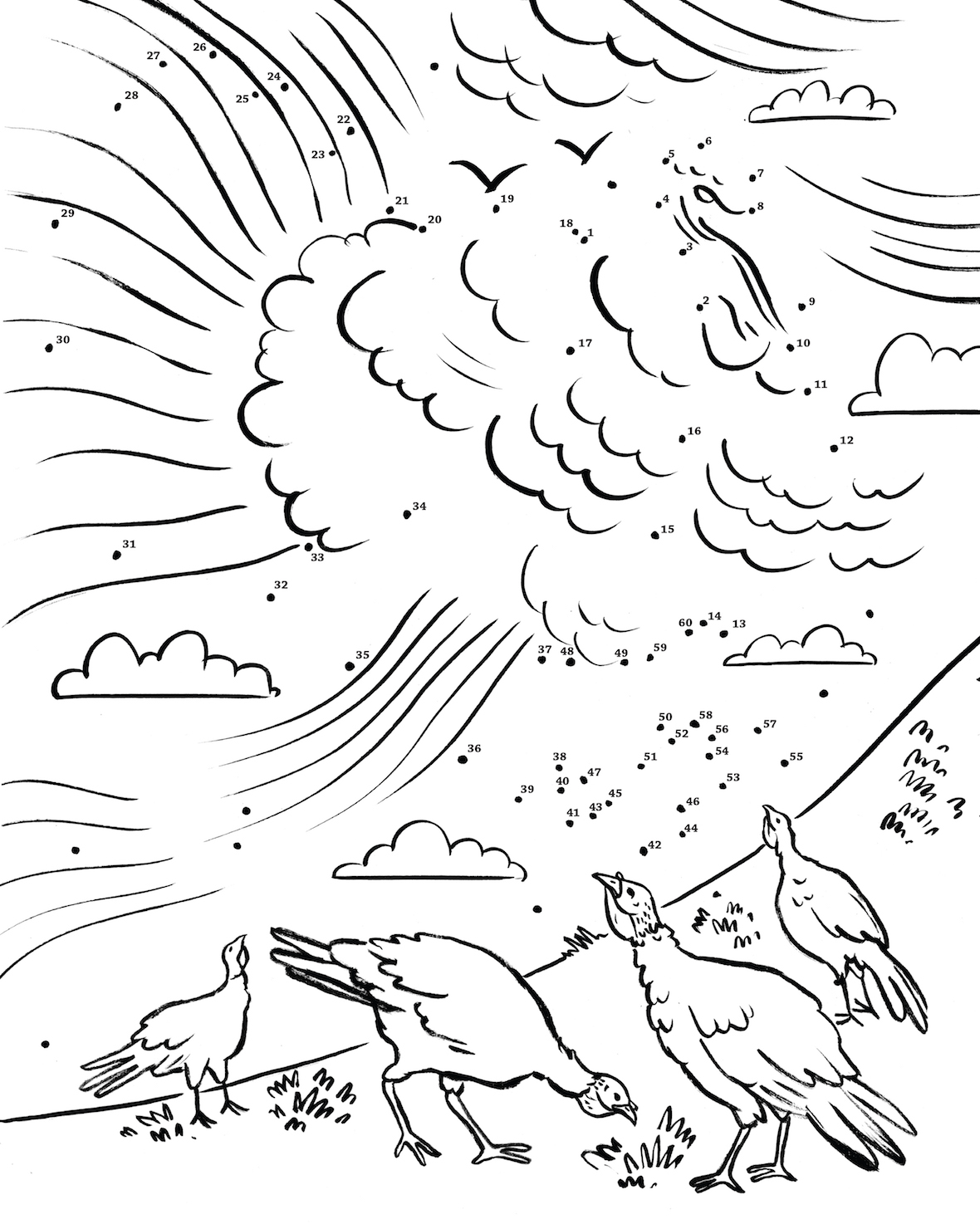 Connect the dots and color in your own celestial turkey by clicking the image to download a PDF version of this illustration. Credit: Maëlle Doliveux

For farmers, the weeks leading up to Thanksgiving are like a marathon. They start training months before the big day, and until they make the final push across the finish line, anything—erratic weather, predators, equipment breakdowns, knives freezing to the butcher block, foxes, you name it—could happen.

This is true for operations of all different sizes. Shocker, but most of the turkeys in this country do not come from low-input, diversified farms like the ones you’re likely to find at the farmers market or high-end butcher. As you might suspect, the majority of turkeys in this country come from many large concentrated operations that individually produce well over 100,000 birds a year.

These broad-breasted whites—a commercial breed intended to grow fast and busty—spend most of their lives in a windowless warehouse where they are fed a steady diet of corn-based feed that’s peppered with antibiotics to fend off disease and boost poundage. These conditions can have many negative effects on a turkey’s overall health, not to mention the surrounding air, soil, water and long term effectiveness of the antibiotics. Because of this model though, the total number of turkeys raised in the United States last year reached 233 million according to the USDA (a 2 percent drop from 2014) and for Thanksgiving alone, American families purchase roughly 45 million of these turkeys. That’s almost one-sixth of all turkeys sold annually in this country if you do the math.

In contrast, Union Square Greenmarket vendor Mary Carpenter at Violet Hill Farm in Winfield, NY usually raises 250 broad-breasted whites and broad-breasted blacks, which are similar to the whites in build, but smaller in size. They also tend around 150 guinea hens for customers looking for something smaller or for those who just simply don’t like the traditional holiday fowl. Mary also typically raises about a dozen heritage breed birds for the few folks who want them, but as she recently told me, “the fox trumped the farmer this year” and got all of this season’s pedigreed birds. For better or worse (i.e. fields or predators) in this case, the majority of all their birds’ rearing is on pasture, and Violet Hill handles all the holiday ordering themselves, meaning they can likely tell you who exactly is eating what animal on the big day.

Almost the only quality that these two rearing examples share is that they both raise broad-breasted whites for consumption. According to Carpenter, this bird has what most customers want: a large frame with lots of meat. The majority of heritage breeds are generally smaller and tougher in contrast, hence Violet Hill’s small brood and even smaller demand. Regardless of breeds, though, Carpenter and her husband work hard to “create the best possible circumstances” for all of their birds, meaning no GMO feed, plenty of access to pasture and no unnecessary antibiotics, hormones or steroids. Achieving this bucolic dream is more than a full-time job, though, especially since different breeds have different needs.

For broad-breasted whites, it all starts at the post office around midsummer. Dozens of poults, or baby turkeys, arrive in the mail from a hatchery in Pennsylvania. Meanwhile, a much smaller group of heritage birds lives on the farm—along with cows, pigs, sheep, rabbits and chickens—year round. These hens lay their eggs at the beginning of each year to both repopulate the flock and pass on the males for turkey dinners (it’s important to keep several females of each generation for breeding since only one male bird, or tom, is needed to fertilize multiple females). 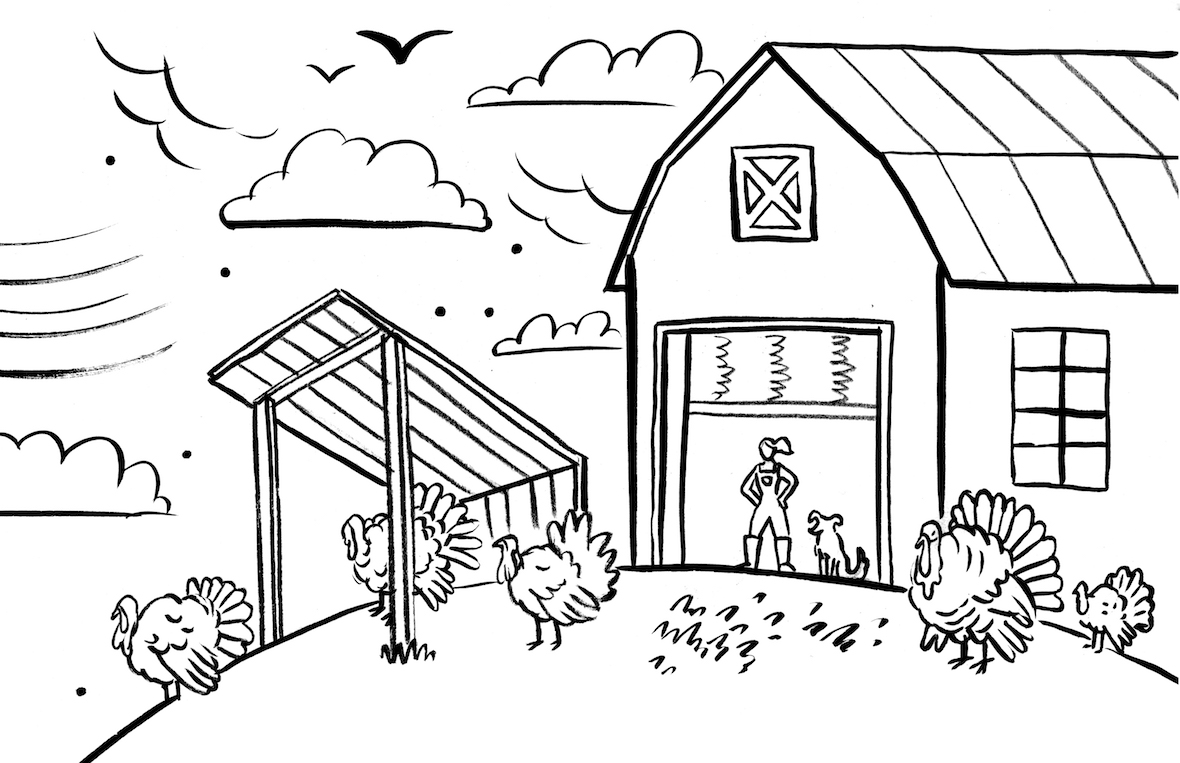 Violet Hill handles all the holiday ordering themselves, meaning they can likely tell you who exactly is eating what animal on the big day. Illustration credit: Maëlle Doliveux

All poults, though, are like any other baby in that they need fresh food and water and to be kept clean and warm. This all entails infrastructure, time and hands-on management: Think having to dip each individual poult beak into a water source so that it knows where to find it on its own, keeping their brooder at the proper temperature and making sure that their shelter is frequently cleaned to prevent any potential diseases from spreading—then repeat as needed for four to five weeks until they’re put to pasture.

At this point, they should be able to weather most of the elements but are still vulnerable to attacks from predators, severe storms and other environmental challenges. They roam on the grass and need to rotate between different swaths of pasture frequently since, at least in the case of Mary’s birds, they’re known to quickly mow grass down to the dirt. But grass alone won’t get a bird to weight before T-day. Carpenter keeps 500 pounds of feed at their disposal at any given time, which requires significant heavy lifting and some additional equipment costs (the great workout before Thanksgiving dinner is an incidental bonus).

To be clear, though, Carpenter’s family loves this work. She loves watching sunsets from the hayfield where the turkeys graze and likes to observe them as part of the life and progress of her farm. She’s also grateful to raise them on fresh grass where they can move freely and poke the dirt for bugs. She finds the turkeys to be “quirky little funny animals” that keep later hours when there’s a full moon and develop a recognition for her presence; as soon as the birds hear the vehicle approach their pen, they all rush to the fence, stand and gawk at her while waiting for feed.

She starts working Saturdays to process turkeys while also staying up late after a full day of butchering to respond to a few dozen daily e-mails and calls about bird reservations. When she and her husband, Paul, have finished the final evisceration and packaging, they start making several eight-hour round-trip city commutes during the week before the holiday to deliver birds to restaurants, distribute a few at market and tote the remaining birds to town for any last-minute customers.

The good news is that all this hard work is paying off well. Although Carpenter’s birds are measurably more expensive than the average Butterball ($5.50/lb. versus about $1.35/lb.), she’s selling out and Violet Hill’s turkey business is growing. They’ve steadily gone from raising and selling 70 turkeys a year to about 270 and, according to Carpenter, she’d even put on an additional 75 to 100 birds to satisfy demand.

What's that? You haven't ordered your turkey yet? Don't worry, you still can! For fresh pickup in Our NYC markets, www. Violethillfarm.com to order! Want something super special, get one of our birds smoked from @meatandsupplyco Check them out and order today!Completely not interested in cooking for your family? Book your own dinner @maisonmayvanderbilt. Seriously, you can't lose!! #smallfarmsupporters

A high demand doesn’t always mean that Carpenter will have one of her own birds on the dinner table come Thanksgiving, though. There have been some years when her family is too exhausted to cook, but most of the time, they’re likely to have a turkey that has been deemed too “damaged” to sell to a customer. However it pans out, Carpenter takes satisfaction from honing her process rather than tasting the final product. She considers “sharing with people” to be its own reward and feels her greatest successes when her fellow farmers request her turkeys—they’re the ones who know what it takes to raise one, after all.

Don’t miss your chance to snag one of Mary Carpenter’s turkeys for the holidays! Active at Union Square and McCarren Park Greenmarkets year round, Violet Hill is now taking orders for the holidays. Find turkeys at $5.50/lb alongside Violet Hill’s “organically fed, free-range eggs for baking, sausages for stuffing and whatever else we happen to come up with that time of year!”

Eleonore Buschinger contributed reporting. A version of this story was originally published on November 25, 2014.