The Street Vendor Project thought a bill that would eventually double the number of food vending permits had garnered enough support to pass, but council support seemed to wane in the last few weeks. 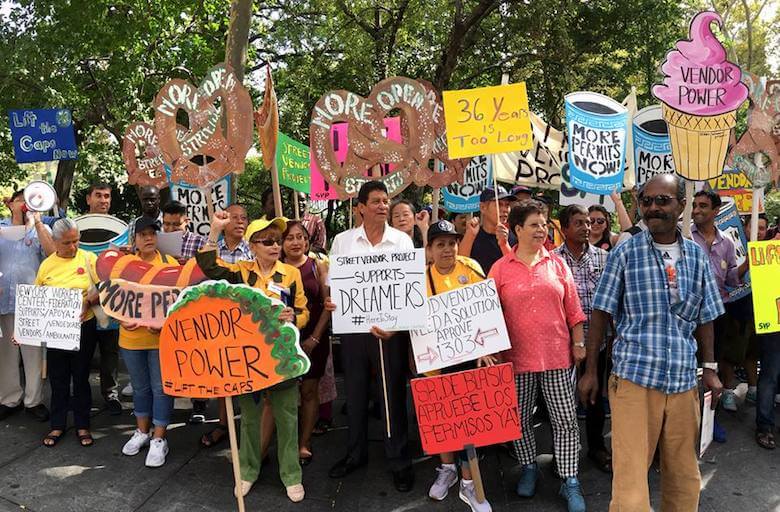 About four years ago, the SVP kicked off its “lift the caps” campaign requesting that the city issue more vending permits. Photo credit: Facebook/Street Vendor Project.

New York City streets are home to an array of food vendors with a culinary diversity representative of the city’s rich immigrant population. An estimated nearly 20,000 vendors sell elotes, Chinese rice noodles, coffee, samosas and everything in between. However, because of a decades-long cap on the number of permits issued by the city, many of those vendors are operating illegally or paying exorbitant fees to lease permits on the black market. Efforts to increase the number of food vending permits stalled in City Council at the end of 2017, but street vendors and advocates hope to move legislation forward this year.

In 1983, the city capped the number of food vending permits at 3000. Add on a few more permits specifically for the outer boroughs, the summer season, and disabled veterans and you get maybe 5000 permits, according to Matthew Shapiro, senior attorney at the Street Vendor Project (SVP), part of the Urban Justice Center.

“The problem is that the people who have had these permits have been able to renew them in perpetuity,” says Shapiro. Renewals from the city cost $200 every two years, but the massive gulf between supply and demand immediately created an underground market where permits are leased out for up to $25,000. “There are many vendors that can’t afford that price, so they operate without a permit, risking fines, property confiscation and arrest.”

About four years ago, the SVP kicked off its “lift the caps” campaign requesting that the city issue more vending permits. At the center of this campaign is the Street Vending Modernization Act, introduced in City Council in 2016, which would double the number of permits over a period of seven years and ensure fair and consistent enforcement. The bill gained momentum in 2016, but faced opposition from the real estate industry and business improvement districts—groups that represent property owners in a neighborhood—who argue that vendors compete with brick-and-mortar establishments, despite evidence to the contrary.

SVP thought the bill had garnered enough support to pass in a vote at the end of 2017, but council support seemed to wane in the last few weeks and the vote was postponed. “We are going to continue to make sure the mayor makes this a priority,” says Shapiro. “He has said numerous times that he wants to work on this, and we are hoping the new City Council speaker Corey Johnson will be committed to getting something done in the next few months.”