Learn About Emmer With Gramercy Tavern, GrowNYC, Foodstand and Others

The event brings together voices from agricultural and culinary backgrounds to discuss how to grow it, how to use it and what it tastes like. 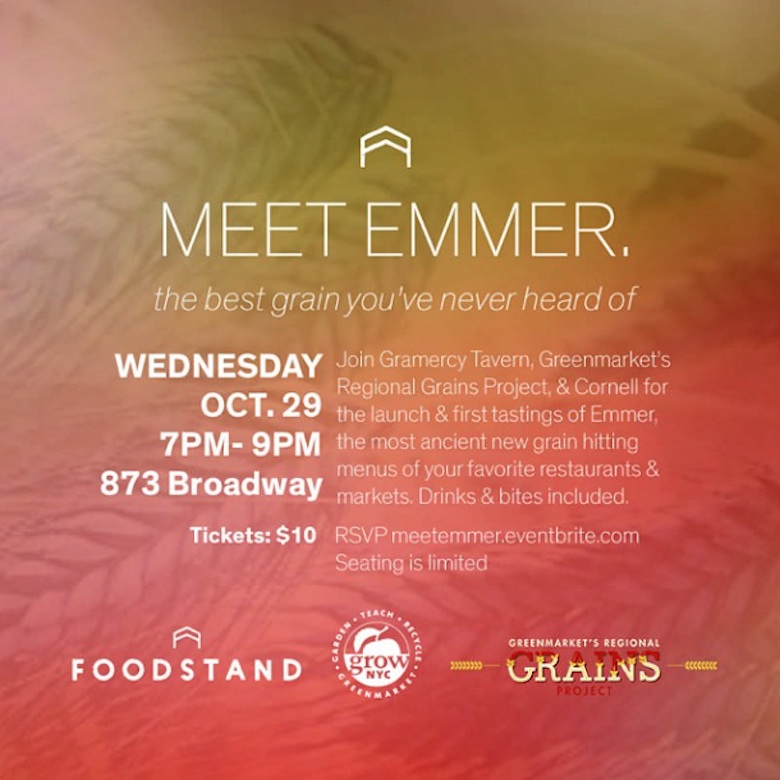 Emmer, a grain that was widely cultivated in the ancient world (the word itself wouldn’t sound out of place if mentioned in the same sentence as the gifts from the three wise men) is making a comeback. The grain has been found in tombs dating back as far as 17,000 BC, and a wild strain was rediscovered in 1906 in present-day Israel. It was used along with barley as a primary ingredient in beer (searching online, I could only find one mainstream beer that still uses emmer, check it out at the German Beer Institute) and is mistranslated in many Greek and Latin texts as spelt. Interest piqued? You can join Greenmarket, Gramercy Tavern, Cornell and Foodstand to learn more about the grain and its place in New York agriculture this Wednesday.

The event, which is part of Greenmarket’s Educated Eater series, brings together voices from agricultural and culinary backgrounds. Panelists include Jenny Jones at Gramercy Tavern, Lisa Kissing Kucek from Cornell and Kate Galassi of Quinciple. You’ll learn more about Greenmarket’s Regional Grains Project, which is using a uniquely vertical approach towards revitalizing grain production in the Northeast by connecting farmers, breeders and chefs and brewers (this is the same project partially responsible for Brooklyn Brewery’s beloved Greenmarket Wheat.) The specific focus on emmer will explore how to grow it, how to use it, and, most importantly, what it tastes like. As a bonus, attendees will be able to participate in a “preference tasting” of four different varieties currently being trailed for research and on Northeast farms. Tickets include samples and drinks.