A study of Musk’s approach shows it can work in areas that the private sector has largely ignored and where government and nonprofits have struggled. 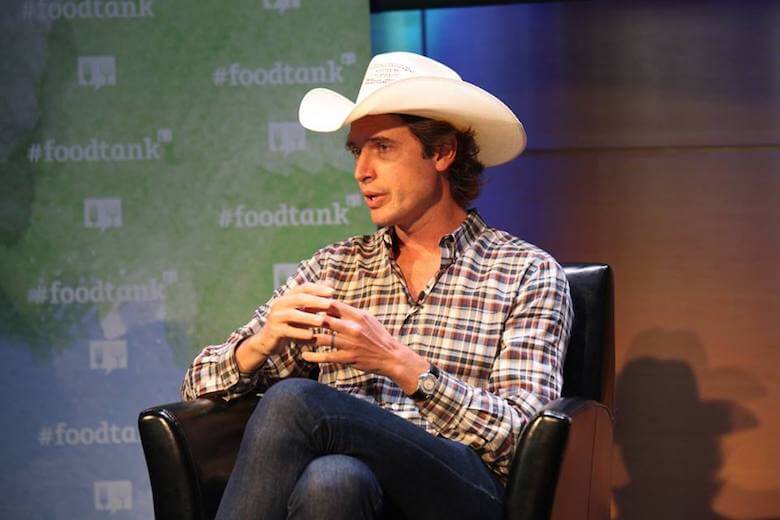 Kimbal Musk has long been saying that tech’s relationship with food is not yet strong enough. Photo credit: Facebook/Food Tank: The Food Think Tank.

Editor’s note: We kicked off our first annual Food Loves Tech event last summer in Chelsea—here’s a recap. We’re bringing a taste of the food and farming future back this year, but just across the East River at Industry City. This story is part of an ongoing series about technology’s effects on our food supply.

It’s a little-known secret in the food industry that Kimbal Musk is changing the way our collective food chain operates. Much like his elder brother, Elon, is causing a dramatic shift in how we travel with Tesla automobiles and the still-rough Hyperloop ambitions, Kimbal Musk knows we still have a long way to go in how technology influences and changes our food industry. His Square Roots vertical farming accelerator in Brooklyn utilizes the cityscape to grow food, and his bistro concept The Kitchen is a community of restaurants across America’s heartland that delivers sustainably grown food in an accessible and engaging way.

But, despite his vast strides in introducing more technology into the food industry—a job for which he was practically bred, with a dietician mother and engineer father—Musk believes this is only the beginning for the industry.

At a Food Tank Summit on September 13, 2017, I tweeted an interesting, and later, very controversial, statement by Musk—one cited in a recent New York Times analysis of his contributions to the industry. He said: “Food is one of the final frontiers that technology hasn’t tackled yet. If we do it well, it will mean good food for all.” His statement, and this tweet, set off a string of responses, mostly curt and ad hominem, though some with legitimate points that the food industry has been a leader in technology innovation and adoption, even if it remains one of the most analog parts of our life. The comment, on which Musk quickly doubled back, was strange coming from a man who Entrepreneur dubbed a “Farm-to-Table Founding Father” in 2011. How could someone so ingrained in this world overlook the progress technology encouraged in the industry.

"Food is one of the final frontiers that technology hasn't tackled yet. If we do it well, it will mean good food for all." @kimbal #foodtank pic.twitter.com/6cyv0VsW8Q

Despite rephrasing what he initially meant, Musk has long been saying tech’s relationship with food was not yet strong enough. Last year at the New York Times Food for Tomorrow conference, where he and Dan Barber seemed to spar on this very point, Musk remarked that 99 percent of our food is grown in soil today and just 1 percent is grown indoors under lights. He acknowledged that while indoor agriculture isn’t an immediate solution to our problems, there is nearly unlimited potential for it to complement how we grow most of our food today.

Admittedly, the tweet was read out of context, but I found this sound bite compelling enough to share with the world. Musk had just been asked a question about digital technology (AI, robotics, big data) being incorporated into our lives—from the farm to our tables. The premise of the question acknowledged there are plenty of ways in which our food system is antiquated to its own detriment—outdated school food standards, mountains of food waste, disincentives for producing healthy food, all sorts of links in the food chain that could benefit from being “connected” and “smart”—and that change is unavoidable.

In Musk’s reply, he made an important distinction between harnessing all the innovation not just to produce mountains of food—something our industrial food system is very good at—but producing “real food” that is accessible to all people. “Sorry. Misquoted/mis-spoke. We’ve applied technology to ag for thousands of years. Modern technology is only now working on #realfood.”

Sorry. Misquoted/mis-spoke. We've applied technology to Ag for thousands of years. Modern technology is only now working on #realfood.

And because of this 140-character interaction, the Times piece by Kim Severson pointed out some of the difficult questions that we have to ask around technology entering the food chain. No one in this debate would call technology a panacea, a point Musk has made many times before. Even a cursory study of his own ventures shows that his approach works, quickly and widely, in areas where government and nonprofits have struggled and which the private sector has largely ignored. His Learning Gardens, outdoor classrooms operated by his Kitchen Community 501(c)3, operated in over 400 edible schoolyards in three major cities. No other organization, or the USDA, can say they have accomplished anything near that. The Kitchen restaurant group proves that healthy, plant-forward cuisine can be accessible to a wider range of palates and wallets without the need to preach from the farm-to-table bible; the group has even made investments in nearby rural economies that few, if any, restaurant chains have considered worth the challenge.

When you look at Musk’s food ventures against companies like Chipotle and Sweetgreen, which tout quick, fresh and inexpensive food but display little interest in ensuring its future production, it’s impossible to think Musk is as cynical as the line we quoted comes across. In fact, it reaffirms that he deserves the title of Founding Father in our modern, tech-forward food movement.