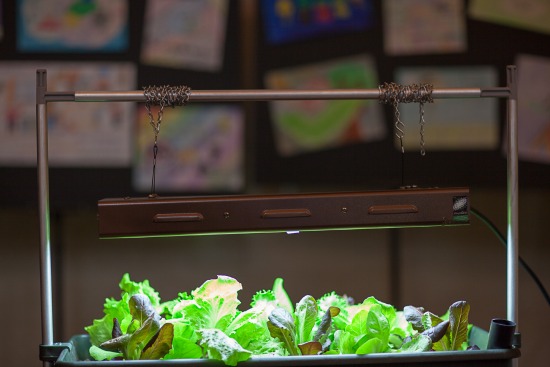 Perhaps no organization knows better than Earth Day New York what Tuesday is: It’s Earth Day, their namesake holiday, though the organization’s efforts — including getting gardens into New York City schools — are year-round.

Most New York City schools hardly have room for a playground, many turning to the rooftops for the space to play. But rooftop gardens are a whole different story; they’re expensive, they’re labor-intensive and they require significant infrastructure. But Earth Day New York finds a way to bring green into classrooms: working closely with coordinators from the New York City Department of Education’s Sustainability Initiative, they send their organic indoor learning gardens to classrooms of city kids of all ages.

“New York City has a couple of issues when it comes to gardens. There’s not a lot of space and then the climate — the best months for growing are when the kids aren’t even in school,” said the program’s managing director, John Oppermann. “But the container gardens skirt right around those issues.”

Put simply, it’s a garden in a box: you get a 30″ x 15″ x 11″ container, a bag of soil, a growing light and enough organic fertilizer to make the included quick-growing (and therefore highly satisfying to a room full of fourth-graders) lettuce seeds really take off. There’s also an accompanying curriculum that suggest ways that teachers can incorporate nutrition and sustainability into their preexisting lesson plans. The students are often the ones assigned to take care of the garden through to its harvest — a harvest which can be incorporated in the classroom’s snack time.

It quickly becomes a lot more than just a garden in a box: it becomes an active member of the classroom community. “You know how, when you go to a friend’s house for dinner and everyone greets the dog first because you realize he’s grown so much or he’s gained weight?” said Oppermann. “It’s the same thing with the lettuce! Every time someone walks into the room, they comment on the lettuce before they even ask how you are.”

And having the sprouting garden right there in the classroom really makes the students — many of whom get only as close to agriculture as a grocery store or farmers market will allow — think about where their food is coming from.

“These sorts of gardens are definitely an entry vehicle into sustainable food. Kids at this age, when you introduce them to ideas about sustainability, will take them and run with them,” Oppermann said. “Kids are so much better at this than adults are! …And they’re taking the ideas home, too — taking it to their families, talking about nutrition and sustainable food.”

Oppermann hopes that their organic indoor learning gardens program will continue to expand; he’d love to see “a critical mass of gardens in the schools — say, 10 to 15 gardens in a school at the same time. Maybe ten in classrooms and five in common areas: the cafeteria, the lunchroom, the lobby, so that everyone is involved even if it’s not in their classroom.” He has another project in the works, too: he’d like to connect schools with representatives who would speak and lead workshops about careers in sustainable food (and not just the beginning and the end of the process, he said. A lot has to happen after food leaves the farmer and before it arrives in the hands of the chef.)

New York Earth Day is celebrating its favorite holiday with a host of climate change-themed activities and vendors at Union Square on April 22 and at Grand Central Station April 23-April 24. Click here for a full list of activities and partnerships.