By Law, New York City’s Rooftops Are About to Get a Lot Greener

The city council just passed legislation that will require new buildings to include green roofs and/or solar panels—and that will likely impact urban agriculture, too. 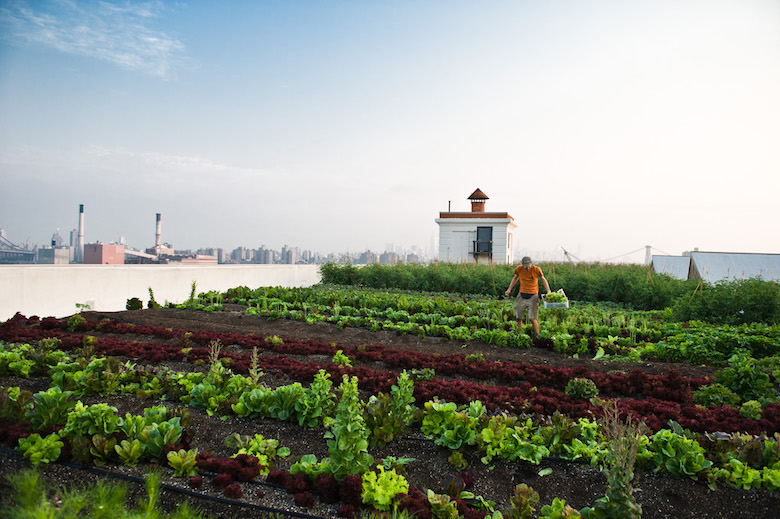 Green roofs can be simple grassy expanses, but thanks to businesses like Brooklyn Grange, they can also grow food. Photo credit: Valery Rizzo

On April 18, the New York City Council passed the Climate Mobilization Act, a historic piece of legislation that is widely regarded as an example of how local lawmakers can implement their own version of a Green New Deal at the city level, especially since Mayor de Blasio is set to sign it into law as part of his own massive blueprint for reducing the city’s carbon footprint by 2050.

The law bundled together a variety of initiatives and resolutions, like caps on emissions from certain buildings and requirements that certain buildings install energy-saving features like new windows and heating systems.

It also included initiatives that, when signed into law, will require that rooftops on new buildings and those that go through extensive renovation on old buildings be covered in green roof infrastructure, solar panels or a combination of the two.

WE DID IT! Green & solar roofs are now required on New York City buildings. This means cleaner air, water, a cooler city and a much more livable city. I can’t wait for the day we and the planet can reap the benefits. Thanks to everyone, who has been part of the push from day 1 : @mon_menagerie, @brooklyngrange, @newtowncreek and many more. #sustainability #greenroof . . . #brooklyn #nyc #eny #cypresshills #bushwick #williamsburg #bedstuy #greenpoint #redhook #sunsetpark #fortgreene #clintonhill #boerumhill #carrollgardens #coneyisland #parkslope #prospectheights #brownsville #canarsie #brightonbeach #bayridge #dumbo #dykerheights #brooklynheights

That effort was three years in the making, said Brooklyn city councilmember Rafael L. Espinal, who was at the forefront of the efforts and said his hope is “that someday you’ll be able to look out the window and see the majority of the buildings covered in green … and that that green will fight climate change.”

While green roofs vary in design, they generally involve a variety of plants in a growing medium (like soil) and a drainage system. In addition to making the city more livable for residents, green roofs reduce urban heat island effect, which means they basically cool cities down, while also insulating the building for better energy efficiency. Green roofs can also improve air quality, decrease the amount of CO2 in the air and absorb and filter water for stormwater management.

Green roofs can be simple grassy expanses, but they can also be built to grow food. Brooklyn Grange, for example, operates three commercial farms in New York City that operate as massive green roofs and also installs green roofs for clients all over the city, only some of which include food. They’ve installed over an acre of green space for outside clients so far, said co-founder Anastasia Cole-Plakias, with several more acres set to be installed in the next 12 to 18 months.

Now that green roofs will become the norm and support is building against single use plastics, I am going to put extra focus towards urban farming and our community gardens! We made great strides by creating the city’s first Urban Ag resource website, but more needs to be done to protect & expand what we have. It will help get local nutritious food and programming into our communities, while protecting our planet! #earthday .🌎🌿 . . #brooklyn #nyc #eny #cypresshills #bushwick #williamsburg #bedstuy #greenpoint #redhook #sunsetpark #fortgreene #clintonhill #boerumhill #carrollgardens #coneyisland #parkslope #prospectheights #brownsville #canarsie #brightonbeach #bayridge #dumbo #dykerheights #brooklynheights

“We do feel like we’ve reached a real turning point in this arc in the city’s development where it’s critical to include green infrastructure in our plan in any new development or major refurbishments,” she said. Cole-Plakias and her colleagues advocated for the green roof legislation in meetings with Rep. Espinal, where they discussed the impact of green roof development in other cities.

So far, it’s unclear whether requiring green roofs will directly impact the number of urban farms and gardens in the coming years, but Cole-Plakias said, “we’ll be really excited to find out.”

And Rep. Espinal said that one of his goals with the legislation was to create “new opportunities for urban farming on our city’s rooftops.” Plus, now that the mandate for green roofs is finished, he’s committed to pushing on another one of his environmental efforts: comprehensive urban agriculture legislation. “I’m going to focus more of my time on protecting and expanding community gardens and urban agriculture,” he said.

In the meantime, as rooftops get greener (no matter what’s growing), they’ll create new spaces for pollinators, which will be good for all of the city’s farmers and gardeners.