What Standing in Front of the T.G.I.Fridays during OccupyTimesSquare Reminded us to Tell You About World Food Day and the Non Profit Food Democracy Now 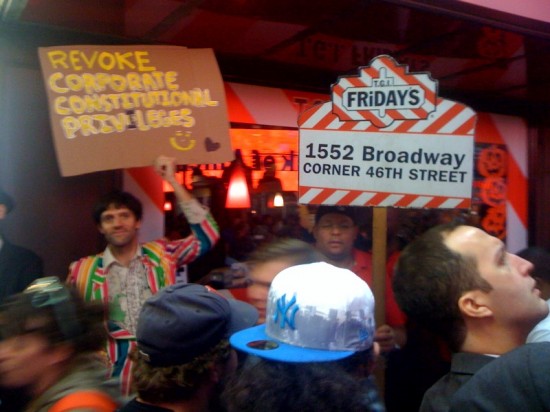 There were a multitude of messages at the edge of the showdown at Seventh Avenue and 46th Street at Occupy Times Square.

Just as at Occupy Wall Street, there were many diverse messages placed upon placards at Occupy Times Square last night, like the two shown above. (Though we wager T.G.I.Fridays didn’t expect their regular Saturday night signage to be among such anti-corporate company.) As one protester’s piece of cardboard read: “There is no common message, because so many things are broken.”

One of those messages is from Food Democracy Now, a group  that believes one of the things that needs to be fixed is our food system. To quote the the nonprofit: “Occupy Wall Street was born out of a legitimate frustration with the collusion between Big Business and elected officials of the U.S. government, leaving the will and greater good of the 99% out in the cold. And nowhere is that collusion so great as in food and agricultural production.” (Read the rest of what they say here.)

Tomorrow, as part of both the global anti-hunger movement called World Food Day and Occupy Wall Street, the group is helping promote the “Right2Know” march, which ends in Washington D.C. after a two-week stroll south starting in NYC. The end-goal there is to work toward more transparency in the way our food is raised, distributed and processed, if not a complete overhaul of the whole industry. They’re urging others who want to see change to take part in other Occupy events here and around the country tomorrow. Just remember to hold your sign proudly, just like these two (protesters?) above.