In addition to learning why he thinks attending our upcoming Edible Institute is important, we reached out to Tom to discuss what he’s pursuing outside of his publicized work and find out his favorite New York City haunts. 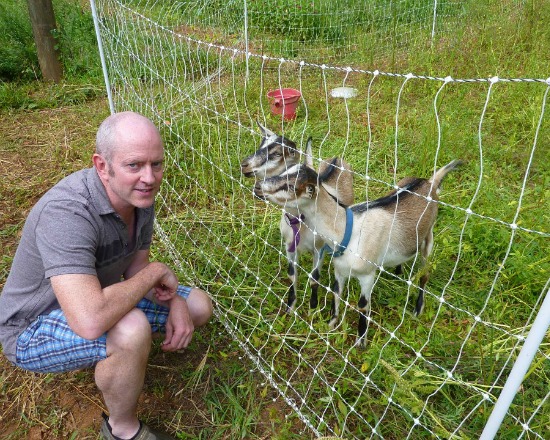 The countdown to Edible Institute continues this week with a recent conversation with writer, farmer and former Brooklynite Tom Philpott. A self-proclaimed Edible fan, Tom will be joining Brian Halweil and Anna Lappé to share a closing summary of his impressions from our jam-packed weekend.

In addition to learning why he thinks attending our upcoming Institute is important, we reached out to Tom to discuss what he’s pursuing outside of his publicized work and find out his favorite New York City haunts:

Edible Manhattan: Why are you joining us at Edible Institute?
Tom Philpott: It’s a great network of publications and publishers, and I’m excited for the opportunity. I spoke at one of the early Edible Institutes, in 2010 in New Mexico, and it was an incredible gathering of people: some of the most dynamic writers in the food movement, people who are on the ground involved in amazing projects all over the country. When Bruce [Cole] and Brian [Halweil] asked me to come back and showed me the lineup of speaker and panels, I couldn’t resist.

EM: What speaker or session of the Edible Institute lineup looks particularly interesting to you?
TP: I’m excited about Anna Lappé, and I’ve been reading Brian’s stuff for years, since his days at the Worldwatch Institute. I’m also a big Mark Bittman fan. One thing Bittman does is to really demystify cooking. I remember when I first really got interested in cooking in the ’90s, there was an idea that you needed all of this fancy equipment and needed to spend hours in the kitchen and make a mountain of dishes with each meal — which would appeal to a very small number of people and in fact made cooking look like a spectator sport, something to be watched on TV. It was something that you couldn’t do unless you had access to fancy ingredients, equipment and knew elaborate techniques. Bittman really challenged that with his minimalist style (I’m thinking specifically about a piece that he did about outfitting a $300 kitchen) and emphasis on basic skills. It’s been exciting to see him turn to food politics, his forum on the New York Times op-ed page, given his star power as a cook. Paul Greenberg is also an amazing writer. Wenonah Hauter is not really well known outside of policy circles, but she is an important thinker — one of our two or three greatest authorities on the corporate takeover of food. I’m interested to hear her speak on the connection between food and fracking. Claire Cummings is great — author of an important book on GMOs. In short, lots and lots of great people. And I know that the food is going to be amazing…

EM: What topic or conversation stands out to you as powerful?
TP: Definitely the issue of fracking. How it’s structured is interesting. New York State has been able to fight off fracking thanks to a social movement; not stop it forever necessarily, but at least put it off. Meanwhile, all over the country, fracking is happening on a huge scale. I have met people in New York who are shocked that fracking is happening in other parts of the country. I know that Hauter is going to help start the discussion on a national level. I also think there is plenty that the country can learn from New York — and that New York can learn about places like Texas and North Dakota, where fracking is happening full tilt. I also loom forward to Jane Black’s panel on whether or not the food movement can cross geographical, cultural and class boundaries — a vital topic. I have an interest in Sam Fromartz’s talk on independent food journalism. Sam is the lead editor of a project called the Food and Environment Reporting Network.

EM: Tell us about a personal food-related project you’re working on — outside of your publicized work.
TP: I’m very proud of the project I helped launch back in 2004 outside of the Appalachian mountain town of Boone, North Carolina, Maverick Farms, and the way it has evolved over the past ten years. Our goal from the beginning was to help reshape the community food system, make it more fair — there’s a lot of inequality there, a small number of wealthy people, mostly with second homes, a decent-sized middle class, anchored by Appalachian State University and a lot of low-income people barely scraping by. We wanted to go beyond supplying food to people who already had lots of choices.

We launched a CSA in 2005 that over the years has evolved ino a multi-farm project, aggregating energy from lots of different directions in the community to help build an alternative market that works for both small-scale organic farmers (who don’t make much of a profit, even when charging top dollar) and people with limited incomes. We started the multi-farm High Country CSA and somehow it has worked, despite the challenging logistics. It was the first rural multi-farm CSA to get FDA approval to accept EBT and SNAP benefits. Now in its fifth year, it is a federally recognized food hub, and almost a third of the more than 100 members get subsidized shares. We faced some really complex and challenging issues; we’ve worked especially with the local health department and anti-poverty/community empowerment organizations to make it as effective as possible. We also started a teaching/incubator farm on public-access land for new and landless farmers. Altogether, I think it’s a model of how communities and farmers can work together to aggregate their supply to create a system that works for everyone. Wealth in the community should be a positive force; in this case, the HC-CSA aims to create links across economic disparity to stabilize the local food system and make it broadly accessible.

EM: Where is the “food movement” headed?
TP: I think that one thing that we’ve learned in the food movement in the past 10 years is that the political system resists reform. Stuff like the farm bill — a lot of activism has been directed at the farm bill, and the payoff, I hate to say, has been pretty minimal. The message is that the food industry takes a large part of their profits and dedicates them to lobbying. I think that we’ve learned that we’re up against a powerful foe. I think that the most important thing is to build out alternative food networks and hubs — basically farmers and community members getting together and building institutions that work for them. It’s happening all across the country. The food movement has three main challenges, in my view: 1) figuring out how to move DC policy in a bought-and-paid-for political environment; 2) building alternative food systems and 3) creating a critique of the food system that doesn’t involve alienating people without a lot of  money — in fact, drawing in and addressing the concerns of low-income people is probably the main challenge. How do we tell people that they’re not paying enough for their food, when real wages have stagnated for 30 years and inequality is surging? How do we make the case that the kind of food that we’re talking about is worth the trouble, when many people are working crazy hours? If we don’t meet this challenge head on, we risk building a niche alternative food system that’s available in certain bubbles. That’s not enough. Industrial food production is incredibly environmentally and socially destructive — it’s contributing mightily to climate change and while also making us more vulnerable to it. A niche alternative food system that doesn’t really challenge the dominant model will only reinforce its power.

EM: Tell us a few of your favorite places to go in New York.
TP: I lived in Brooklyn for five years — Prospect Heights and Crown Heights — and like Henry Miller, I’m a Brooklyn patriot, hipster clichés aside. I miss my old community garden (Hollenback Garden on Washington Avenue), the Park Slope Food Co-op (it can be a pain in the ass, but I love it), the Grand Army Plaza Greenmarket, Prospect Park, Al di La on Fifth Ave… When I go back, I like to check out the smaller restaurants that aren’t super expensive, but are still doing innovative cooking with great ingredients. In recent visits I’ve had great meals at Saltie and Roberta’s in north Brooklyn, and in the East Village, Terroir, Northern Spy, and Peter Hoffman’s place, Back Forty. I’m also looking forward to checking out the new Gotham West Market — I like it when a bunch of talented cooks get together and launch a bunch of food enterprises under one roof.