Eating with Clio: Memories of a Kid-Friendly Meal at Prune 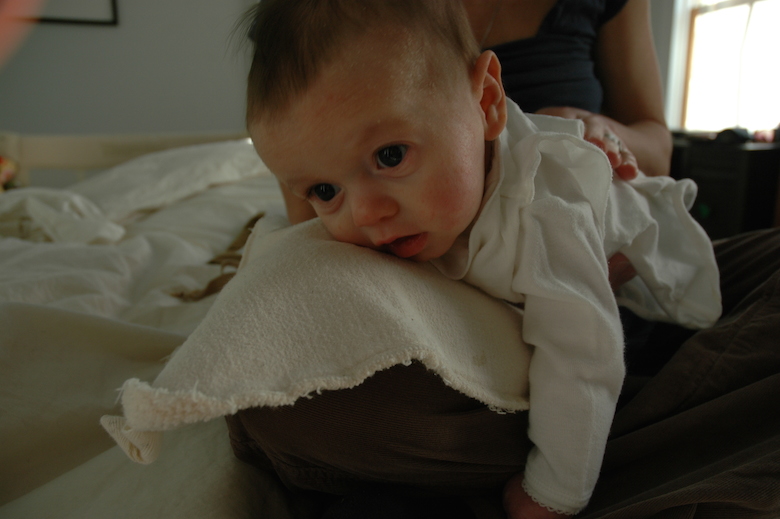 I just finished Blood, Bones and Butter–the roman-a-clef from Gabrielle Hamilton that’s drawn endless praise from Batali, Bourdain and everyone in between–and I’m feeling very nostalgic.  Nostalgic for Hamilton’s rural bohemian childhood in the Delaware Water Gap. For my own adolescence in Manhattan. For Midnight Cowboy and the movie’s cheap coffee meals in Hells Kitchen–yes, I’m mixing many time periods, I know.

“I still very much like that smell of manure,” Hamilton writes in the sort of curt honesty that defines the book. “I like it in my food and my wine and even in certain body odor.” Hamilton learned about egg-on-a-roll sandwiches from the “astonishingly underdressed hookers who worked the tunnel.” (The sandwiches cost 90 cents with cheddar and bacon, and Hamilton generally paid with a stack of dimes.) She communed with budget-conscious West Indian women when they both flocked to the bin of “rotten and bruised fruit” from a Hells Kitchen stand, sold for 19 cents a pound. She made pasta sauce from ketchup packets stolen from McDonald’s and made the round of Village Voice-advertised bars that served free hors d’oeuvres during happy hour.

Here and there is advice about raising kids and eating with kids. “Debbie grew her own tomatoes and zucchini in her garden at home but was no foe of processed foods,” Hamilton writes about a friend. “I loved that she gave her kids homegrown vegetables and big glasses of sugary processed Kool-Aid right alongside. That is my favorite type of integrated person. Some of each thing and not too much of any one.”

And she proves herself a master of olfactory cues, like when she writes about being raised by her home-cooking mother: “I sat in her aproned lap every night after dinner and felt the treble of her voice down my spine while breathing in her exhale of wine, vinaigrette, and tangerine.” And also a master of food-based analogies for non-food things: “We met Gunther, the lion tamer, and marvelled at his blond hair, deep tan, and amazing ass–high, round, and firm like two Easter hams–in electric blue tights.” Or here: “The lambs roasted slowly, the blood dripping onto the coals with a hypnotic hiss.” And we learn she had an early fondness for the life of a butcher: “I wanted to follow Joe in there. I wanted to be with the meat and the knives, and to wear the long bloody coat.”

The book is painfully raw at times, especially when Hamilton talks about her rocky family history. “By the time my parents might have realized–a glance in the rearview mirror–that they’d abandoned us, we were not to be recovered.” Or, consider the ending of the excerpt in the New Yorker: “Then the sun started to set and we lit the paper-bag luminarias, and the lambs were crisp-skinned and sticky, and the root beer was frigid, and it caught, like an emotion, in the back of my throat.”

The book also makes me think of one of the first times we took Clio out to a restaurant. She was just a couple of months old–eons before we got into any of our previously chronicled food worrying. She was still napping twice a day, and had a reliable bedtime of 7 p.m. Our plan was to arrive early, when we assumed we’d have good luck getting a table for two, and be done by 7ish, just as Clio was starting to nod off.

(Note: There is an age-related window of opportunity for taking infants to a restaurant. Assuming they are good nappers and don’t cry too much, it can be very easy until age 6-months or so. From 6 months to a year, dining with child requires more vigilance as they grab for silverware, water glasses, cocktail glasses and more. And then once kids get mobile–walking by one, talking by two–eating out can be more work than it’s worth. One strict friend told me she stopped taking her child to restaurants between age 1, and only resumed at age 3 when the child was willing to sit at the table for at least an hour or so.)

Our plan at Prune didn’t exactly work out. We hit insane traffic on the LIE and then got stuck on the 59th St. Bridge during a movie shoot (why, for God’s sake, weren’t we tuned to 1010 WINS?), as Clio wailed in her dirty diaper and Sarah and I tried to keep sane. By the time we arrived at the restaurant, it was 7ish and there was a crowd. I had eaten at Prune weeks before with Almaz Zelleke, then head of the New School Food Studies program (and now a dean at the school). I liked the food so much that I wanted to bring my wife as part of a night in the city, albeit with an infant in tow.

The staff accommodated us, and the bartender entertained Clio, who knocked over at least one glass of ice water as we sipped much-needed cocktails.

And in what seemed like no time, they had squeezed us into perhaps the most secluded 2-top in the joint, tucked into a wall recess between the bar and front door. It was the perfect cozy nook amidst the din. And with my pinkie in her mouth as pacifier, Clio went to sleep on my lap and stayed asleep for the entirely of a multicourse meal that left us having a 2nd drink, savoring every morsel of dessert and smiling in an utterly calm moment of new baby bliss. It was an evening that–like the life Hamilton portrays in Blood, Bones and Butter–had its challenging swings, but was saved by food in the end.