The Craft of Restoring Copper Pots

You can find this acclaimed tinner’s pots in kitchens around the city, including Eleven Madison Park. We paid a visit to his Rhode Island shop. 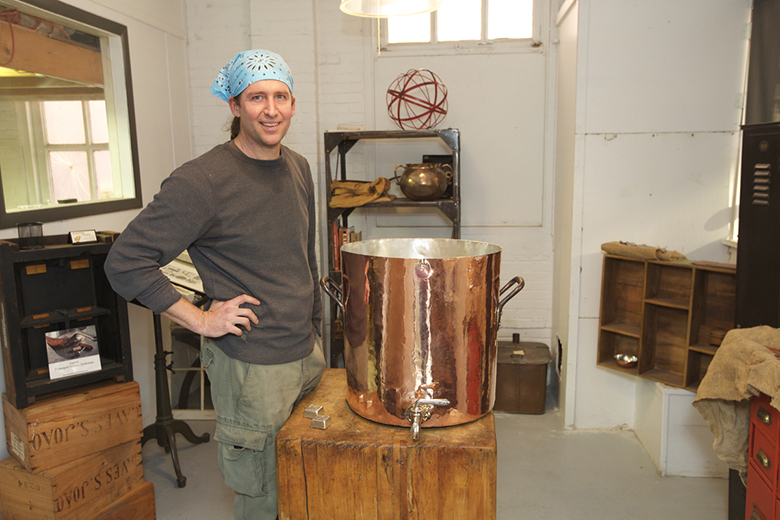 Jim Hamann of East Coast Tinning and Duparquet Copper Cookware stands by a recently restored stockpot whose provenance goes back to the Knickerbocker Club, an NYC gentlemen’s club and one-time haunt of Morgans, Roosevelts and Rockefellers.

“I love this pot. But if I cannot use this pot, I do not want this pot,” Linda Troia said to her boyfriend, Jim Hamann, after having spotted the battered copper stockpot way high up on a shelf in a sleepy town in Burgundy, France. “Can you fix this pot?” Hamann brought out his rusty French to confer with the antique shop owner; a short time later he turned to Troia to say, “I can fix this pot.” And the seeds of an enterprise were sown. Today, the restored copper wares from East Coast Tinning have found their way into kitchens worldwide, from Eleven Madison Park to those of many a discriminating cook and chef.

But first came much research, sweat and toil. Back stateside from the fateful trip, Hamann (a mechanical engineer by training) busily set about fulfilling his promise in his backyard in Rhode Island with the stockpot, a giant lobster cooker, a tin ingot, flux and a cloth in tow. It took eight tries before he could meet the standards of his loving if exacting partner: “I would cook in that pot,” Troia said at last. He soon began to offer his restoring services on eBay for collectors of heirloom copper ware. Word of mouth took over and soon his business took off.

By and by, after restoring countless pots of yore and many moments of “They just don’t make ’em like they used to,” Jim decided to extend his resurrecting activities to the art of traditional pot-making as well and, in 2008, formed Duparquet Copper Cookware. The name is an homage to a mid-19th-century brand that, like its contemporaries, featured thick copper bodies, lush tin-lined interiors, cast-iron handles and hefty rivets. And like its namesake, the modern Duparquet carries on this practice, manufacturing “heirloom-quality copper cookware,” from sauté, fry and sauce pans to bowls and even copper-inlaid knives.

Both operations have received glowing praise and have been finalists for Martha Stewart American Made awards in exceptional design.

While keeping select trade secrets to himself, Jim walked us through his alchemical process of turning worn antique cookware to gleaming copper and tin brilliance. 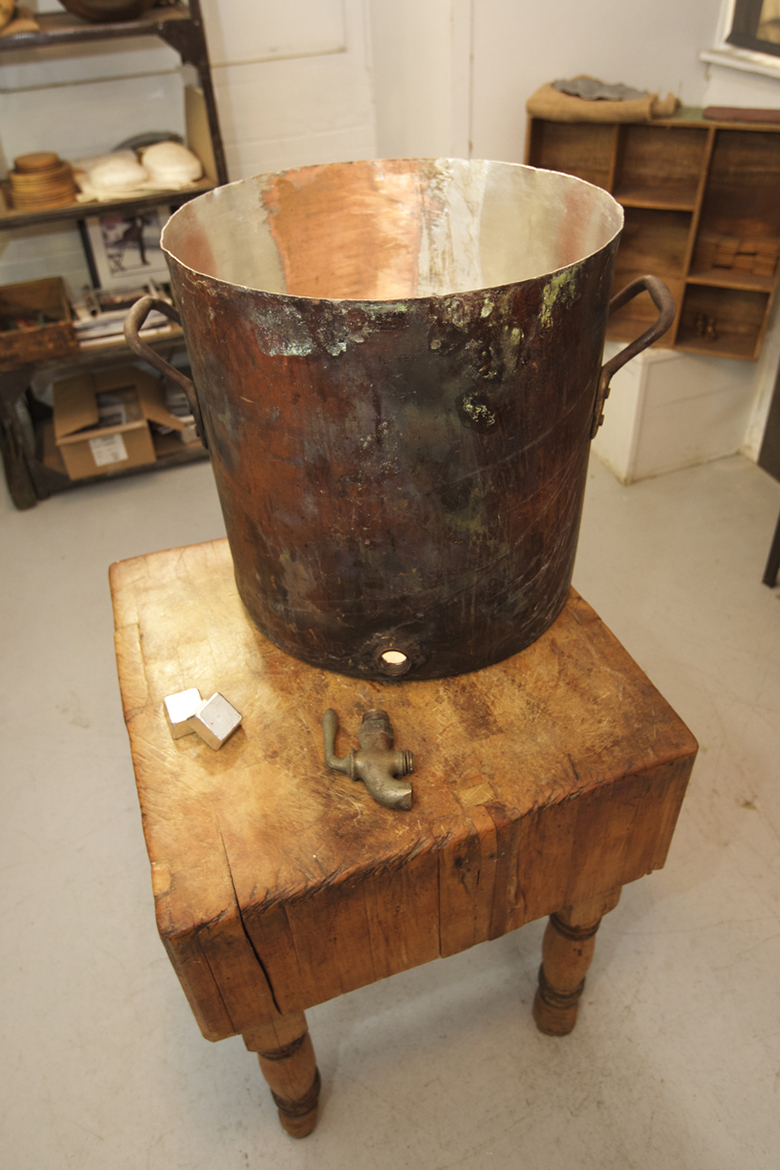 Upon our arrival, we’re greeted at the studio door by a giant (20- by 20-inch) stockpot that saw use in the kitchens of New York’s old-timey Knickerbocker Club. It’s the largest single piece Hamann’s ever worked on. He’s prepped it for our arrival so that just a final interior section needs to be tinned. Note the tin ingots at left that will soon be put to this use; also note the spigot that suggests the pot was once used for consommé.

Here, some details from the giant stockpot show some of what Hamann’s up against while restoring: 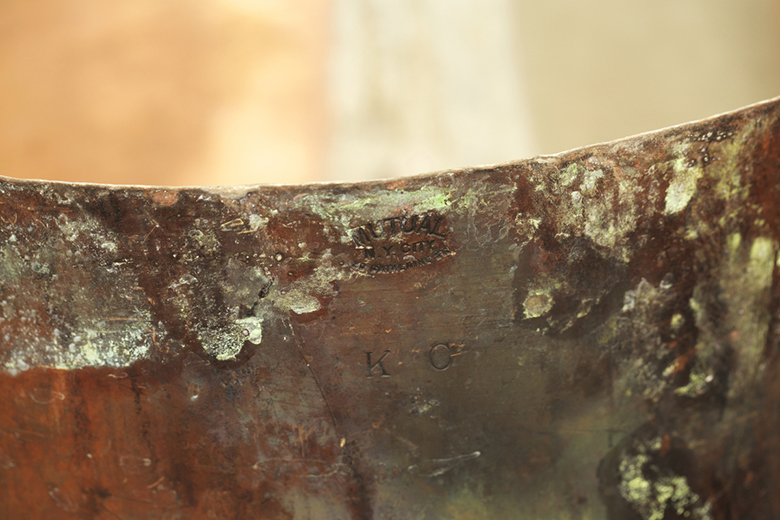 Branding “mark” or “stamp” lies barely visible beneath corrosion, where a faint “K.C.” for Knickerbocker Club can be seen. 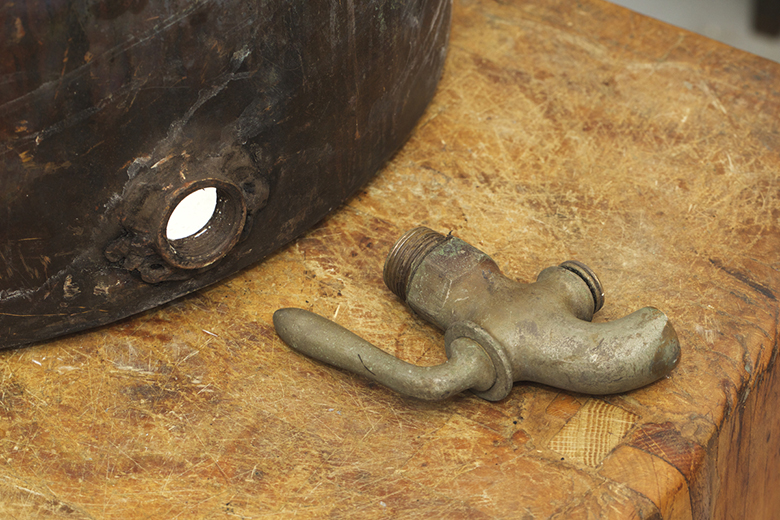 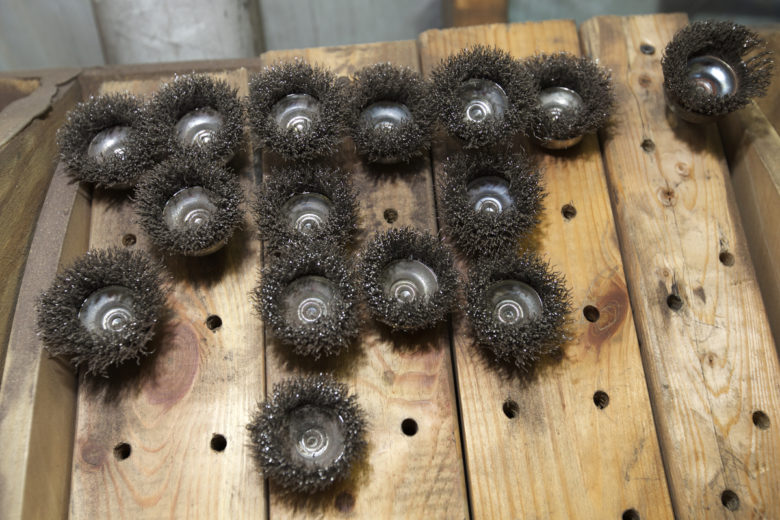 Burnt oils and other substances must be removed from interior surface in order for new tin surface to adhere. A wire wheel attached to a drill is used to return metals to their original luster. 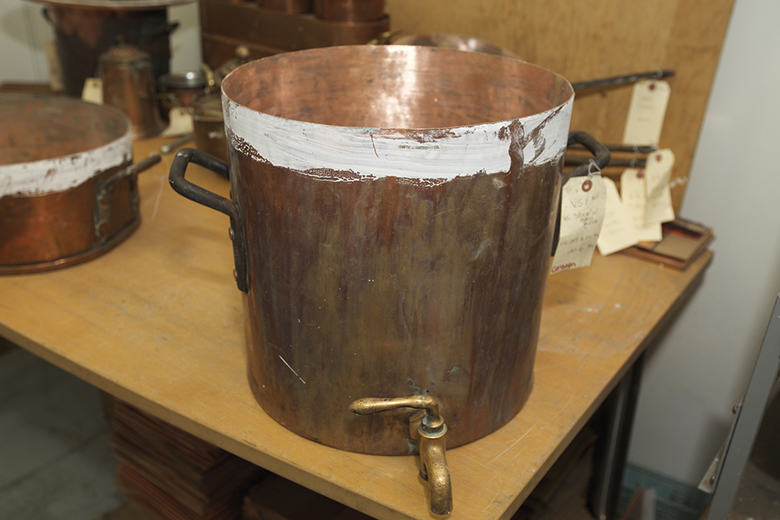 A paste of marble dust called “whiting” protects the pot’s outside from splatter while the inside is tinned. 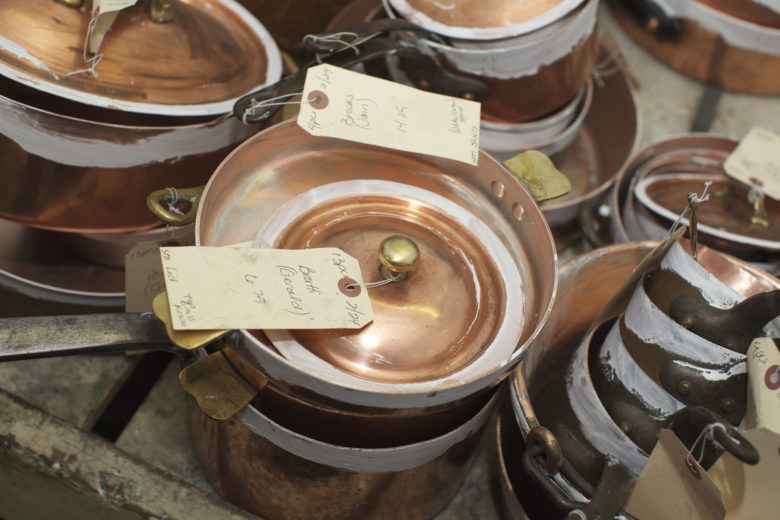 The giant stockpot’s not the only game in town; pots and pans of various sizes, ages and origins await their re-tinning. 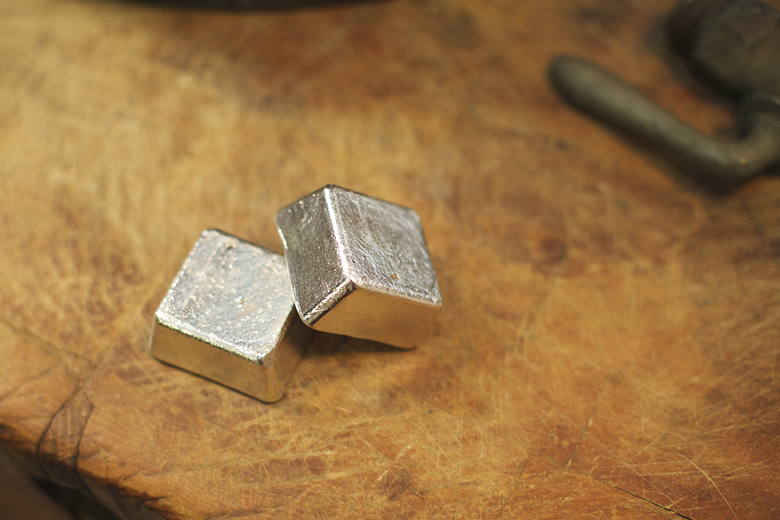 While an excellent conductor of heat, copper oxidizes if it’s not plated. Tin ingots melted will plate the copper interior surface. 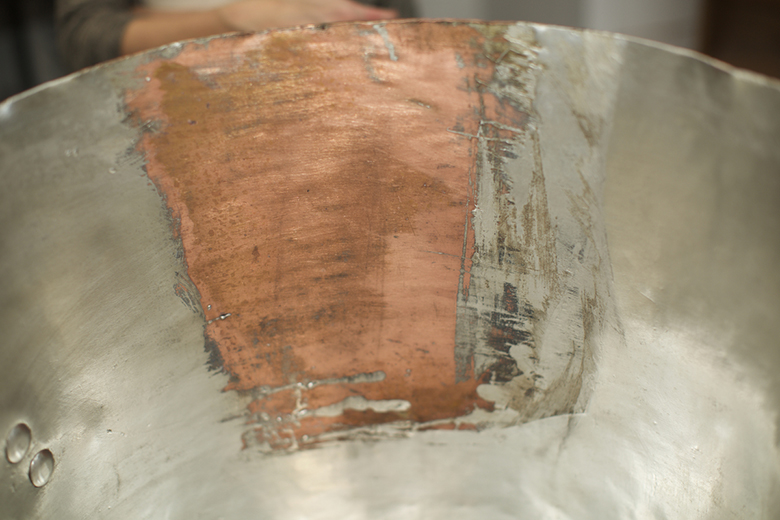 Due to the great size of the stockpot, Hamann tins the interior in sections; here, the remaining area to be patched. 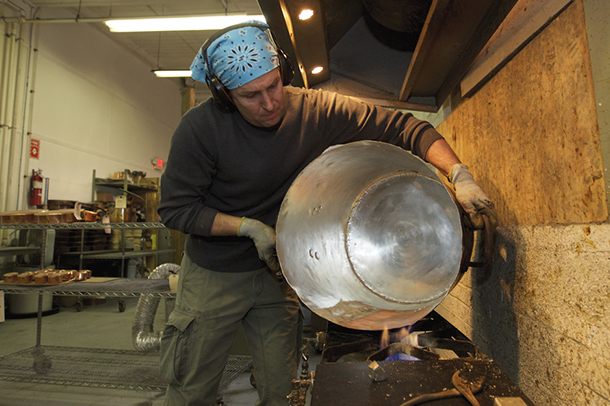 Placing the stockpot directly on low heat, Hamann is careful not to run off already tinned surface. 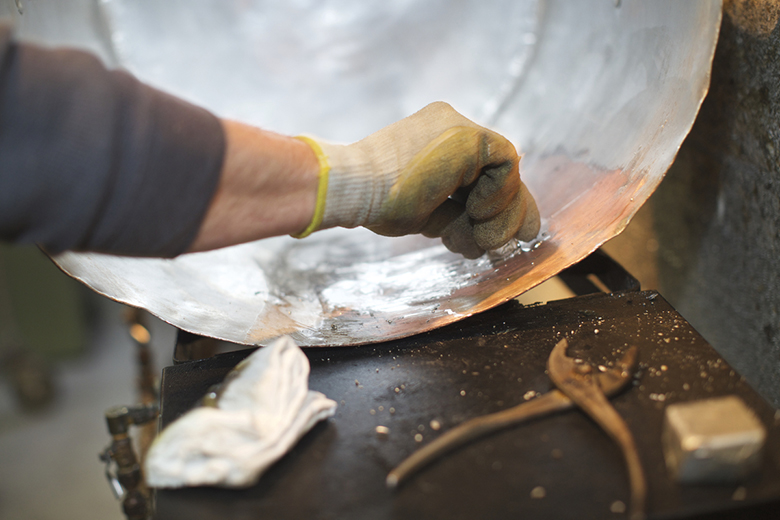 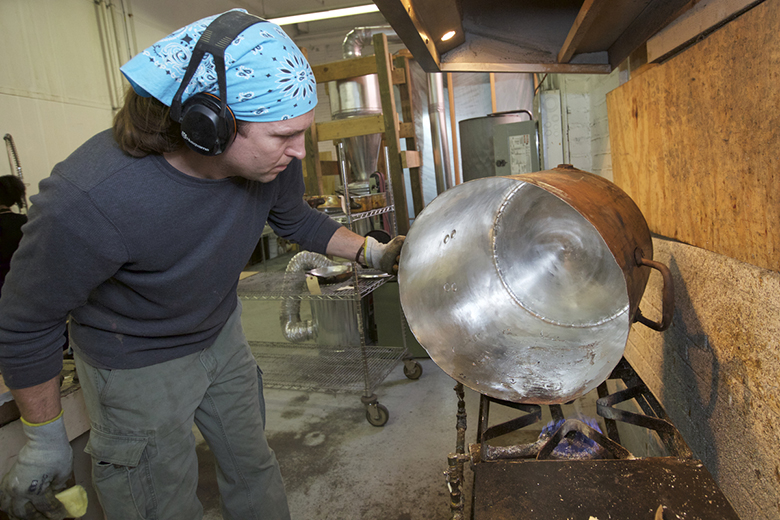 Too thick a surface looks gloppy and unrefined, too thin means re-tinning again too soon. 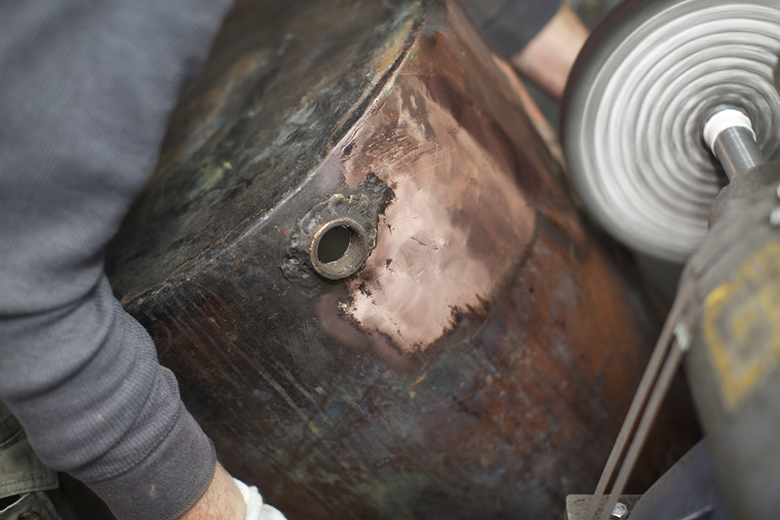 With interior now tinned, an industrial buffer does the exterior cosmetic work. 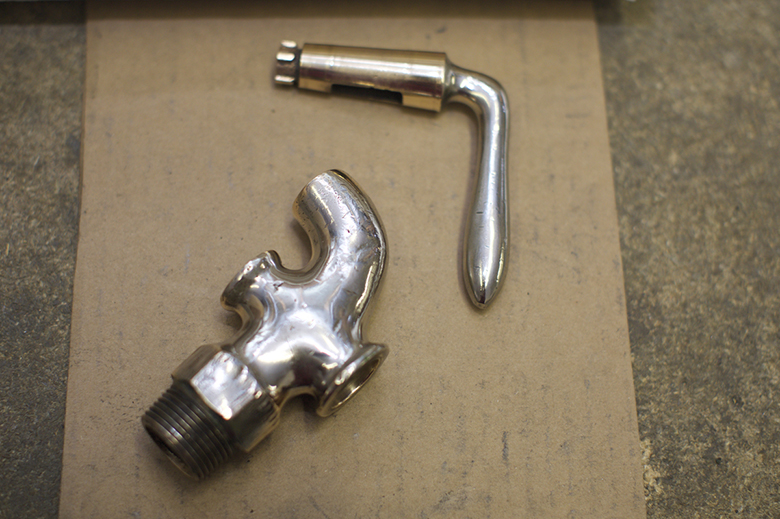 The mighty buffer also has its way with the spigot. 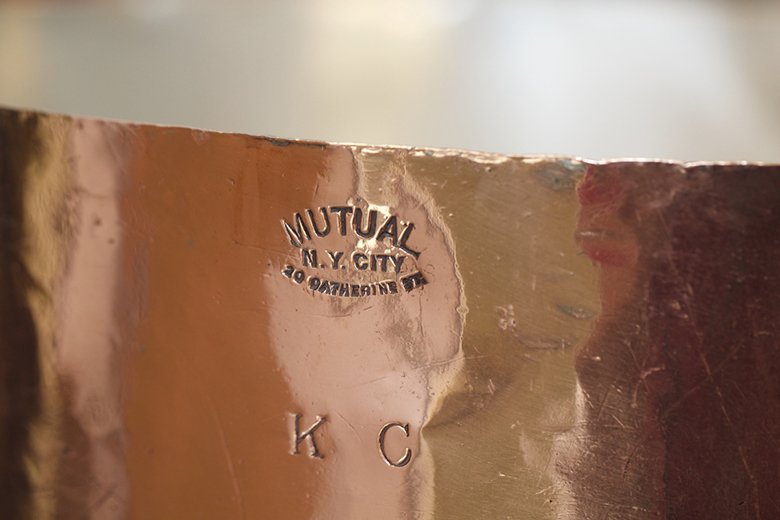 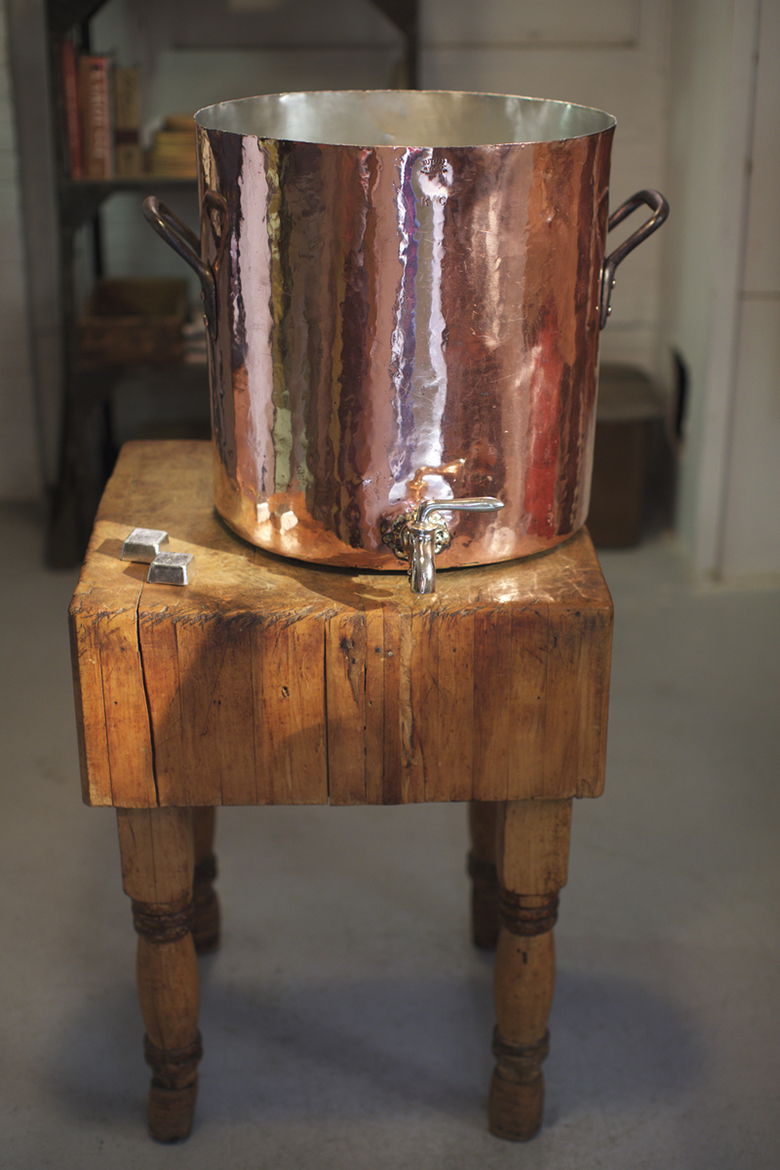 The restored final piece is a stunning revival of a long ago era. 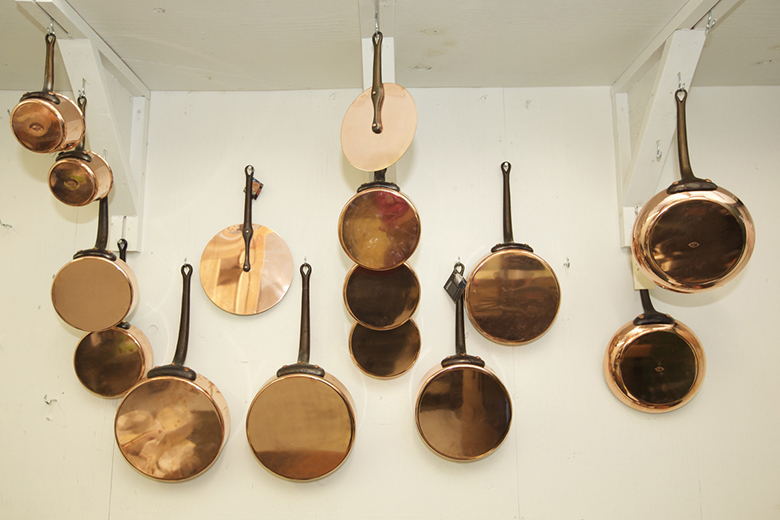