Tri-Star: The September Strawberry That’s Worth the Wait 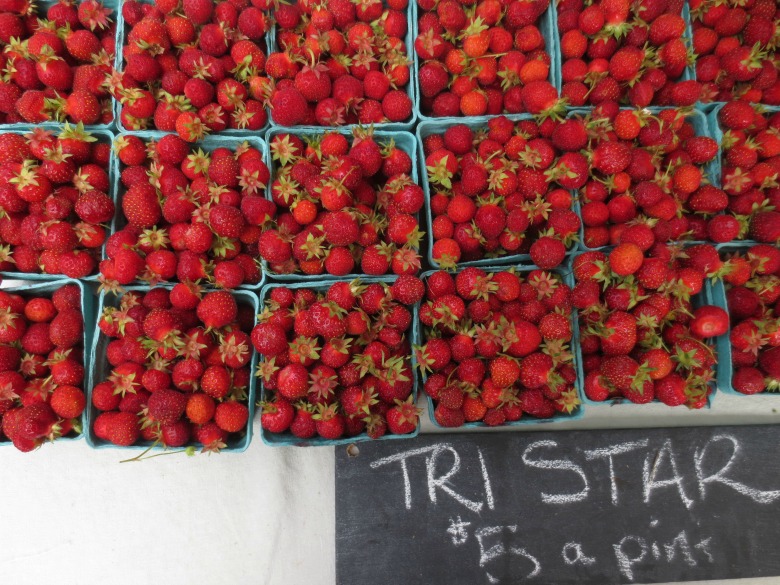 The opposite of tasteless supermarket behemoths, tri-stars are all wrong for industrial agriculture. They’re also indescribably delicious.

Corn and tomatoes are taking a bow, but as cauliflower and cabbage rush the stage, one summery ingredient is still stealing the Greemarket show: strawberries.

These aren’t the big berries you bought in June and baked with rhubarb. In September, upstate farmers who tend a smaller, later-bearing variety called “ Tri-Stars” are finally bringing the rare, prized harvest to market, and chefs know, they’ve saved the best for last.

Dessert menus at the likes of Per Se, Hearth, Jean Georges, Blue Hill, Babbo, Momofuku and Telepan proudly serve tri-stars each September, which they vie over at the market stands of aptly-named farms like Mountain Sweet Berry, Fantasy Fruit and Berried Treasures.

Crossed with a mountain strawberry and retaining all 51 aromatic compounds of the wild kind, Tri-Stars were developed by two Cornell PhDs. As Nancy Matsumoto explained in our profile of Greenmarket’s Rick Bishop, that farmer gave Manhattan its first taste almost thirty years ago:

In 1985, Bishop took Union Square by storm, selling the then-unknown Tri-Star. These strawberries are tiny and delicate — the opposite of tasteless supermarket behemoths, and all wrong for industrial production. They are, in other words, indescribably delicious. In an era when Union Square was better known as a place to score illicit substances, the Tri-Star was another type of mood-enhancing product, one that lured a different class of clientele: chefs.

This was during what Bishop calls the “French revolution,” when “Daniel [Boulud] and Jean-Georges [Vongerichten] were coming to town.” The Gallic advance guard flipped for the berries, which conjured up the fraises des bois of their homeland. Suddenly, Bishop’s answering machine was filled with French accents, he recalls, channeling their voices: “‘This is Didier,’ ‘this is Pierre,’ ‘this is Thierry,’ all ordering flats of Tri-Stars.

The Tri-Star is a simple example of Bishop’s one-two approach: search the world for extraordinary seeds and grow them in the richest soil you can create. Today the tiny berry still draws huge crowds when they’re harvested in late August and September — including the likes of Mario Batali, Andrew Carmelini, Christina Tosi, Kurt Gutenbrunner and Marco Canora.