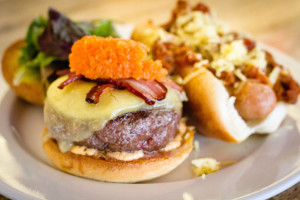 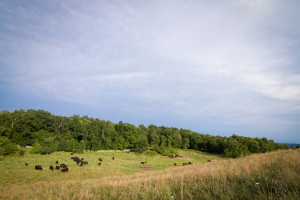 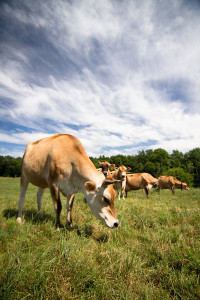 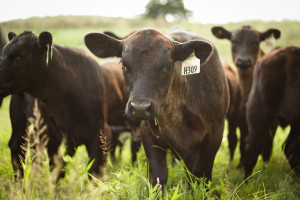 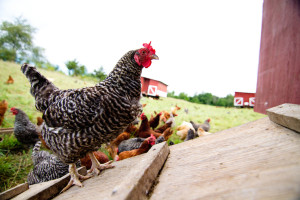 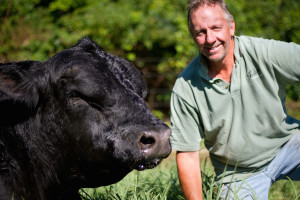 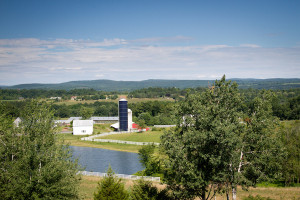 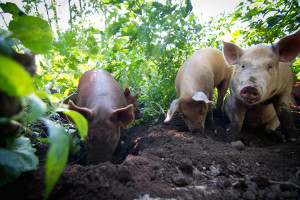 Last Friday I found myself shivering in a snow-blanketed Hudson Valley as I stared down the snout of a 500-pound boar and thought about how I had almost certainly eaten one of his daughters for lunch. Also on that lunch menu: the endearingly fluffy chickens scratching around in the slush beside the egg mobiles and the brown-eyed cows standing contentedly in the field. I had just eaten at Grazin’, the Hudson diner owned and operated by the family behind Grazin’ Angus Acres, and it was time to walk off a tiny fraction of my pulled pork-topped beef burger on a rather frigid farm tour. After a bus ride back to the city, we’d finish the day with dinner at another Grazin’ restaurant, this one an outpost in Tribeca that opened this week.

Grazin’ Angus Acres, owned by Dan and Susan Gibson, has been a fixture at the Greenmarkets for several years. Their beef is beloved by chefs and customers alike (and Chelsea Clinton, apparently — she ordered their short ribs for her wedding), and they regularly sell out of their $10/dozen eggs. Their Hudson burger joint, opened in 2011, has developed a loyal following that includes pregnant vegans (they reverted to an all-plant diet after the baby was born) and weekday vegetarians. The main reason for their success with meat-skittish clientele? Theirs was the first farm in the Greenmarket system to receive certification from Animal Welfare Approved (AWA), a not-for-profit organization that audits farms to ensure that livestock is protected by a rigorous set of standards.

In keeping with their commitment to AWA, both Grazin’ locations source meat and dairy exclusively from AWA-certified farms. This includes everything from the cheddar in the deep-fried mac ’n cheese to the rennet (extracted from calf stomach) in the organic ice cream (try it in a birch beer float). AWA oversees every aspect of an animal’s life from birth up to and including slaughter and they reinforce their standards with yearly audits of every participating farm. Before you dismiss their certification as yet another cost-prohibitive way to help farmers with capital get ahead, consider this: AWA’s audits and certification are free for farmers. Dan Gibson swears that the additional costs he incurred in the certification process were minimal; auditors determined that his egg mobiles could hold fewer chickens than he originally planned, so he had to downsize (I imagine Greenmarket customers were delighted to see a few extra broilers at market that week).

Grazin’s menu reflects the AWA philosophy beyond simple sourcing practices. Chicken soup is made with retired egg layers, and Grazin’ co-owner Chip Chiappinelli (also Gibson’s son-in-law and drinking buddy) waxed poetic about ground beef made from retired dairy cows, proclaiming it in-your-face flavorful. The diner recently had to do without blue cheese for a month because only one local blue cheese producer has the proper certification, and last Friday they lamented the loss of an early greens planting. Their commitment to sourcing locally extends beyond meat and dairy: all their potatoes are grown within seven miles of the diner and a tri-fold in the middle of each table proudly advertises farm partnerships rather than dessert specials.

The Gibsons have ambitions far beyond New York City for Grazin’. Their plan is to adapt the model to new cities while continuing to require AWA certification and place a heavy emphasis on local sourcing. The restaurants will be competing with crowd favorites like Shake Shack for the sustainability-minded burger eaters of the world, but here’s hoping their immaculate ground beef and high quality ingredients speak for themselves. With an AWA seal of approval prominently displayed on their TriBeCa marquee, the restaurant is already increasing visibility for the organization. If they’re successful in opening across the nation they’ll be creating a market for AWA-certified farms and supporting best practices in livestock production.