Red Rooster Harlem Hosts a “Conversation in Art and Food” 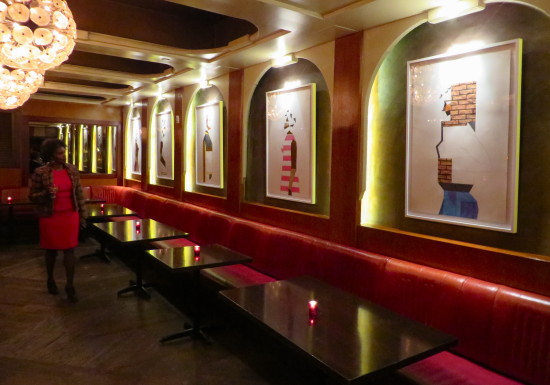 Derrick Adams’s artwork is the first formal installation to line the walls in Ginny’s Supper Club.

Much of the stress of planning an event comes from pulling a menu together, but when Marcus Samuelsson was organizing his dinner in celebration for a new art installation in his Harlem restaurant, the focus was spent on deconstructing the dishes. Last Wednesday, Red Rooster Harlem launched their first salon-styled evening in the underground lounge, Ginny’s Supper Club. The event was dedicated to a collection of six pieces by local artist Derrick Adams.

The four-course evening was billed as “a conversation in art and food” and it started as just that. Mr Samuelsson was unexpectantly called out of the country on a family matter the day before the event, so Thelma Golden, the curator at Harlem’s Studio Museum, stepped in to moderate the discussion with Mr. Adams. He started by explaining that, much like a chef debating what ingredients to put into a dish, he approaches his subjects in both an itemized and a collective way, saying “things are separate and very much together in the way you take them.”

“Great recipes — like this meal — you don’t have to know what’s in it. You just have to like how it tastes,” he said. 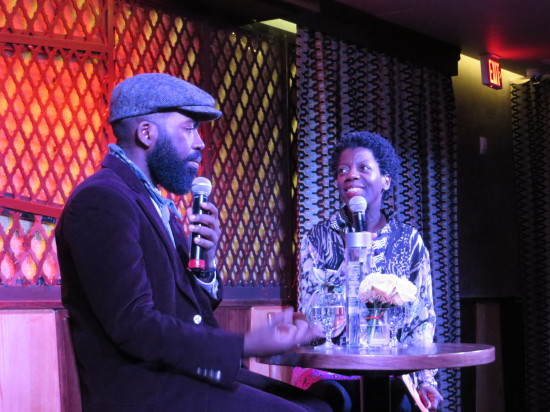 Head chef Marcus Samuelsson was unable to attend at the last minute due to a family emergency, so Thelma Golden, the curator at Harlem’s Studio Museum stepped in to moderate the discussion with Adams.

Mr. Adams’s mixed-media compositions showed human forms using allusions to urban figures like a subway sign, a yellow brick road or a crosswalk. The six pieces are now on display in Ginny’s, but as part of the celebration the Red Rooster team took a shot at breaking down their own culinary works of art.

“All of the dishes were inspired trying to go from his work, using the deconstruction of structures, and we went with that,” kitchen director Joel Harrington told the crowd of more than 70 attendees, which included artist Laurie Simmons.

Taking his initial cues from the brick drawn in one of Mr. Adams’s pieces, the first dish was based around a corn bread “slab” topped with a poached quail egg, spinach puree and a hollandaise powder. Arguably the best dish of the night was the Manhattan chowder, as part of which the kitchen was able to incorporate the Southern flavors that they are so well known for into a completely reimagined take on a classic. Rather than bringing out a bowl of red soup, it was as if any and all liquids were intentionally left in the kitchen — and they weren’t missed. The dish was broken down into its elementary parts, with a generous piece of tomato-glazed pork belly surrounded by a seafood ragout on top of a smoked potato cream.

While the “chowder” combined a number of variables to create one joint dish, the main course purposefully tried to display three very different styles. Mr. Harrington explained that he took literal inspiration from one of Mr. Adams’s performance art pieces called “M Is For” which calls upon Martin (Luther King Jr), (Bob) Marley and Malcolm (X). As such, the main was split into three, with a Southern-inspired molasses-lacquered duck leg with mustard greens for Martin, who was given special recognition in advance of his national holiday. Some surprisingly spicy jerk-flavored yams were added for Marley, and the black currant topping added to the creamy foie gras ganache was in homage to Malcolm’s Black Panther connection.

The wine pairings helped the crowd become more talkative as the evening went on and it ended with a dessert appropriately called “The Good Stuff.” The dish was a masterpiece in texture combinations with a delightfully fresh green apple sorbet placed on top of a white chocolate and fennel cream and finished with a wafer-thin, crispy sugar flake.

Though all of the speakers paid tribute to Mr. Samuelsson in his absence, they all seemed assured that similar nights would likely become part of a regular roster of events at the lounge as he has been passionate about including artwork in the restaurant.

“In the three years of Red Rooster and Ginny’s, art has been a key part of the experience here,” Golden said.