I once assumed I’d rather eat anything over the red, yellow and green layered cake-like cookies. La Bella Ferrara proved me wrong. 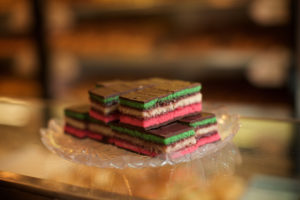 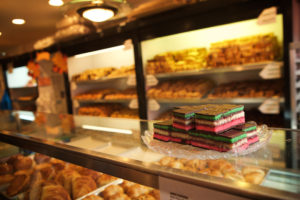 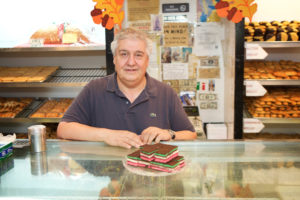 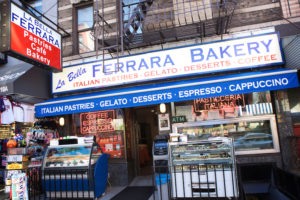 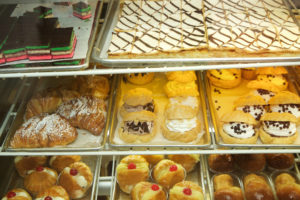 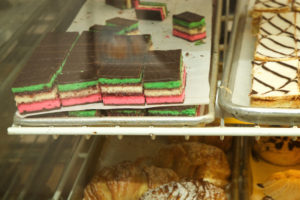 I found myself alone and seeking comfort in cookies last Christmas Eve.

I wove my way from my Chinatown apartment through the throngs of tourists up Mulberry Street to just above Canal. I ignored the offers for knock-off handbags and wallets and instead took a deep inhale of the sweetness outside of La Bella Ferrara.

The almond extract and sugar outside of the small storefront hit me hard. Inside, trays of sugar cookies lined a long table. The glass case on the opposite side stood filled with chilled tarts, éclairs, cannolis and a variety of butter cookies. I managed to resist these delicious distractions, though, to zero in on my first rainbow cookie.

Long picked over on the cookie platter for something with more butter and less food coloring, I assumed I’d rather eat anything over the red, yellow and green layered cake-like cookies.

I ordered one rainbow cookie, also known as a seven-layer. The thin chocolate sheet with a smear of raspberry jam sandwiched between three layers of almond cakes broke in my mouth. I’ve been a believer ever since.

It being that time of year again, I recently returned to La Bella Ferrara to find out their secret.

“There’s a basic recipe for seven-layer cookies, and I like to say ours are a little bit moister because we use macaroon paste in the batter; it’s nice and moist and gives it that almond taste,” says Joey Sferrazza, one of the bakery’s owners. “Ours stay moist a lot longer.”

The assembly can also make or or break a rainbow cookie. Mr. Sferrazza and his staff first make the three sheets of vanilla cake, one with red food coloring, another with green, and the last just plain. After letting the cake sheets cool, the team begins the assemblage: one layer of red, a spread of raspberry jam, a layer of plain vanilla cake, another jam smear and then finally green cake on top.

The layered cakes settle in the oven (heat off) with a weight on them to gently press the cakes together. They melt dark and semi-sweet chocolate in the meantime and pour it onto a parchment paper lined sheet pan before stacking the cake layers on top. The assemblage cools before being flipped over to receive the second and final chocolate coating. 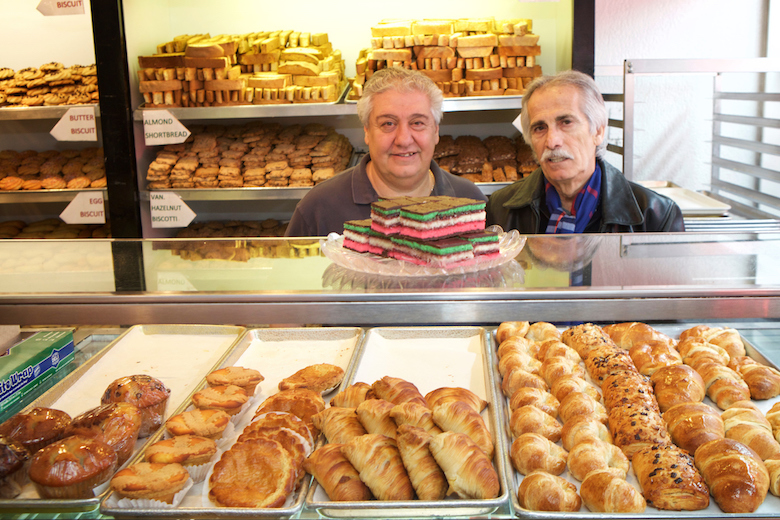 “So many people say, it smells so good I just gained five pounds just standing in here,” Mr. Sferrazza says. “I don’t smell it anymore because I’m so used to it. I wish I could.”

Mr. Sferrazza and his partner, Nick Angelir, have run La Bella Ferrara since the 1970s, but the Italian bakery has been a mainstay in the heart of Little Italy since the 1940s. Named after the Ferrara region, the bakery is unrelated to the popular (and more glitzy) destination of Ferrara Bakery and Café up on Grand Street.

Mr. Sferrazza surmised people tend to avoid rainbow cookies because of the colors.

“I think people think it’s a kid’s cookie, it’s not a grown-up cookie,” Mr. Sferrazza says. “But if you really taste it, it’s really got some different flavors that you can really appreciate.”

While you can’t find anything quite like them in Italy, the Italian flag–colored cookies were developed at the turn of the 20th century by Italian immigrants in America to pay homage to their country.

Mr. Sferrazza is Italian but grew up in France before coming to America at 14 years old, where his family settled in Brooklyn. And his accent perfectly reflects that journey.

He worked in bakeries for most of his life before getting involved with La Bella Ferrara. And as a man whose livelihood depends on sugar, he also wrestles with it as a diabetic.

“I have to be careful, I taste it and I spit it out because I can’t have too much sugar,” he says. “The worst is when I’m on a diet—it’s one thing to work with it every day but when you know you can’t have it, it kills you. You go nuts.”

The rainbow cookies remain one of the bakery’s most popular items, proudly displaying their vibrant colors on the top of the glass display.

“So many people say, it smells so good I just gained five pounds just standing in here,” Mr. Sferrazza says. “I don’t smell it anymore because I’m so used to it. I wish I could.”