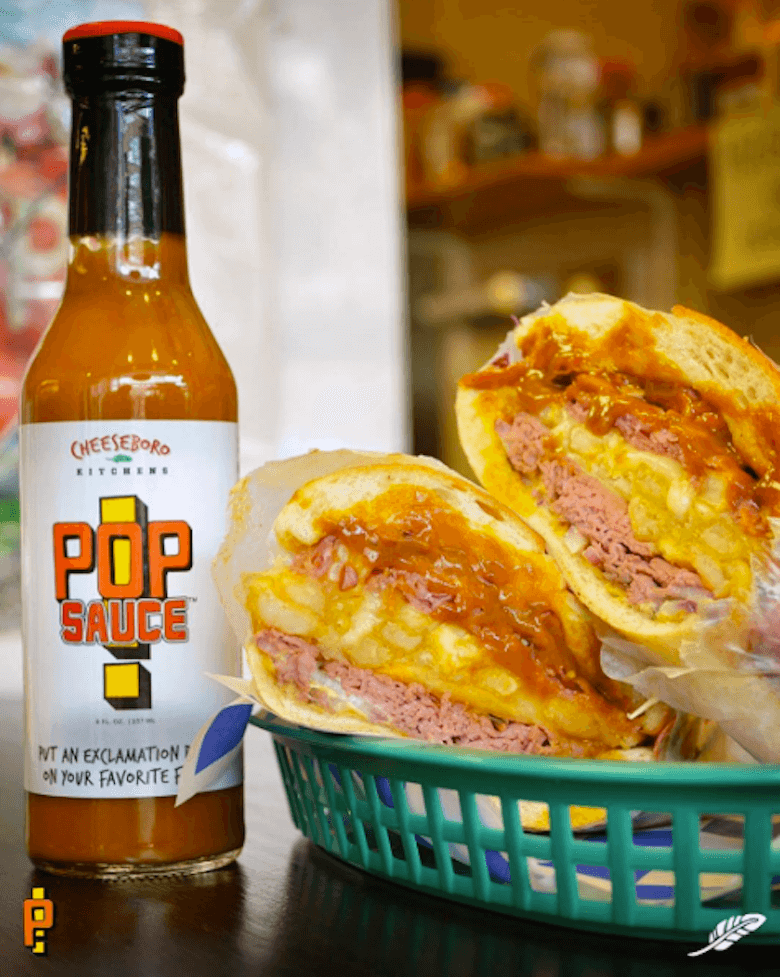 You can add this stuff to everything, including a hoagie. Photo courtesy of Pop Sauce.

While working over 40 hours a week in the New York City restaurant business, 47-year-old Harlemite Kerry Cheeseboro often found himself heading home to 2 a.m. takeout orders that never arrived with the right condiments. “I would order a burger that didn’t have ketchup or mustard. I would order a sandwich that had no mayo,” he says. What might seem trivial to many was the repeated frustration that motivated Cheeseboro to create a condiment that could eliminate his need to ever crave more than one sauce on any of his meals again.

Pop Sauce adds the “Five ‘S’ flavors of savory, salty, sweet, smoky, and spicy to all my meals,” says Cheeseboro about the homemade sauce he first created to give as holiday gifts to his Harlem neighbors and friends. Blending mustard, turmeric, chile pepper, apple cider vinegar, garlic and other natural flavors, Cheeseboro bottled up a sauce that hints at the smokiness of barbecue sauce, nuttiness of mustard seeds and a slight kick that can be said is the spicy, no-additive cousin of Chick-fil-A’s signature sauce.

With the encouragement of his community, Cheeseboro Kitchens LLC launched last year, a one-man condiment company based on recipes inspired by his Southern culinarian father. He inherited his father’s passion for foods and became a familiar face to many food business owners after starting a blog ten years ago that showcased his reviews of restaurants all across the five boroughs.

Owners at the historical Schaller & Weber German market and butcher shop, the original Papaya King, Milk Burger in the Bronx and more received Pop Sauce with open arms when he presented the idea of adding it onto their menus. Papaya King on 86th added the “POP Dog,” a hot dog made with a classic frank, sautéed onions, relish and Pop Sauce onto their signature menu. Milk Burger in the Bronx incorporated the “The POP Burger,” a double cheddar cheeseburger with grilled onions, pickles and some heat from Pop Sauce as a seasonal treat, and more. With an increase in demand since his launch, Cheeseboro has now produced over 150 gallons in the last seven months at a food-incubator space in Bloomfield, New Jersey.

Pop Sauce is, however, more than just an idea that sprouted on a late night; it’s Cheeseboro’s attempt to continue the entrepreneurial food legacy in his family. “My father’s legacy is at stake,” said Cheeseboro, after recalling his father’s journey from the south to New York and the many years he worked as an executive chef at the Columbia University Medical Center before his recent passing. “I’m just happy to be able to honor my dad’s legacy by doing something positive,” he says.

As the sauce picks up popularity around the city, friends and customers have asked, What doesn’t the sauce go on? and raved about its versatility. “It has been enlightening getting feedback and testimonials of Pop Sauce lovers who have come up with more ways to enjoy their Pop Sauce than I could have imagined,” he says. “Burgers, steak, chicken, sandwiches, hot dogs, sushi, salads, seafood, fries, tacos, falafel, popcorn—the list is endless.”