An accidental restaurant wins hearts and minds in the East Village. 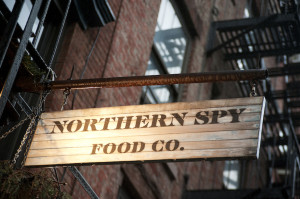 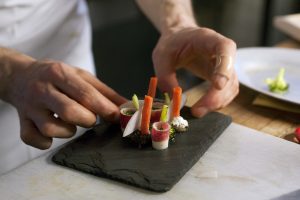 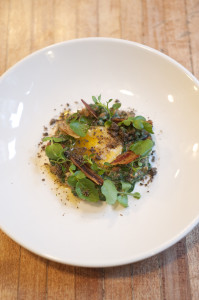 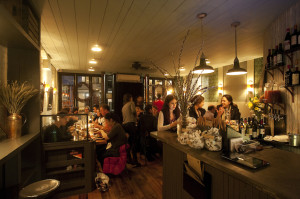 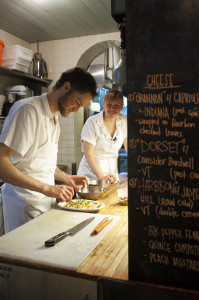 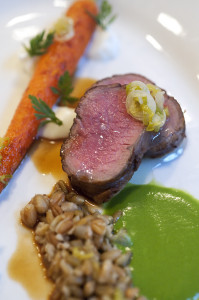 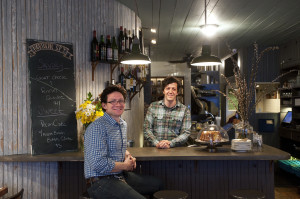 Unless you land a reservation, typically the only way to avoid a wait for dinner at the tiny Northern Spy Food Co.—the lighthearted, laid-back locavore joint on East 12th Street—is to arrive long before sunset, around the time your grandma might dine. But this time of year, there’s no better hour to enjoy the rustic-looking, cozily cramped restaurant, whose pale-blue wooden benches abut windows that let in the late light as spring turns to summer. Plus, this is a place that’s usually best when things are unplanned: Just check the bar-top chalkboard for constantly rotating specials, dictated only by the local harvest and the boundless imagination of the kitchen.

There might be lamb roasted over dried carrot tops and hay, plated with a duo of green garlics—puree and confit—and finished with a drizzle of buttermilk and a scattering of barley. Possibly handmade ravioli, stuffed with the last of the season’s nettles and sent floating in a bowl of clear broth or a slick of nutty browned butter. There may be a bed of sweet asparagus, barely blanched and topped with a bit of vinaigrette and a silky soft-boiled egg. (Simple, admits co-owner Christophe Hille, but “it’s a perfect little dish.”) There will likely be a city riff on the cinnamon sticky bun, whose soft yeast dough has gone gastro, studded with savory slivers of organic pork shoulder that’s been slow-roasted with nutmeg, allspice and black pepper, finished with a glaze made of maple syrup, Dijon mustard and pureed parsnips. (Few farm-to-table restaurants cite the mall as their menu’s muse, but of that glistening, oversized roll, owners Christophe Hille and Chris Ronis are proud to explain, “It’s modeled after Cinnabon!”)

And there for sure will be raw kale salad, Northern Spy’s signature dish: It’s cabbage’s currently culty cousin, deliciously dolled up with roasted Kabocha squash, almonds and a shower of Cheddar cheese. The tiny restaurant goes through at least 120 bunches of those greens a week. (Come high summer, says Hille, they swap out the squash for similarly sweet and meaty stone fruits like plums or apricots.)

The menu might be a high-low mashup—maybe even a little bit all over the map. But while it’s sometimes served up silly, it’s never sanctimonious, often downright delicious—and always seriously sourced.

Named after a variety of apple that grew from a chance seedling in a New York orchard, the restaurant is the fruit of co-owner Hille’s fertile brain. He took an interest in enlightened agriculture before it boomed, working several seasons on a Virginia farm in the early ’90s. Then, after a stint spent running the kitchen at San Francisco’s esteemed seasonal Italian restaurant A16, he moved to New York in 2006 to enroll in the food studies master’s program at NYU. By 2008, Hille—who is given to hours-long, politically charged conversations about food; just check his Twitter feed for hourly proof—knew he wanted out of cooking and in to edible entrepreneurship.

A friend introduced him to Ronis, a 15-year veteran of indie film and music on a similar mission. Ronis had grown up running around his family’s famous (though now shuttered) Philadelphia restaurant Old Original Bookbinders, a classic 19th century lobster-and-steak palace, but he was bowled over by the spectacular produce in New York, and a decade and a half spent “championing the little guy” in indie arts spurred his interested in doing the same for food, which, he notes, is “its own form of entertainment.”

The two joined forces and conceived Northern Spy as a grab ’n’ go good-grub lunch spot over in Williamsburg, complete with a mini-market. But in an ironic twist of real estate fate, Hille and Ronis couldn’t find an affordable space in north Brooklyn. So over the Williamsburg Bridge they came, to a sleepy block in the East Village, where in 2009 the duo opened the shop-while-snacking spot starring Greenmarket-y ingredients. They enlisted Nathan Foot, whose résumé included the now-defunct upscale San Francisco restaurant Myth, to cook simple seasonal dishes to round out their retail sales. The back half of the narrow room stocked artisan pickles, preserves, granola and grains, while up front sat diners, leisurely noshing on Foot’s killer kale salad and crispy potato gnocchi with Brussels sprouts and sage on tables made from old bowling alley lanes.

The key word is “leisurely:” It soon became apparent that people came to Northern Spy for dinner, not groceries, and the jelly jars gathered dust while the kitchen was inundated with orders. So the team nixed the dry goods and added more tables to accommodate the crowds, who found a welcome break from the typical utopian take on farmhouse feasts.

While Brooklyn is home to low-key hideouts serving sophisticated riffs on pedestrian eats with a heaping side of irony, market-driven menus in Manhattan have mostly stood by more straightforward fare. (Momofuku is a delectable exception, bringing a winking sensibility to the neighborhood since Noodle Bar opened in 2004.) But since Northern Spy planted its own playful flag in the East Village, it has paid those Manhattan mores little mind and resisted the mainstream locavore mold.

Yet from the start, ingredients were integral—less in a print-the-name-of-every-farm-on-the-menu kind of way, and more in a fit-a-bicycle-with-giant-weatherproof-pouches-for-thrice-weekly-shopping-trips-to-Union-Square style.

“Christophe will just come and load up that bike,” laughs Stephanie Villani, a co-owner with her husband of Long Island–based Blue Moon Fish, which sells Hille superfresh seafood like striped bass, squid, mussels and fluke at Union Square. “He’s got heirloom tomatoes strapped to his back and blueberries flying everywhere, and he’s packing 40 pounds of bass into his pockets, too.” She and her husband recently came in for dinner and feasted on a squid and mussel ragout—made from their own catch, natch.

“Those guys stay true to the cause,” agrees farmer Guy Jones of Blooming Hill Farms. Twice a week he delivers his upstate crops to the kitchen, including their crisp-tart namesake apples (which might find their way into a luscious pie) and his 20-ingredient mesclun, which features everything from claytonia and minutina to wild spinach and purslane.

And Casey Spatch at Lancaster Farm Fresh, an all-organic co-op of some 80 farms in Pennsylvania Dutch Country, says they’re some of the most curious cooks he sells to: “If the egg yolks are paler one week, they call us and want to know why.”

“That whole crew is just really fucking good people,” echoes boldfaced-name butcher Joshua Applestone, who delivered grassfed heritage meats to Hille twice a week until the company quit the wholesale business to focus on their new storefront in Brooklyn. “Christophe is really articulate, really interesting—I actually have a big crush on him,” Applestone laughs. “We really only [sold] to a handful of restaurants where we know and believe in the owners, and Northern Spy is definitely one of them,” Applestone says. “That’s hard to find.”

Northern Spy still gets whole carcasses to carve up in-house—now they come from Flying Pigs in Shishan, New York—much more work than most chefs are game for.

All told, Hille and Ronis estimate that 55 percent of their food costs go to local farmers and artisans. (The other 45 pennies per dollar buy staples like oil, flour and sugar.) “Politically, ethically, it’s like speaking English now,” says Hille: “I can’t think of operating any other way.” (Although Hille started off doing all the market shopping himself, the restaurant has since hired a staff “forager” for weekly trips to the market.)

Upon Foot’s departure last summer, Hille and Ronis sought a chef with the same small-farm sensibilities and landed a lanky, sweet-faced 32-year-old named Hadley Schmitt. He’d been cooking at Dovetail but his love of earthy ingredients like wild greens and flair for edgy, innovative cuisine come courtesy of a two-month stage at what’s widely regarded as the best restaurant in the world: Noma in Copenhagen.

But while Schmitt has introduced a few experimental elements, he’s stayed true to Northern Spy’s ethos. “I want the menu to walk that line—we have room for both comfort food and things that go a little beyond,” he says.

By “beyond,” Schmitt could be referring to the delicate, complex rye-flour crumble that lines a nest of farro (from upstate New York’s Cayuga Pure Organics) filled with creamed nettles and a runny egg yolk, then scattered with crispy shards of house-cured pork belly. Or the silky slices of striped bass ceviche he serves with pickled Japanese knotweed, a hollow spring shoot he forages himself. His dishes are simultaneously earthy and sophisticated, familiar ingredients elevated to finer dining.

“It’s way beyond kale salad and gnocchi,” laughs co-owner Ronis. Not that those favorites are going anywhere. And the owners will even live out their formative retail fantasy this summer: They’ll be selling simple prepared favorites like kale salad, biscuits and summery vegetable snacks at a small stand at the High Line through November.

“This whole thing is trial and error,” says Hille, shaking his head and grinning. “We make it up as we go along.” As those who’ve waited an hour for a table and plate of that kale know well, it’s working.

In a pot on medium-high heat, cook bacon till slightly crisp, turning occasionally. Turn off heat and remove bacon and all but 1 tablespoon of bacon fat. Allow bacon to cool and cut into 1/2-inch lardons. Reserve bacon fat.

Put the pot back on medium low heat, add onion and sliced garlic cloves, sprinkle with salt and sweat until soft and sweet; add the olive oil, fennel and spring garlic bulbs, season again, and continue cooking until soft. Add 6 cups water. Turn heat to medium high, bring almost to a boil, then simmer until onion is tender, about 10 – 15 minutes. Add spring onion tops, season the liquid with salt and a few grinds of white pepper, simmer for 2 more minutes and transfer contents to a blender. Puree until smooth and pass the liquid through a fine mesh strainer.

Meanwhile, toss the country bread in the reserved bacon fat and toast on a sheet pan in a 350 degree oven until golden and crisp.

Divide soup into bowls and garnish with bacon lardons and croutons.