Seamus Mullen once ate a tiny egg sandwich in Spain, and he can’t stop cooking it. 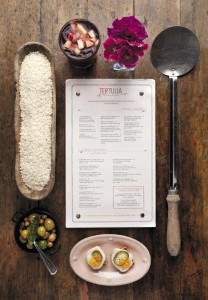 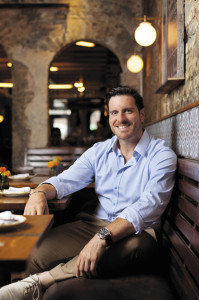 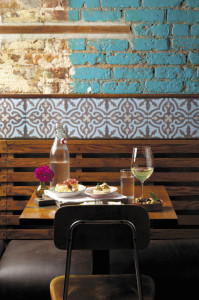 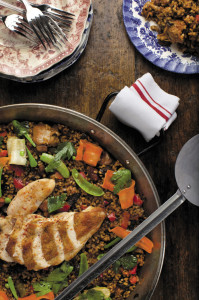 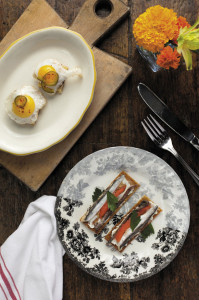 This is the history of one man’s love affair with a country not his own told through fucking awesome.

The man is Seamus Mullen, the 40-year-old chef and owner of the lauded West Village tapas restaurant Tertulia; the country is Spain and the fucking awesome is otherwise known as cojonudo. Besides being an enthusiastic ejaculation en espagnol loosely translated to “fucking awesome,” cojonudo is the ur-pincho, the mother of all tapas, and perhaps the most delicious bite in the world.

“Basically,” explained Mullen on a recent Tuesday during a rare quiet moment at Tertulia, “it’s a piece of chorizo and a fried quail egg served on a piece of bread.” In other words, it’s a mini Spanish Egg McMuffin, but so much more. For Mullen, cojonudo has come to symbolize all that Spain is and all that he loves about her. A cojonudo is his edible talisman of his long-running affair with Spain.

“I’ve always had a version of it on the menu wherever I go,” he said, “and I always will.” Though the charm of a cojonudo is self-evident, for Mullen its appeal runs deeper than deliciousness. In fact, it starts in a small former mining town on the border of Vermont and New Hampshire called Vershire, where Mullen grew up. (Vershire is a portmanteau of the two states.) “It’s about as far from Spain as you can possibly get,” said Mullen.

Vershire has 629 inhabitants, no high school and two worlds. “There is Old Vermont,” said Mullen, “and New Vermont.” New Vermont “is what we think of in New York when we say it’s such a progressive state. But old Vermont is a backwoods agricultural community.” Think blue collars and necks of carmine.

Since Mullen’s parents, a former high school teacher and a college grad turned organic farmers, moved there shortly before Seamus was born, Mullen was New Vermont but Mullen’s middle school classmates — all six of them — were notably Old Vermont. “There was no one I could really relate to,” he said.

So the young boy sought friends in the forest, in whose streams he would fish for brook trout; in the kitchen of his family’s farmhouse, where his grandmother, a commanding English-woman who had trained at the Cordon Bleu in the 1930s, would help him cook his catch; and in the hardscrabble pizza parlors of New England, called Houses of Pizza, where he would come to love the boiling crispy discs of pepperoni, like lifeboats on a sea of oil-slicked cheese, that dotted his slice. This was the closest thing to a cojonudo a lonely boy in Vermont could have, and though he didn’t know it then, a precursor of much better things to come.

But everything changed when the 15-year-old, now square-jawed and ruggedly handsome, enrolled in a blue-chip boarding school called Northfield Mount Hermon, a sort of left-leaning Hogwarts in Massachusetts. Here the circumstances of Mullen’s life shifted, bringing him in ever closer orbit of fucking awesome. At 17, with a precipitous GPA, a particularly nurturing Spanish teacher suggested Mullen spend his senior year abroad. NMH offered only one choice in Spain: Burgos, a small city near Rioja, best known as the home of an awe-inspiring gothic cathedral and the old Iberian war hero El Cid.

“I was ready for an adventure,” Mullen recalled, so to España he alit. He packed up a few duffel bags, boarded an Air Iberia flight from JFK to Madrid and took a bus to Burgos.

It was 1992, said Mullen, “an amazingly important year for Spain. It was the 500th anniversary of Columbus” — yes, I say, I know a rhyme about that — “and the summer Olympics were in Barcelona.”

Mullen lived with a host family presided over by a school-teacher named Jose Maria and his wife, Rocio, the daughter of a winemaker. Balding and blessed with a little paunch, Jose Maria favored classic Spanish teacher garb like horn-rimmed glasses, a forest green blazer and canary yellow button-down shirts. Like many in Burgos, he belonged to the Spanish Communist Party, the PCE, and was fiercely proud of his country.

Though he had a son Mullen’s age, the father’s own boy was uninterested in his patrimony in the same way few Manhattan teens care about MoMA. But Mullen was enthusiastic. Together the communist professor and the American boy explored the graceful flying buttresses of the cathedral, the local stadium where Real Burgos FC would fight to a mediocre season in La Liga, the cinematic sawdust-and-blood gore of the bullfight. They visited the butcher shops of Burgos, ate prawn-filled paella, and Mullen saw row after row of jamón ibérico, skin still on, hair still bristling, hanging by ropes from the roof of a cave.

“It blew me away,” he recalled. “Not only the food but how certain and clear the Spanish are of who they are.” And, perhaps most importantly, his host father brought him to the rundown no-name bars found in every Spanish town where pinchos are served.

Jose Maria’s watering hole was appropriately named PCE. “There were no seats, just kegs; no tables, just barrels.” Mullen remembered his host father drinking rosé. “I only knew the wine from Blue Nun ads I saw on television,” he said, “so I was surprised to see such rough-and-tumble guys drinking it.” But the leftist teacher and his comrades — “poets and playwrights, but mostly drunks,” said Mullen — welcomed the young American with the halting Spanish into their bar.

“It was the first time I had been in a bar,” Mullen recalled, “and here I was, being treated like I was one of them.” Eventually Jose Maria ordered some snacks, and a few fateful minutes later, on top of the scuffed barrel-turned-table arrived cojonudo on a small porcelain plate. Mullen regarded the tiny quail egg. “It was like looking at a fried egg in miniature,” he recalled, noting that at this point he was more than a little tipsy. “It was very Alice in Wonderland.”

He picked up the cojonudo and, following the lead of the older man, popped it into his mouth. The chorizo was crispy and spicy; the egg was perfectly fried so the yolk, though tiny, was expansive as it broke; and the bread, now soaked with the oil from the chorizo, was both the conveyor of the pincho and the cleanup crew. “It was revelatory,” said Mullen, “like the best pepperoni I had ever had.” Was it that Mullen had finally found a community? That he was being accepted as a man among men? An alchemical combination of crisp rosé, callow youth, the rapid patter of Castilian that fused Spain with a tiny sandwich into an obsession for Mullen? Probably all of that. Or maybe it was just the pepperoni. But out of that moment came a lifelong love affair with cojonudo.

At the end of that year, Mullen returned to the States. He went to college in Kalamazoo, Michigan, and eventually became a chef. He worked in a number of restaurants including Mecca in San Francisco and New York’s crudo and returned to Spain to apprentice at Andoni Luiz’s Mugaritz in Donostia and at Albac and Alkimia in Barcelona. Through his years on the line in fine-dining kitchens, Mullen’s skills were burnished but he yearned not for foamy sea flavors of modernist cuisine but for the pinchos and tapas, the camaraderie of cider houses and cervezerias that he found in Burgos and Barcelona. He was a family meal man. “All those chefs are rooted in the rustic traditions,” he said, “no matter how abstract their food seems.”

When he returned to New York, to open Boqueria in 2006, and, in 2011, Tertulia, he carried the cojonudo with him. At Tertulia on a recent Wednesday night, long golden ribbons of Tx-acolina ran from bottles into glasses and a leg of jamon was being devoured, one deep-red, razor-thin slice at a time. This wasn’t the PCE or even close to what one might find at a normal cervezeria in Burgos. But, said Mullen, that’s not the point.

“This isn’t a re-creation or a transplant of a Spanish bar to New York.” Instead Tertulia has its own history, rooted in the United States, in a space that was once a famous speakeasy. The light that floods in from the skylight: New York. The barrel behind the bar from which beer pours: Vermont. The fading paint of bricks: painstakingly aged by designer Jason Volenec. The conversations: shouted, lively, brainy, about the LIRR and public schools. And though the menu is phenotypically Spanish, the ingredients mostly hail from upstate fields, even for his killer cojonudo.

These days he calls it, as per the standards and practices of our time, “deconstructed.” He’s replaced the chorizo with a crispy pig’s cheek made on the grill and offloaded the spice to a sliver of pickled pepper. The quail egg is still fried and perfect and the little bit of bread a delicious Western Union of flavor. It’s still the perfect bite: heat, meat, acidity, egg, bread, a country in a mouthful. This cojonudo owes much to Spain but here it belongs to Seamus Mullen, too. And it is fucking awesome.

From jamón ibérico to the Catalonian chateau with the longest days in Spain, get Chef Mullen’s travel tips at here.