A carefully curated feast under one roof. 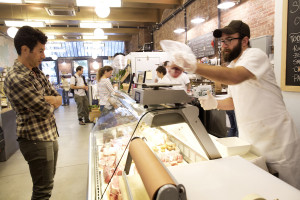 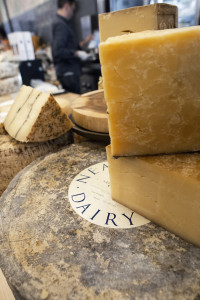 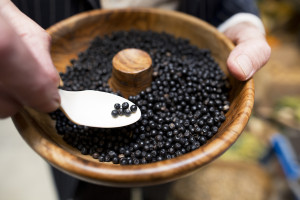 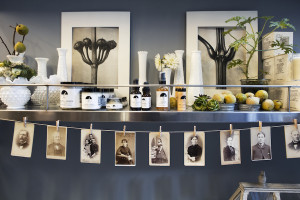 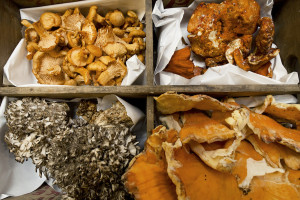 Not long after Tribeca’s aptly named craft food hall All Good Things opened in September, Dean & DeLuca co-founder Giorgio DeLuca dropped in for a look. Taking in the collection of artisan vendors that threatens to put locals off Fresh Direct forever, he told Kyle Wittels, the man who made it all happen, “This is exactly what I was trying to do when I started.”

Had such a rich selection of domestic small-batch retailers existed during the dawn of DeLuca’s gourmet enterprise 35 years ago, he, too, would surely have wrangled Dickson’s Farmstand Meats, Orwasher’s bread, Blue Marble Ice Cream, Nunu Chocolates, Blue Bottle Coffee and Cavaniola’s cheese, condiments and cured meat. Bringing chef Ryan Tate, formerly of Savoy, on board to create a sophisticated oyster bar menu for upstairs and a fine-dining restaurant downstairs would have been the crema on his espresso.

To an even more extreme degree than at Dean & DeLuca, All Good Things’ edibles are edited down to a handpicked best of the best. And, taking a page from the modern market mindset, vendors run their own stands—but the setup is stripped of any pressure to get there on the right day at the right time.

The project began in 2011 as a dream shared by Wittels (whose family bought the building in 2005) and his then-girlfriend Camilla Wilson. After considering a life upstate making farmstead goat cheese, they decided Tribeca was in need of great groceries, and set out to create an artisanal market.

Wittels, who brought no food-biz experience but had worked as an interior designer, broke down the warren of rooms, exposed some of the building’s brick wall and 1940’s sea-green paint, and installed beautiful Moroccan floor tiles and arched plaster lathe ceiling panels covered in gold-leaf-speckled gilder’s paste.

Meanwhile Wilson, who grew up watching her mother run the SoHo caviar and vodka lounge Pravda, recruited the city’s best niche nosh retailers, including Dickson’s for its superior, sustainable meats and Orwasher’s, the nearly century-old Upper East Side bakery that still makes the pumpernickel, rye and challah of old, along with newer styles based on grape-infused starters. The project offered these businesses a way to expand their brands without having to schlep tables and tents to outdoor markets or sink serious dough into building a new shop from the ground up.

The couple seemed to have all the ingredients for success—until they broke up. It wasn’t until nine months later that Wilson came back on board to run the day-to-day operation.

Despite that split, the place feels like family. Many vendors have even become each other’s customers in a sort of retail cross-pollination: Blue Bottle buys chocolate from Nunu for their caffé mochas, while bar sandwiches feature Cavaniola cheeses and Dickson’s Farmstand bacon.

The bar and restaurant mean shoppers can buy ingredients for a home-cooked meal or sit down over plates prepared by Tate, at the upstairs bar or downstairs at Le Restaurant. In sourcing, the chef draws on his Savoy connections: produce from Berried Treasures, Blooming Hill and Samascott Orchards, and spectacular seafood from Pierless Fish, North Rip Trading and Sea to Table. Tate strives to deliver unusual or hard-to-find ingredients such as Romanesco cauliflower, blowfish tails or wild Belon oysters—nothing pleases him more than introducing lesser-known parts of fish to customers, and he’s delighted that Asian customers have come in for items like cod head and yellowtail collars.

As at the market, Tate’s tight menu emphasizes quality, not breadth: Le Restaurant, which should be open by the time you read this, features one set menu a day in the $70 to $90 range and a wine list of only five bottles.

Wittels is firm in his commitment to limit his offerings and deciding for customers what’s best for them, not the other way around. “Jiro [Dreams of Sushi] is our employee video,” says Wittels. “You can’t pander to your customer. We’re consultants to them, advisers.”