“Even the food will amaze you, like if you get any meat dish they’ll cook it in front of you but not on a stove. I know pretty cool right?” 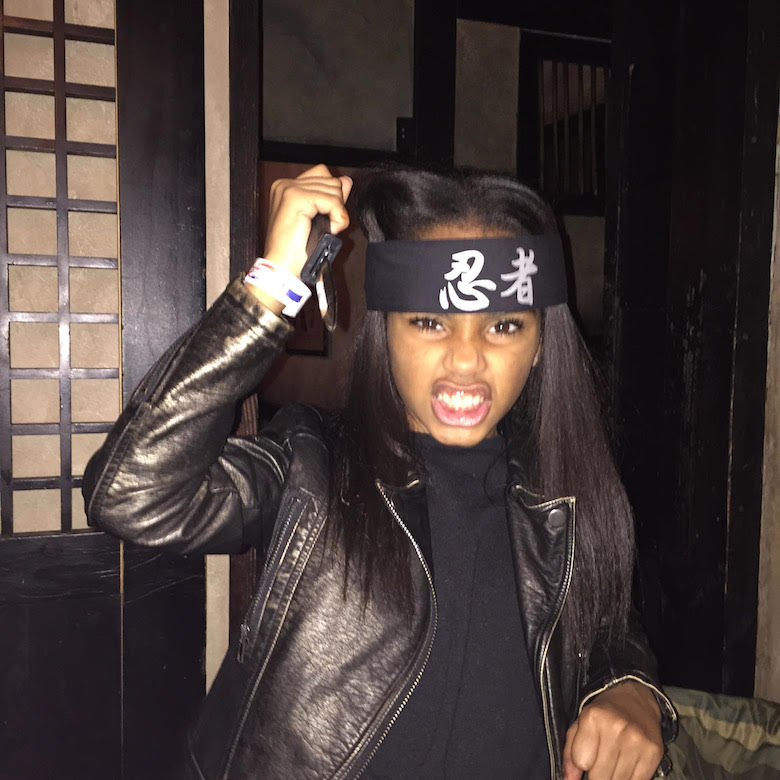 Our restaurant reviewer at Ninja.

Do you like to be scared when you eat? Would you enjoy, say, a sneak samurai sword held up to your neck, right before you dig into some ramen? Or maybe flames, suddenly leaping toward the ceiling, from what seemed like a normal fish entrée? Consider carefully — is this your scene?

If you aren’t totally sure, you’ll probably have to visit Ninja (speakers down for the link click). Nestled in the heart of TriBeCa, this nominally Japanese restaurant is wall-to-wall novelty. The interior looks like some Disney version of feudal Japan, a mash-up of ornate woodwork and fake cave walls. It’s very weird and entirely underground (your cell phone won’t work).

I went there recently with my favorite cousins Chloe and Geo, a celebration of little man’s 14th birthday. Geo had a couple of his boys along, so there were moments when he played too-cool-for-Ninja — but I know he was into it. How could he not be? Samurai-clad waiters yelling all the time, trying to startle you with weapons. Lots of things on fire, paired with Vegas-style optical illusions. And the grand finale — a magician!

I loved the magic guy, I cannot lie. He did a meta schtick, where he recognized it’s a bit melancholy to be a pudgy dude in his 40s working as a magician in a ninja costume. Jokes about divorce, drinking alone, etc. But also fun! Great sleights of hand and banter with the kiddies.

Overall I’d say the experience was a little taxing. On top of all the novelty, there was just so so much food (look at it!) A meal at Ninja is pricey, but you feast hard. It’s more gourmand than gourmet — I was a little queasy by the end. You might describe the fare as “Asian-ish” but that would be missing the point. I mean, their signature katana dish is a Flintstones-size Angus steak, served on a plank, with fried risotto, Alaskan king crab and tomato-mango sauce, topped with white sauce and melted cheese. Thank goodness for $3 Sapporos.

But wait, why am I telling you this? My wee cousin Chloe the restaurant critic was there, too, and honestly the place is more for her than for me. Plus she’s just a better reviewer than I am. Take it away, Chloe Star:

Deep underground in New York City lies the most secret restaurant where…………….wait restaurant? Yup this is an awesome place you can eat but still be entertained amazingly! Even the food will amaze you, like if you get any meat dish, they’ll cook it in front of you but not on a stove. He or she will hold it then take a lighter then light it on fire! I know pretty cool right? One of the kids dishes called “the ninja castle” they literally give you a toy castle and every single floor is a different mini meal and when they first give it to you there’s a sparkler on the top. At the very end someone will come to you with a couple tricks up their sleeves and show you a special magic show or should I say ninja show. So on a scale of one to ten I would give it a one thousand. 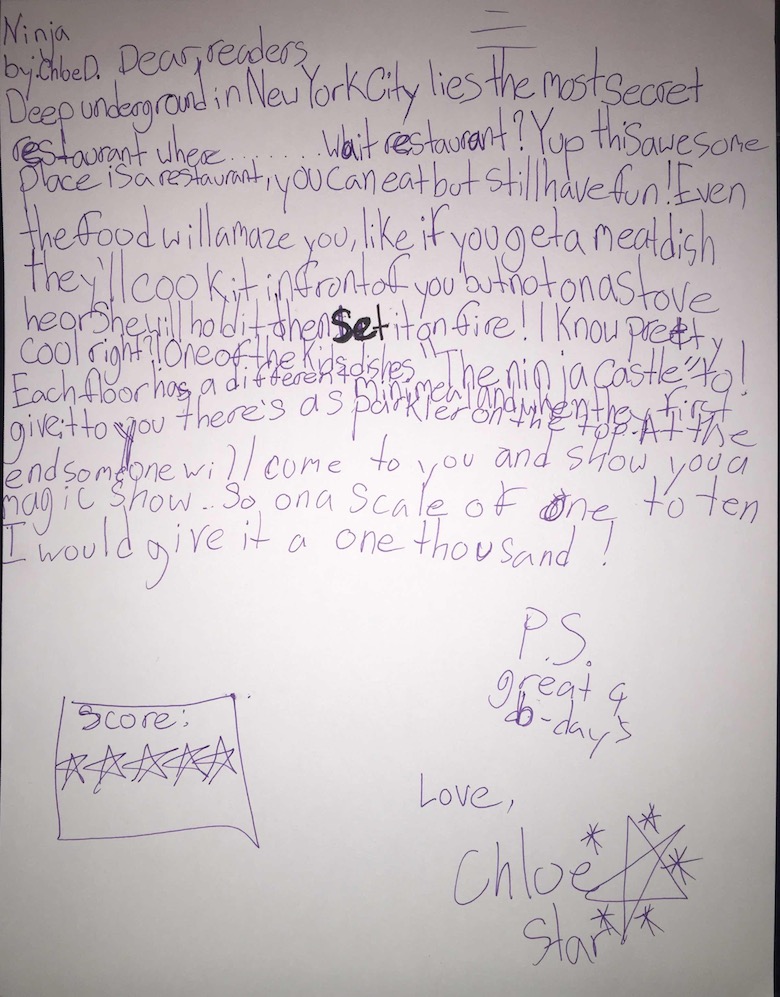