With food, she can express everything she needs to while flying relatively under the radar. 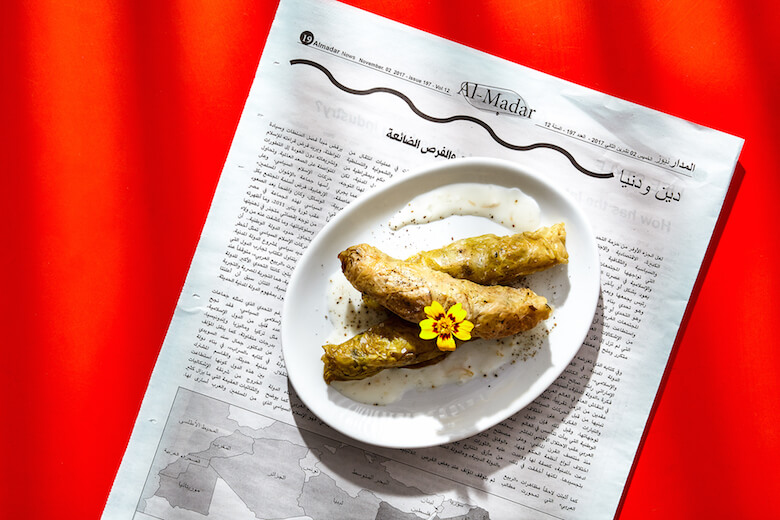 Her dinners are small 25- to 30-person affairs, taking on Palestinian culture and cuisine from a distinctly Palestinian-American perspective.

The food media and industry talk a lot of game about “activist chefs,” those folks who work to create better public school lunches, uplift small farms and ranches and provide more diverse and healthy meal options in low-income communities. For many of those chefs, their work in food brought them into contact with deeper issues of social inequity, and they wrangle their expertise into the means to make the world more just. But for Palestinian-American chef and artist Amanny Ahmad, her culinary work exists in service to her activism.

Her Palestinian food residency—called such because “pop-up” reminds her too much of retail, of consumption—at NYC’s Dimes restaurant is an intimate meditation on what it means to be Palestinian, to be from a place whose cultural markers are so contested and forced into darkness by a political landscape that even the identity of hummus is fraught with geopolitical tension.

Ahmad’s dinners are small 25- to 30-person affairs, taking on Palestinian culture and cuisine from a distinctly Palestinian-American perspective, yet finding curious intersections as, Ahmad says, “someone who grew up eating Hot Cheetos.” They’ve ranged from a more traditional menu to ones that are more conceptual, like a psychedelia-themed one that referenced that aesthetic’s influence in Palestinian pop culture. In addition to crafting the menus, Ahmad curates the music playlist and indulges her interest in ikebana by creating floral installations. In that intimate space, she aims to consciously nudge diners into a mindset that asserts Palestinian identity and showcase its richness and complexity.

Appealing to the downtown crowd’s sense of style is a key part of her strategy. “Activism can be aesthetically unappealing, assaulting or preachy in a way that inhibits engagement,” she says. “Maybe that’s superficial, but if people aren’t attracted to the work, they won’t pay attention. I want to show them a solution they can be attracted to.”

Ahmad has spent “a lifetime” trying to figure out how to reach the public, using her art-school pedigree to hone her message and create what she calls a “context of compassion” as a counter to mainstream rhetoric about her people, whom the media often casts as terrorists or refugees, if they’re discussed at all. She’s not shy about the philosophical underpinnings of her approach, either: “I always say that it would be my dream for Noam Chomsky to show up at one of my dinners.”

During our phone conversation, I could sense Ahmad, whose family hails from the West Bank, carefully weighing her words, doing the mental calculus necessary to determine whether the things she wanted to say would come back to bite her later. “I’ve been feeling as conflicted as ever,” she wrote in an follow-up email, “wanting to be free to resist and also wanting to be free to resist without worrying that I could never go home to see my family again, or sit in my favorite fig tree or go to Ramallah to buy produce with my grandmother.” Being associated with the Boycott, Divestment and Sanctions (BDS) movement is a risky prospect, both in Israel and in the United States. Ahmad’s career as a chef, artist and activist is characterized by this tightrope walk: Because of the kind of person she is, she can’t keep quiet about the things that matter to her, and because of the kind of person she is, she can’t say too much.

But with food, she can express everything she needs to while flying relatively under the radar. It’s a prime metaphor for conflicts over cultural identity, as persistent arguments over the Arab or Israeli origins of foundational dishes like couscous or shakshouka have shown. Ahmad is frustrated with the food media, which she says plays into the erasure of Palestinian contributions to the area’s cuisine. “I’m not trying to delegitimize Israeli culture or cuisine in general,” she explains. “The only issue is when Palestinian history and culinary heritage using the same geography and ingredients is erased or eradicated, like with other indigenous cultures around the world. We just allow whole communities to be absorbed by their occupiers.”

She fights this quietly, finding great satisfaction in working with the Palestinian Heirloom Seed Library, a West Bank–based community organization that aims to collect and propagate rare seeds to preserve the biodiversity and agricultural heritage threatened by the loss of land owing to the occupation. Her latest collaboration, a dinner series called the Asymmetrical Table, donated all of the proceeds to the seed library. “No one can argue against the fact that people need to be able to eat,” Ahmad says. “No matter how people identify, food is their right.”