On the Line at Esca

David Pasternack, who since 2000 has been executive chef and co-owner of one of New York’s most celebrated seafood institutions, is not the kind of cook who is tempted by celebrity or stage lights, unless they’re to help him find the right lure in a tackle box in the dark of the early morning sea. 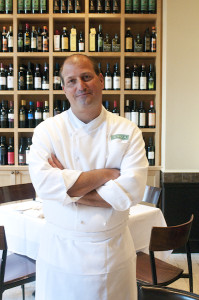 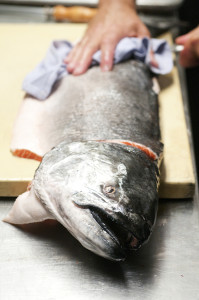 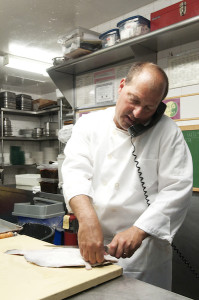 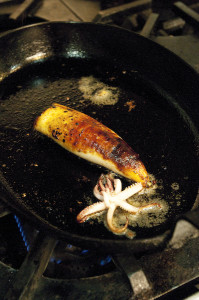 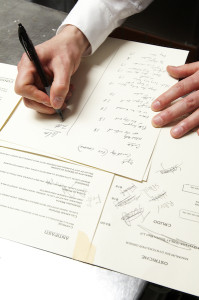 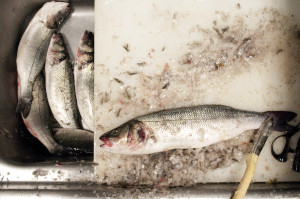 David Pasternack, who since 2000 has been executive chef and co-owner of one of New York’s most celebrated seafood institutions, is not the kind of cook who is tempted by celebrity or stage lights, unless they’re to help him find the right lure in a tackle box in the dark of the early morning sea, part of a ritual he likes to engage in at least once a week.
He’s not going to offer bait-and-switch flavors, tell a fish tale or hook you with dazzling distractions on the plate so you walk away with starfish in your eyes and a murky sense of what you did or didn’t just eat. This chef wants you to know exactly what you ate—which, if you’re lucky, he might have reeled in himself and garnished with a harvest from his own garden.

This is the chef, after all, whom New York Times then-critic Frank Bruni christened “the fish whisperer” in a 2007 three-star review. He’s the chef who put that most ethereal of fish preparations—crudo—on the food map the day he opened, and landed a 2004 James Beard Award for Best New York Chef. He recently took Anthony Bourdain on an angling trek for Bourdain’s TV show No Reservations. And not long ago, when he made seafood salad at the New Amsterdam Market, Jodie Foster lined up for a taste, sadly a bit too late. “I said, ‘Sorry, ma’am,” recalls Pasternack, “you’ll have to come to the restaurant.”

There, on East 43rd Street, his cooking space is tidy, gleaming and, indeed, little larger than a galley kitchen, and on a recent morning Monday I meet him there. The only decoration is a few colored wall tiles of a cartoonish full moon, overseeing the tides as well as the ebb and flow of this restaurant’s decade-plus career. Pasternack is standing at a small stainless-steel prep table, readying pink snapper for the evening’s crudo—the dish that launched a thousand ships; or, at least, turned a bazillion New Yorkers on to the ceviche’s olive-oil-kissed cousin. He holds his Dexter and Russell 6-inch carbon-steel blade up to the fish and starts taking it apart—a fast, deft slice at the gills, down the back, a loosening of the spine, a quick flick inside the flesh, then the fish is flipped open wide, zipped in half, sliced off, flipped over, Pasternack’s movements as fluid as a sea-bound stream. Next he takes each fillet and—zip, zip, zip—cuts it into rectangular, inch-plus-long bites. The way his knife moves, so easily flowing and steady, it’s almost like an extended appendage. Methodically, the knife is cleaned, the bloodied cutting board wiped, a new fish appears, and he begins again. Over and over and over.

Pasternack—tan with a golden glint to his sandy hair from recent fishing excursions, his once-fuller frame trimmed down from biking along the boardwalk near his Long Beach home—moves on to swordfish. Pausing from the prep work, he picks up a raw piece and holds it out to me with a single word: “Here.”

We’re hours away from lunch and all I’ve had in my gullet so far is coffee, so initially I’m not sure if he wants me to just examine it or eat it, but it quickly becomes clear that those are one and the same. I take a bite, and it is plush and velvety but also firm, clean and bright on my tongue, the freshness intense. A plate of grits and eggs arrives, and—flop, flop—he tosses three more pieces of that raw fish on top of the creamy cornmeal. “Sailor’s breakfast!” he laughs.

Fish, pretty much, is Pasternack’s life—but not only in a culinary context. From the time he began fishing with his dad as a kid, Dave has loved nothing more than to glide along the waves, rod and reel in hand. “That’s what it’s all about: putting meat on a hook,” he says.

“I love the solitude of it, and being outside. I love the art of the hunt.” He has fished in countless waters, from Wyoming to the Puget Sound, but he’s happy to cast his rod right here. At least one day a week, he fishes about 500 yards from his home in Long Beach, which he shares with his wife and daughter. He also often goes out with some commercial guys, his favorite a former corrections officer named Vinny who has a business based out of Jamaica Bay and whose constant boat companion is a blind man named Frank. “We’re friends. He calls the juice from my seafood salad God’s Viagra.”

“He’s a pathological fisherman!” laughs Bourdain a few days after his watery tour of Brooklyn’s Sheepshead Bay with his fellow chef. “He knows how fish live, what they like to eat. He knocks off work and fishes by himself. That’s not normal! But for a chef of a seafood restaurant,” Bourdain adds, “it’s completely inspirational. He understands what makes great fish—and what to do to them.”

Which is why, when Mario Batali and Joe Bastianich were looking to open something new in the dawn of this millennium, they courted Dave heavily. But to hear Pasternack tell the story of the world-famous chef-and-restaurateur team’s cajoling, it sounds more like a casual conversation that happened at a clambake at the beach.

“I was running Picholine,” he says, referring to his tenure as executive chef at the lauded French eatery (there, too, he was awarded three New York Times stars; that time, by Ruth Reichl). “Mario said, ‘Let’s do something. Let’s do an Italian seafood restaurant.’ So I negotiated a good deal.”

This is not to sketch Pasternack as the Morton’s Fisherman of chefdom; the salty dog in the rain slicker with a pipe dangling from his wind-chapped lips. Just understated and … honest. Which is to say, a lot like his food.

“He’s not about tormenting his food into shapes,” says Bourdain. “And he’s the last guy who wants to run the ‘Restaurant of the Moment.’ This is a guy who made great food on Day One, and has been making great food every day since.”

After a dozen years at the helm of Esca, its classic dining room in those elegant tones—walls of cream and butter, trim of dark wood and coffee-hued granite—this demure, dependable, theater-district flagship is still an opus to the sea, the menu as fresh and bright and inspiring as that plush piece of raw swordfish. “Esca has gone from being a cool newcomer to being a classic—something very hard to do with seafood,” says Paul Greenberg, author of the Beard Award-winning sustainability tome Four Fish. “It’s very hard to find a place that has consistently high quality product,” he adds, “the supply chain is so chaotic. There aren’t many chefs out there who have a real feel for fish and can navigate the supply chain will enough to raise the bar high, all the time. Since Dave’s a fisherman, and a good one, he really gets fish, viscerally, and that’s what makes his cooking stand out.” It also doesn’t hurt that, unlike Batali, Pasternack is usually in his kitchen.

When he’s not out there angling or over at the Eataly fish market or doling out seafood salad or chowder at the New Amsterdam market, he’s right here, overseeing that famously sublime crudo, like the velvety diver scallops kissed with a sunny squeeze of tangerine, aromatic olive oil and the crunch of judiciously speckled sea salt; the wiggly strands of housemade guitar-cut spaghetti swathed with briny sea urchin and sweet crab meat; the spigola nera—meaty black bass reeled in from local waters, roasted whole and dotted with olives and caper berries, mimicking the salty, snappy sensation of the watery place from which it came.

The topic of sustainability is an admittedly complex one for Pasternack. He cares deeply about the health of the waters and the finned communities therein, but he also holds quite a bit of empathy for his fellow anglers—including commercial fishermen. He feels the tug of brotherhood with the salt-cured early risers who make their sometimes-sporadic living based on what they haul in. Still, fraternity or no, Pasternack is excruciatingly exacting about what’s on Esca’s plates. Chilean sea bass, for instance, has never darkened his door and tilapia, while supposedly sustainable, is often fed a diet of soy, plus the chef just doesn’t find it delicious: “It’s murky,” he says flatly. But there are plenty of other fish in the sea, and his standbys range from Alaskan wild salmon to Mediterranean baby octopus to squid caught just of Long Island.

Pasternack goes through a whopping $30,000 to $40,000 worth of seafood a month, and to make sure this boatload of product is top-notch, Esca casts a wide net among purveyors, dealing with dozens. And each knows that a single imperfect delivery could mean the end of a relationship. “My purveyors understand that,” says the chef. “Like my guy at Gosman’s. I asked him the other day, ‘You got fluke?’ and he said, ‘It’s not your quality.’”

Pasternack combs over the menus every day, tweaking based on what’s best and how that fish—be it Mediterranean bream or local black bass he caught himself—is best expressed on the plate. Around 11 a.m., he sits in the center of the dining room for the daily pre-service staff meeting, rubs his face like a boxer trying to revive himself, and folds his arms. The dining room manager rushes in with a fresh printout of the menu they’ve worked on all morning, and all eyes turn to Chef. He enunciates every fish and accompanying ingredient as if doing rollcall:

“Wild Wellfleet oysters. And they don’t come from Duckberry! It’s like telling someone from Brooklyn it comes from Queens!

“Chef!” pipes up one server who’s been furiously scribbling notes. “Remind me of kingfish’s flavor.”

And on and on, with the occasional pop-quiz query thrown in from Pasternack to an unsuspecting member of his crew. And he’s back to the kitchen, finishing up the last of what needs to be done before the first footsteps of lunch diners have filed in—on business or before a matinee or perhaps just on a whim for Pasternack’s storied seaworthy talents.

He turns back to the paper taped up on the wall in front of him and jots something on it with the pen; it’s yesterday’s menu, chock full of things they are out of and full of the scribbled substitutes that mark the work of rebuilding the dishes for tonight’s dinner based on the fresh, floppy creatures that have just come in. Soon he’s back with a knife in one hand and a breathtakingly fresh fish in the other. Determined, understated and exacting—12 years in, he runs a tight ship

“How are you, Chef?” a white-coated prep chef calls as he zigs and zags over to his station. Pasternack, pausing only momentarily, looks at the young man peripherally with a fish-eyed glance and exhales a one-word answer: