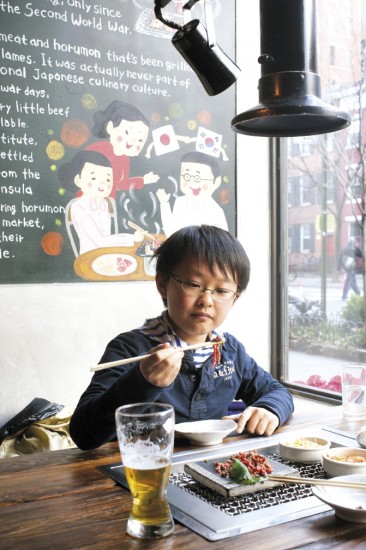 At precisely 6:45 on a Monday evening, a white stretch limo pulls up in front of restaurant Takashi in the West Village. Eight Japanese people tumble out, pose for a picture in front of the limo and make their way inside for their 7 p.m. reservation.

The restaurant specializes in horumon, offal and variety meats served cooked and raw. Not only is the chef committed to serving as much of the cow as possible—menu items include three different cow stomachs, large intestine, sweetbreads and cheeks—he sources locally whenever he can: super-fresh beef heart and liver from Dickson’s Farmstand Meats, hard-to-come-by monkfish liver from Long Island’s Pura Vida Fisheries, and whatever’s in season at the Greenmarket.

For some guests, though, the experience is less about Takashi’s locavore credentials than about the taboo-breaking frisson that comes when digging into calf’s brain cream tube with blinis and caviar (the brains are laboriously boiled, soaked, sautéed and spiced, then blended with heavy cream and olive oil and molded in repurposed paint tubes); beef heart chili with mochi rice cakes and cheese; or the eyebrow-raising testicargot, described on the menu as “cow balls escargot style w/garlic shiso butter.” (Queasier diners can opt to grill platters of richly marbled U.S. Kobe rib eye or premium short rib instead.)

It’s daring fare, yes, but what keeps Takashi from being a mere novelty restaurant is the quality of the ingredients, the deft touch with which dishes are assembled and the chef’s unerring palate. Some of the items on his menu, confesses Inoue, “are parts I never used in Japan. I just wanted to use the whole cow, and thought, ‘I’m using stomach, why not brain? Why not testicles?’ I wanted to challenge myself.”

It wasn’t Americans’ resurgent interest in nose-to-tail cooking that prompted this idea, though, says Inoue, who worked at restaurants in Japan for 12 years before opening Takashi in 2010.

“I was more focused on bringing my Osaka-style soul food to New York,” he says.

Although there are other yakiniku restaurants in New York, none serve the offal and variety meats that Takashi does.

For pristinely fresh beef heart and liver—parts of which he serves raw, sashimi style—Inoue turns to Chelsea Market–based butcher Jake Dickson, who sells only meat and poultry raised right on small upstate and Pennsylvania farms he’s personally vetted. High-quality beef liver is only available on occasion, and when it is, only the very tip of the roughly 15- to 20-pound organ can be served raw, explains Inoue, perhaps five orders’ worth. The rest will be grilled or used for pâté.

“Every piece of meat and vegetable he serves is impeccable,” says an admiring Jake Dickson. Although Dickson could make more money selling his beef liver as the dog food he grinds and cooks in-house (no need for peeling and trimming, and he could use the entire liver, not just the choice tip), he says, “I much prefer to sell to Takashi.”

It’s a credit to Inoue’s skill that he’s seduced Dickson—not a huge offal fan despite his whole-animal orientation—with his beef heart sashimi, served with a choice of flavored soy sauces. “It’s fantastic, incredibly creative,” raves the butcher. “I never would have thought of that.”

Martin Tessarzik, the Schoharie, New York, farmer who raises the cows whose hearts and livers are destined for Takashi’s West Village kitchen, likewise never dreamed they’d end up as the raw materials for the Escoffier of offal. Tessarzik started out in construction and growing organic hay for livestock feed. Then he bought a few cows to eat leftover crops and feed his family and a few local buyers; the response was so rapturous that he shifted focus and began selling beef under the name Wrighteous Organics. He’s now got a herd of about 160 Angus and Hereford, and sells four per week to Dickson.

Asked what his secret is, Tessarzik credits his organic hay feed and adds modestly, “I just do what I do and everybody tells me to keep doing it. It’s not a scientific, computer-driven project like it is with the big feedlots. I’m strictly by feel, I’m flying by what I know works, what I have available and what I’m capable of.”

Among those who want Tessarzik to stick to his formula is Inoue, who raves about the Wrighteous Organics beef heart and liver: “Apart from being super fresh, it has the perfect texture and sweetness to be served raw.”

Inoue’s unfettered imagination roams beyond the cow, too. In one of his newer concoctions, he takes monkfish liver, a delicacy of high-end sushi and kaiseki restaurants, and bathes it in olive oil with baby whitebait fish, thinly sliced garlic and housemade beef pancetta. The tapas-style dish, surprising in its flavor and texture combinations and utterly delicious, is cooked in a sardine tin, garnished with cilantro and Korean red pepper, and accompanied by a lemon wedge and neatly cubed hunks of baguette to soak up the oil.

It’s not easy to get a steady supply of monkfish livers just pulled from the waters off Long Island. Pura Vida fishmonger Paul Mendelsohn says he can only supply large enough livers during the colder months since in summer the larger fish head to northern waters. To complicate matters further, he adds, “It’s very difficult to actually take the liver out of the monkfish without damaging it.”

Fishermen at sea want to throw back the parts they can’t use to reduce the boat’s weight, which means the fish has to be quickly cleaned and the livers extracted on the boat. “Depending on weather conditions and how much the boat’s pitching they do or don’t cut the liver out,” explains Mendelsohn.

Back at Takashi, the limo-driven Japanese party is on its second bottle of shochu and about to start grilling a platter of ruby-red slices of kalbi, or premium short rib. Hiro Nakamura, who works at the tax and finance-advising firm Deloitte at the World Financial Center, says he loves everything Inoue serves, but is especially fond of the yokke, thinly sliced chuck eye tartare in a soy-bonito-sesame-garlic sauce topped with a raw quail egg yolk and shredded nori. Another favorite, a complete Takashi original that you could never find in Japan (except in the one and only outpost of Takashi that Inoue’s family launched last year in Osaka) is the niku-uni, minced raw chuck flap (a well-marbled muscle with even fat distribution, no gristle-filled connective tissue and great taste) served on leaves of shiso and nori, topped with raw sea urchin and fresh wasabi.

After graduating from the Tsuji Culinary Institute in Osaka and working in high-end Japanese-French restaurants in Osaka, Kyoto and Tokyo for 12 years, Inoue arrived in New York on a student visa. He and his then-boyfriend, Saheem Ali, who was finishing an MFA at Columbia in theatrical directing, decided to open a restaurant. Ali took a year off from the theater to serve as project manager, supervising construction and hiring staff. Both had faith in Inoue’s cooking, but were clueless when it came to opening their own place.

“Quite literally,” says Ali, “my bible was a book called Starting and Running a Restaurant for Dummies.”

Inoue and Ali recall canvassing the city by foot before they opened, visiting butchers who wouldn’t give them the time of day. “It was very difficult,” recalls Inoue. “They didn’t know what first or second stomach were, they were just throwing everything away.” Pat LaFrieda Meat Purveyors, located right around the corner from the restaurant, was the first local butcher to give them a break.

Despite their inexperience, their restaurant was embraced by both the neighborhood and the critics. Though Inoue and Ali have split romantically they remain dedicated business partners: Ali juggles duties as Takashi’s general manager with his budding directorial career, while Inoue is in charge of food and his spunky, sometimes hilarious Japanese-language blog (in one entry describing a visit to the GQ offices for a suit fitting, he jokingly says he expects to meet a “gorgeous boyfriend” there).

At the center of the evolving and improbably successful enterprise, Inoue keeps a weather eye on the changing seasons, and is at his happiest inventing seasonal recipes. “Sometimes new dishes come to me when I dream,” he says. The biggest kick is when he makes them and they taste exactly as he imagined.

Asked in early spring what he was dreaming up, he responded: “Cow’s blood pancake! But I’m waiting for ramp season because it’s going to be cow’s blood and ramp pancakes.” •

Nancy Matsumoto covers food, arts, culture, Japanese-American issues and health. The surge of male energy she felt after eating Takashi’s “testicargot” has since worn off and she is her usual demure self.