Mastering the Art of Soviet Cooking 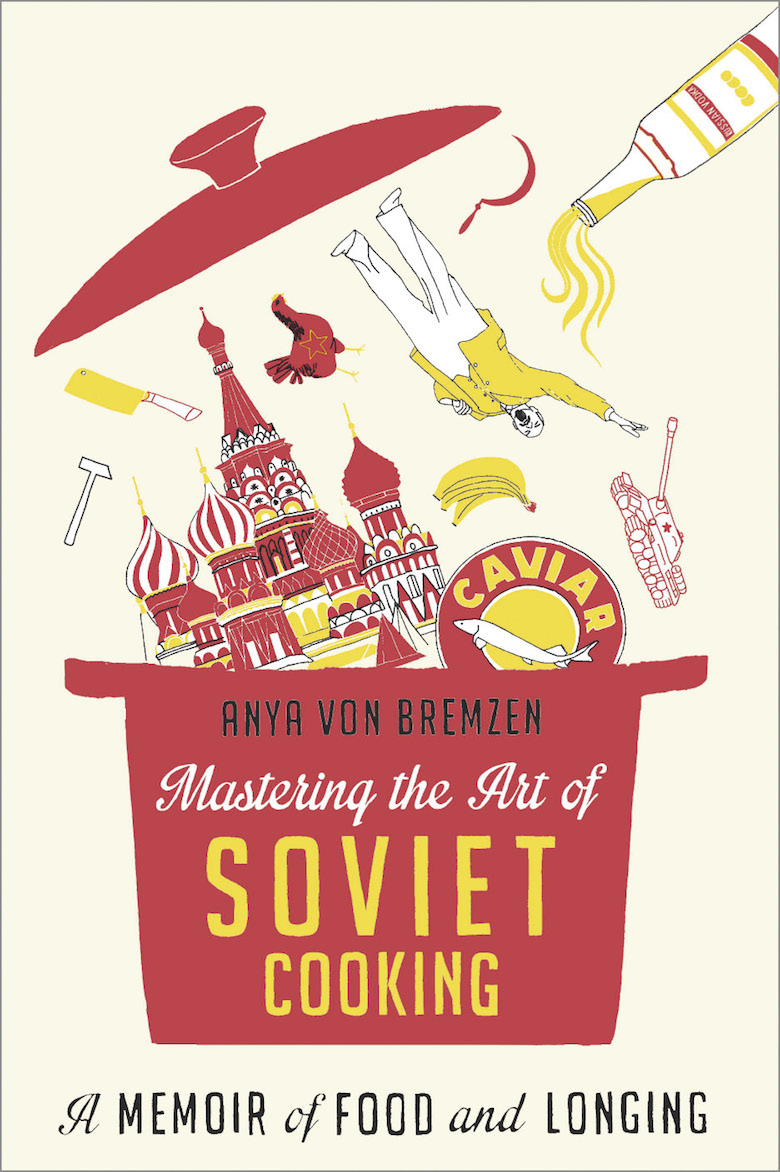 Whenever my mother and I cook together, she tells me her dreams. So rich and intense is Mom’s dream life, she’s given to cataloging and historicizing it: brooding black-and-white visions from her Stalinist childhood; sleek cold war thrillers laced with KGB spooks; melodramas starring duty-crushed lovers.

In a nod, I suppose, to her Iron Curtain past, Mother gets trapped in a lot of her dreams—although now, at 79 years of age and after nearly four American decades, she tends to get trapped in pretty cool places. Deep, for example, in a mazelike, art-filled palace, one much resembling the Metropolitan Museum of Art, where, having retired as a schoolteacher, she works as a docent. In this dream’s Technicolor finale, an orange balloon rescues Mom from her labyrinth and deposits her at the museum’s sumptuous café. Whereupon she gorges on cream puffs.

But it’s one dream of hers from long ago, one I remember her telling me of many times, that’s most emblematic. Here she is, skinny, short-haired, tiptoeing into my bedroom as I awake to the hopeless darkness of a Soviet socialist winter. We’re in our minuscule flat in a shoddy Khrushchev-issue stained-concrete prefab on the outskirts of Moscow. It’s 1968; I am five. Soviet tanks have just rolled into Prague, my dad has abandoned us recently, and we’ve moved here from a Kafkaesque communal apartment near the Kremlin where 18 families shared one kitchen. Mom, in her robe with faded blue cornflowers, sits on my bed, presses a reassuring kiss to my forehead. But in her eyes I see such toska (that peculiarly Russian ache of the soul), such desperate longing, I know right away she’s been visited once more by that dream.

“Listen, listen, Anyuta,” she murmurs. “Yet again I’m transformed into a lastochka (a swallow)…I escape from Russia, flying across the Soviet border, and somehow no one asks me for documents. And suddenly I’m in Paris! In Paris! I circle over the ocher-colored streets, I recognize them from Utrillo paintings. On a tiny rue—it’s called ‘Street of a Cat Who Fishes’—I notice an enchanting café. I speed down to the impossibly colorful awning, I’m dizzy from the delicious smell of the food, everything inside me is aching to taste it, to join the people inside…” At this point my mother always woke up. Always on the wrong side of the entrance. Always ravenous, overwhelmed by yearning for a world beyond the border she was never destined to see. By nostalgia for flavors that would forever elude her.

Mom and I both grew up within a triumphalist, scarlet-blazed fairy tale of socialist abundance and glorious harvests. Our experiences, though, featured no happy kitchens enveloped in an idyllic haze of vanilla, no kindly matriarchs setting golden holiday roasts on the table. Tea cakes rich in bourgeois butter? I do have such a memory . . . It’s of Mom reading Proust aloud in our Khrushchevian slum; me utterly bored by the Frenchman’s sensory reveries but besotted with the idea of the real, edible cookie. What did it taste like, that exotic capitalist madeleine? I desperately wanted to know.

Inevitably, a story about Soviet food is a chronicle of longing, of unrequited desire. So what happens when some of your most intense culinary memories involve foods you hadn’t actually tasted? Memories of imaginings, of received histories; feverish collective yearning produced by 70 years of geopolitical isolation and scarcity…

Until recently I didn’t talk about such memories much. Asked why I write about food, I’d just rattle off my well-rehearsed story. How my mother and I emigrated from Moscow without my father in 1974—stateless refugees with no winter coats and no right of return. How, after I graduated from Juilliard, my piano career was cut short in the late ’80s by a wrist injury. And how, searching for a new start, I fell into food, almost by accident, really. And I never looked back. Following my first cookbook, Please to the Table, about the cuisines of the former USSR, nice things kept happening: exciting magazine stories, more cookbooks, awards, almost two decades of travel and memorable meals.

Here’s what I rarely mentioned: scribbled skull-and-bones warnings affixed to pots in my grandmother’s communal apartment kitchen, where comrade residents pilfered one another’s soup meat. The afternoons of me desperately gagging on caviar at my kindergarten for the offspring of the Central Committee—gagging because along with the elite Party fish eggs I felt I was ingesting the very ideology my anti-Soviet mom couldn’t stomach. Nor did I mention the girls’ bathroom at School 110, where I, a nine-year-old fledgling black marketeer in a scratchy brown uniform, charged my Soviet classmates five kopeks to touch the bottle of Coca-Cola that friends had brought us from the mythical zagranitsa (abroad). Nor my present-day impulse to steal every last croissant from the splendid free breakfast buffets at the lovely hotels where I often stay for my work.

I inhabit two parallel food universes: one where degustation menus at Per Se are routine; the other where a simple banana—a once a year treat back in the USSR—still holds sway over my psyche.

Ultimately, the stories I’ve kept to myself are why I really write about food. But they aren’t just my stories. For any ex-citizen of a three-hundred-million-strong Soviet superpower, food is never a mere individual matter. In 1917 bread riots sparked the overthrow of the czar, and, 74 years later, catastrophic food shortages helped push Gorbachev’s floundering empire into the dustbin. In between, seven million people perished from hunger during Stalin’s collectivization; four million more starved to death during Hitler’s war. Even in calmer times, under Khrushchev and Brezhnev, the daily drama of putting a meal on the table trumped most other concerns. Across 11 time zones the collective socialist fate of standing in food lines united comrades from the Union’s 15 ethnic republics. Food was an abiding theme of Soviet political history, permeating every nook and cranny of our collective unconscious. Food brought us together in obsessive Soviet hospitality rituals—more herring, more doctor’s kolbasa—and in our shared envy and spite for the privileged few, the grifters and Party hacks with their access to better kolbasa (sausage). Food anchored the domestic realities of our totalitarian state, supplying a shimmer of desire to a life that was mostly drab, sometimes absurdly comical, on occasion unbearably tragic, but just as often naïvely optimistic and joyous. Food, as one academic has noted, defined how Russians endured the present, imagined the future and connected to their past.

That past is now gone. Vanished after the Soviet Union’s collapse. In place of our “Socialist Homeland” there are cultural ruins, a vast archaeological site of a Soviet Atlantis. But we’re not ready to let go of this rubble. Toppled headless statues of leaders, songbooks and candy wrappers, once-scarlet Young Pioneer scarves, triangular Soviet milk cartons blackened with grime—we cling to these fragments. Unlike the melancholy ruins that fueled the Romantics’ nostalgia for an idealized past, ours are pieces of our physical homes, of the lives we once lived. For us they’re still freighted with meaning: historical, political, personal. And almost always ambiguous.

I started my own collection of socialist fragments in 1974, weeks into our Philadelphia life. Mom instantly fell for Amerika. Me? Huddled on our bony refugee sofa I read Chekhov’s Three Sisters and whimpered along with the characters: “To Moscow . . . to Moscow.” My childhood fantasies of capitalist delicacies crashed against our first meal at the Robin Hood Diner. I choked on the cloying fluff of American coleslaw, stared in shock at the Day-Glo that is Velveeta. At home, while my mother gleefully slapped Oscar Mayer bologna onto alien Wonder Bread, I pined for the fragrant bricks of Moscow sourdough rye and the stale reek of cheapo Krakovskaya kolbasa. I’m pretty sure I’d lost my sense of taste those first Philadelphia months. Because depleted of political pathos, hospitality, that heroic aura of scarcity, food didn’t seem much of anything anymore.

Like a raggedy orphan, I paced our apartment, repeating to myself our sardonic Soviet defitsit (shortage) jokes. “Would you slice one hundred grams of kolbasa?” asks a man in a store. “Bring the kolbasa and we’ll slice,” answers the salesgirl. Or “Why are you emigrating?” “Coz I’m sick of celebrations,” says the Jew. “Bought toilet paper—celebration; bought kolbasa—more celebrating.”

In Philadelphia, no one celebrated Oscar Mayer bologna.

To revive my taste buds I began playing a game in my head. Picturing myself at a dacha (country cottage) surrounded by prickly gooseberry shrubs, I’d mentally preserve and pickle the tastes and smells of my Soviet socialist past in an imaginary three-liter jar of memory. In went the Order of Lenin Red October chocolate bars with a mirthful kid on the wrapper. In went the scarlet-wrapped Bolshevik Factory Jubilee Biscuits, the ones that dissolved so poignantly when dipped in tea from a yellow packet adorned with an elephant. In my mind’s eye I unwrapped the foil from the squishy triangles of Friendship Cheese. Paused to dig an imaginary aluminum fork into the industrial breading of the six-kopek meat patties named after Stalin’s food supply commissar.

There was, however, an ideological cloud darkening my nostalgia exercise. The Friendship Cheese, the kolbasa, the chocolates—all were produced by the reviled Party-state we’d fled. Recalling Mom’s Proust recitations, I’ve come up with a phrase to describe them. Poisoned madeleines.

This is my “poisoned madeleine” memoir. It was my mother, my frequent coconspirator in the kitchen and my conduit to our past, who suggested the means to convey this epic disjunction, this unruly collision of collectivist myths and personal antimyths. We would reconstruct every decade of Soviet history—from the prequel 1910s to the postscript present day—through the prism of food. Together, we’d embark on a yearlong journey unlike any other: eating and cooking our way through decade after decade of Soviet life, using her kitchen and dining room as a time machine and an incubator of memories. Memories of wartime rationing cards and grotesque shared kitchens in communal apartments. Of Lenin’s bloody grain requisitioning and Stalin’s table manners. Of Khrushchev’s kitchen debates and Gorbachev’s disastrous antialcohol policies. Of food as the focal point of our everyday lives, and—despite all the deprivations and shortages—of compulsive hospitality and poignant, improbable feasts.