Mama’s Too, the Neighborhood Slice Shop with Innovative Energy 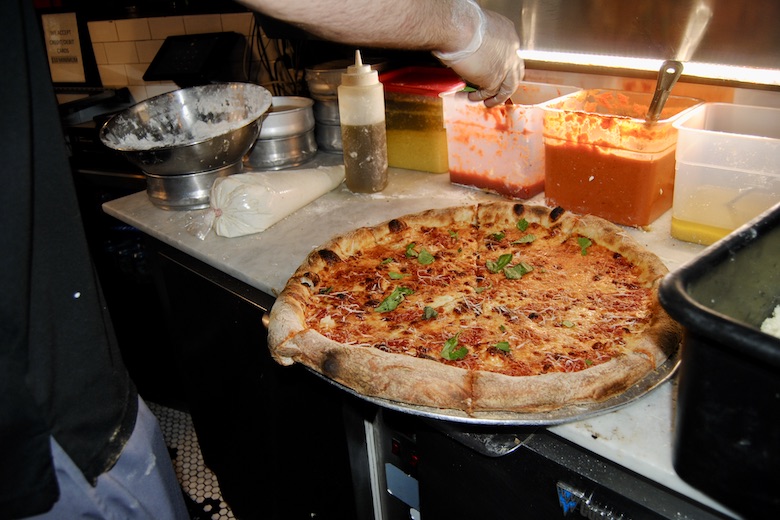 A look at what makes Mama’s Too so different. Photos by the author.

The stretch of Broadway between Zabar’s and Columbia University isn’t often bustling with those who don’t live in the area. Then came Mama’s Too. On the outside (and inside), it’s a Manhattan slice shop: red chairs, tiled floors, photo of a young Robert De Niro eating pizza hung on the wall. But peer over to the display case, and you’ll pause. There’s something else going on here.

Most of the pies are square, with a deeply caramelized crust. Shimmering pepperoni cups, handfuls of fresh basil. Cross sectionally, there’s an open crumb structure that makes you want to tear off a piece. But Mama’s Too doesn’t make Detroit- or Sicilian-style pizza. The round pizzas have a hefty crust, too, with leopard-spot blips of char around the surface. But they don’t make Neapolitan-style pizza. It’s not New York Style either, really. 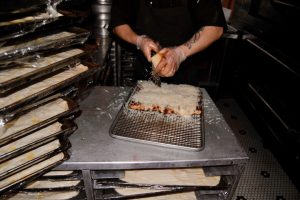 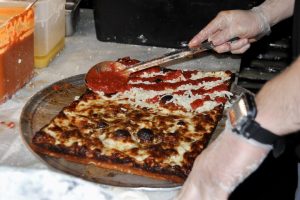 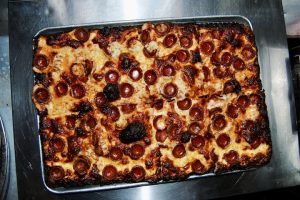 “Everything you see here is totally my take,” Frank Tuttolomondo, the owner of Mama’s Too, told me one evening at the shop. “It’s a very different kind of slice… for the most part, we have our own pizza. We don’t have a name for it.”

Pizza is a family business for Tuttolomondo, whose grandmother opened the nearby Mama’s Pizza in 1959. “That’s where I learned the actual business, the fundamentals of dough making, running a pizzeria,” explained Tuttolomondo, who took over in 2009. The original Mama’s still churns out slices, as well as pastas, calzones, and desserts. It took almost a decade for Tuttolomondo to open his own place (in December 2017), where he knew he was willing to break the rules. “This is basically just everything I like about pizza. That’s one of the reasons why I think people recognize us for what we are, because we don’t really adhere to any one style of pizza. It’s really just Mama’s Too.” 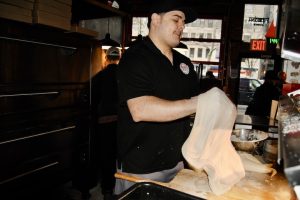 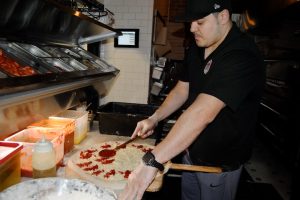 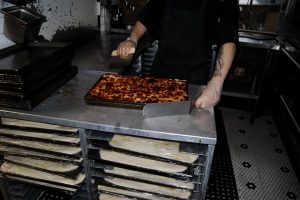 It’s this touch of enlightened self-interest that explains the near-constant line at the shop, which often spills out onto the sidewalk. It’s why you’ll see orange oil-stained napkins tucked into the shirts of people sitting on benches near 105th and 106th streets, why those “roni cups” are all over the Instagram feeds of your favorite food writers and food media paraprofessionals, not to mention publishers’.

Mama’s Too’s popularity started on social media, with those glistening rings of (hand-sliced) pepperoni, Tuttolomondo assesses. In March of 2018, they appeared on an Eater map, then the pepperoni was deemed the second best square slice in New York by Grub Street.

“I’d written about a lot of ‘pizza guys,’… but this was interesting to me because it seemed like a pure New York pizzeria,” Pete Wells, restaurant critic for the New York Times, told me. “Slice pizza—it’s a little hard to define, but we all know what it is—is a New York thing… There aren’t a lot of authority figures telling people how it’s done. I think the first time I went [to Mama’s Too], I was alone and sat at the window. By the time I left I thought, This is something new and different.” 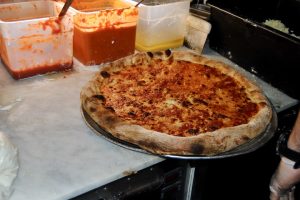 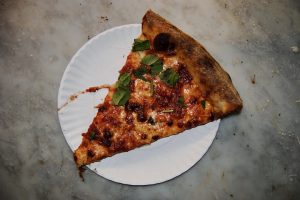 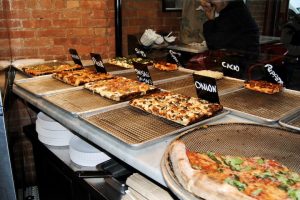 Wells reviewed Mama’s Too and gave it one star (the first slice shop to receive a star from the paper of record). He describes hearing about the restaurant from pizza connoisseurs Ed Levine and Adam Kuban. “The pizzas I’d always venerated were the brick-oven ones… I ate a lot of [slice] pizza when I was younger, and then I just stopped thinking about it.” But then, Wells noticed that some were reconsidering the slice, like Best Pizza’s Frank Pinello. One could also consider Scarr’s Pizza, where local wheat is freshly milled daily, and Paulie Gee’s Slice Shop, that coats the bottom of their square pies with sesame seeds, in this camp. “What [Tuttolomondo] and a few other people are doing, it was like pizza news. And we’re a newspaper.”

When they opened, Mama’s Too had pasta and salad on the menu; they fell to second priority when they realized how special their customers found the pizza. Still, Tuttolomondo couldn’t resist his own inspiration; the candied walnut, pear, and Gorgonzola salad became the poached pear square slice: “I liked the way that the Gorgonzola melted, the poached pears get a good spicy cinnamon, we put our homemade hot honey over the top… that all marries together with a sweet and salty balance that people crave.” Though poached pear isn’t a typical flavor at a pizzeria, Tuttolomondo maintains it sells just as well as the others, as do his other nontraditional slices. Usually, there’s a cacio e pepe pie, but he’ll also make specials (announced on Instagram) like an elote-inspired pie, or an ode to the bacon, egg and cheese. “Sometimes, two separate lines will form if people are waiting for the fennel-sausage or the pepperoni, but usually they’ll get whatever’s at the counter.”

Even with the popularity of the wackier-flavored slices, Tuttolomondo doesn’t seem too interested in growing the menu, or the business, too quickly. “We’re only going to be just a pizzeria. We’re not going to be anything more.” Still, when it comes to chefs like Tuttolomondo, inspiration won’t be denied: Just before the New Year, he posted a photo to Instagram of a sandwich piled high with sopressata, mozzarella, basil, and a peppery condiment with the simple caption, “stay tuned.”