Everything is harvested to order and delivered to the restaurant. 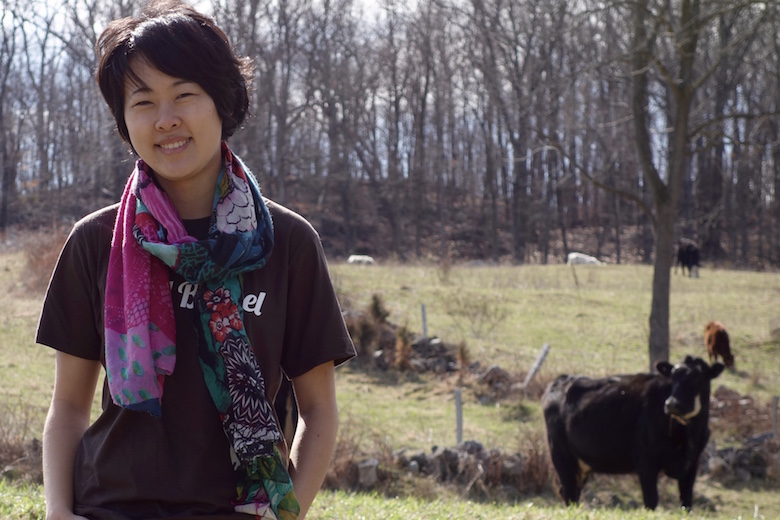 Editor’s note: In anticipation of our upcoming Food Loves Tech event, we’ve launched a regular column to explore new and intriguing trends in food and drink. Read more about and get your tickets to Food Loves Tech here.

One morning at Union Square Greenmarket, Yusha Hu saw something that many of us have probably seen before: Two people in baggy pants and kitchen clogs leaving the market and getting on the subway with ten of pounds of fresh produce in each arm. They’re hauling boxes on a trolley, they’re wearing work gloves—doing everything they can to imitate the efficiency of a pack mule as they lug their seasonal bounty back to home base in some tiny kitchen in Lower Manhattan.

“That can’t be the best solution,” thought Hu. But delivery services were not reliable and the prices were high.

Hu made that observation in April of 2014 and soon after, Local Bushel was born with Hu as the CEO. “If we could get on par with commercial distribution in terms of convenience, then the farmer could get a fair price and the customer could get a fresh harvested to order experience,” said Hu of her initial brainstorm.

It’s a seemingly simple idea: farmers list what they have, chefs order it and Local Bushel delivers. Chefs must get their orders in by 11:00 a.m. two days before, because everything is harvested to order and delivered the following morning.

But it’s that last part that makes this company worth noting. Online marketplaces that connect buyers and sellers for anything and everything are pretty easy to set up. Distribution is the hard part. Trucking perishable product into New York City in an efficient and timely manner is an art and a science, and remains the most challenging piece of Local Bushel’s work, though Hu says she will never consider the company a distributor in the traditional sense.

“We don’t actually see ourselves as a distributor. We’re just getting things from point A to point B. Everything is listed by farm—we are totally transparent—things often have the farm’s own labelling on it and if we ever need to do a substitution we let the chef know.”

View from the farm

To recruit farms, Local Bushel went back to the market. “It’s incredibly hard to get into Union Square Greenmarket. The waiting list is as long as the market itself, she says, so supply has been relatively easy to come by. Plus, Yusha says that most of her farms were not already distributing in New York City so they jumped at the chance. Local Bushel now works with 60 different farms.

“Our system fits in pretty well with how farmers work today. Farmers are harvesting every day whether I send them an order or not. Sometimes your window for harvesting is like six hours.”

Rockridge Farms in Andover, New Jersey is one such farm that saw Local Bushel’s proposition as a no-brainer. Joe VanDeMoere, who runs the 600-acre operation, says that they had to double their stock of egg laying chickens in order to keep up with the demand for their pastured eggs when they started selling through the platform.

Two years ago when VanDeMoere and Hu started working together, Rockridge had a roadside farmstand and 300 egg-laying birds. Now the farm has 1,700 birds and VanDeMoere says that half of that is going to Local Bushel’s customers. The farm grows corn and hay and also sells black angus beef cattle, berkshire pork (they drink raw milk) and cornish rock broiler chickens. They didn’t intend to make most of their sales in eggs, but they’re not complaining.

“I didn’t expect to be a chicken farmer, but there you go…” said VanDeMoere.

Hu wants her company to have more of an impact than simply lightening the load of New York’s chefs. She says she started the company to impact climate change. The easier it is for chefs to source locally and sustainably, the less chefs will rely on large scale commercial farms that can have significant environmental concerns including pesticide use and soil degradation.

Local Bushel works with several restaurants with local sourcing in their ethos including Colonie, Bespoke Kitchen and Home Restaurant. but in many ways, their target customer isn’t the bold-faced name chef who will have a forager on staff; it’s the thousands of restaurants in New York City that would happily source locally, as long as it was just as easy and competitively priced.

Hu says, “Most of our customers are not farm to table restaurants and weren’t previously sourcing locally because it was too hard to do.”

Now Local Bushel has more than 100 food service operations purchasing on their platform.

“What’s really compelling is that our customers tend to increase their order size significantly over time. A chef will often try out a product and start dabbling and then expand into other products,” says Hu.

As long as they can manage scaling a complicated distribution operation, Local Bushel is poised to be a win-win for farmers, chefs and New York diners.