The Unique Journey That Brought Us Little Tong 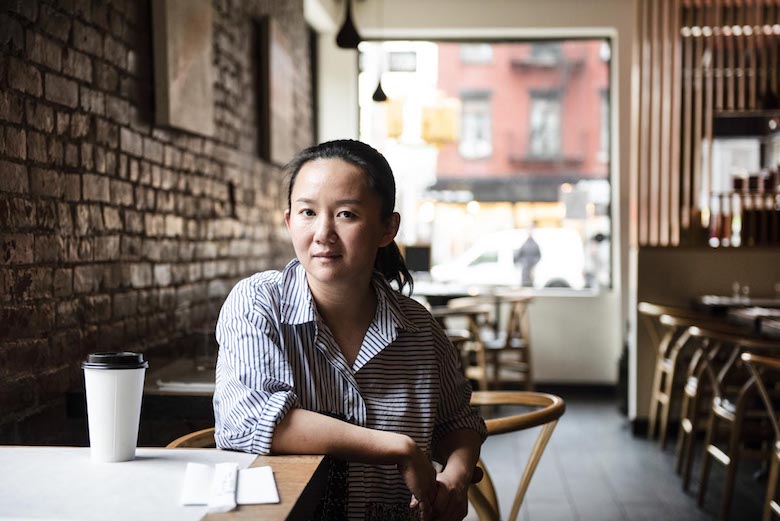 Mixian—literally, “rice threads”—is to southern Chinese what pho is to northern Vietnamese, beef noodle soup is to Taiwanese and tonkotsu ramen is to southern Japanese: a beloved, deeply gratifying taste of home. Yet until Simone Tong showed up, many New Yorkers had never heard of mixian. Since opening Little Tong, her cozy East Village restaurant, in 2017, her springy mixian soups, stir-fries and bowls have become the stuff of legend among food critics and regulars alike. 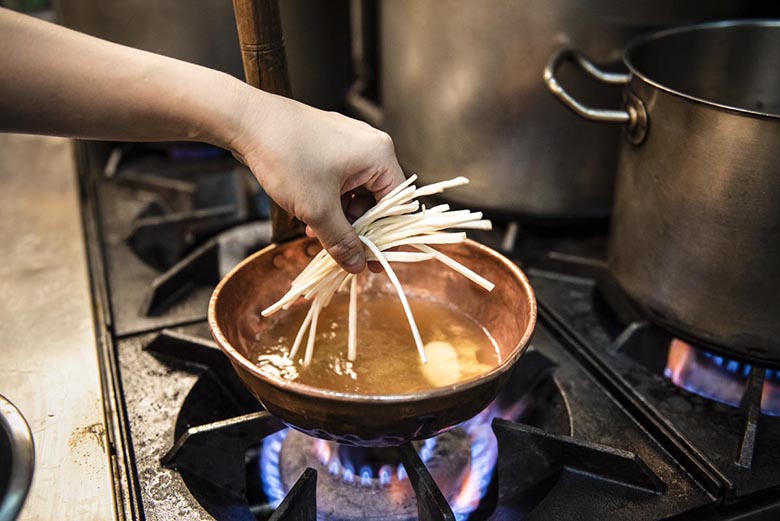 Mixian—literally, “rice threads”—is to southern Chinese what pho is to northern Vietnamese, beef noodle soup is to Taiwanese and tonkotsu ramen is to southern Japanese: a beloved, deeply gratifying taste of home.

A testament to Tong’s cooking (and to mixian’s addictiveness), last July, she launched a second Little Tong in Midtown. And this spring, she will open Silver Apricot, a West Village restaurant that will offer a more experimental and higher-end Chinese menu. 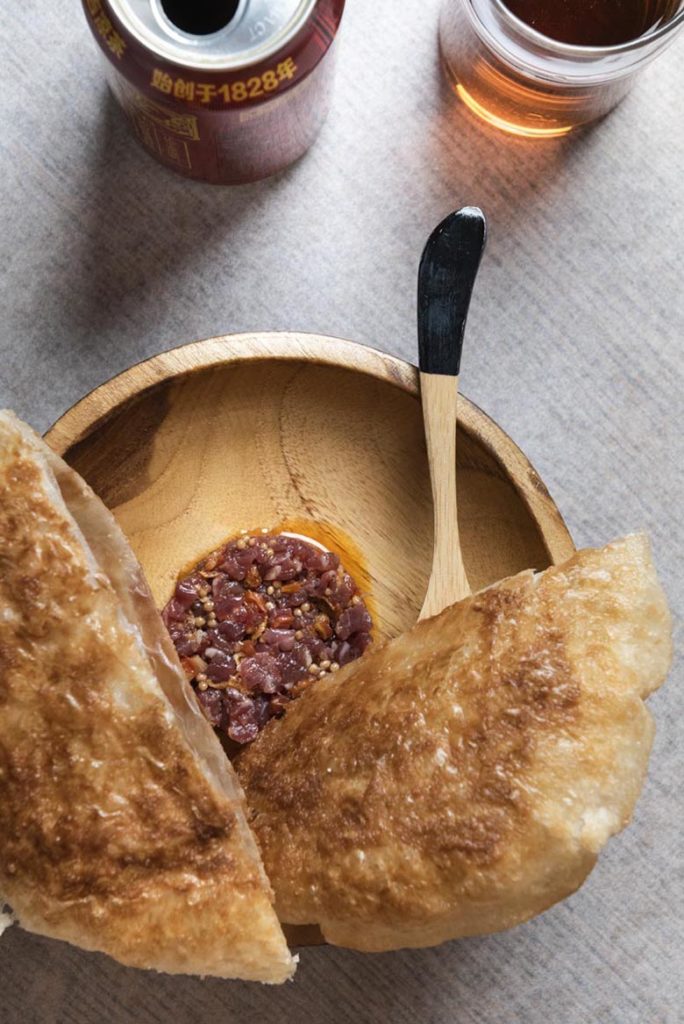 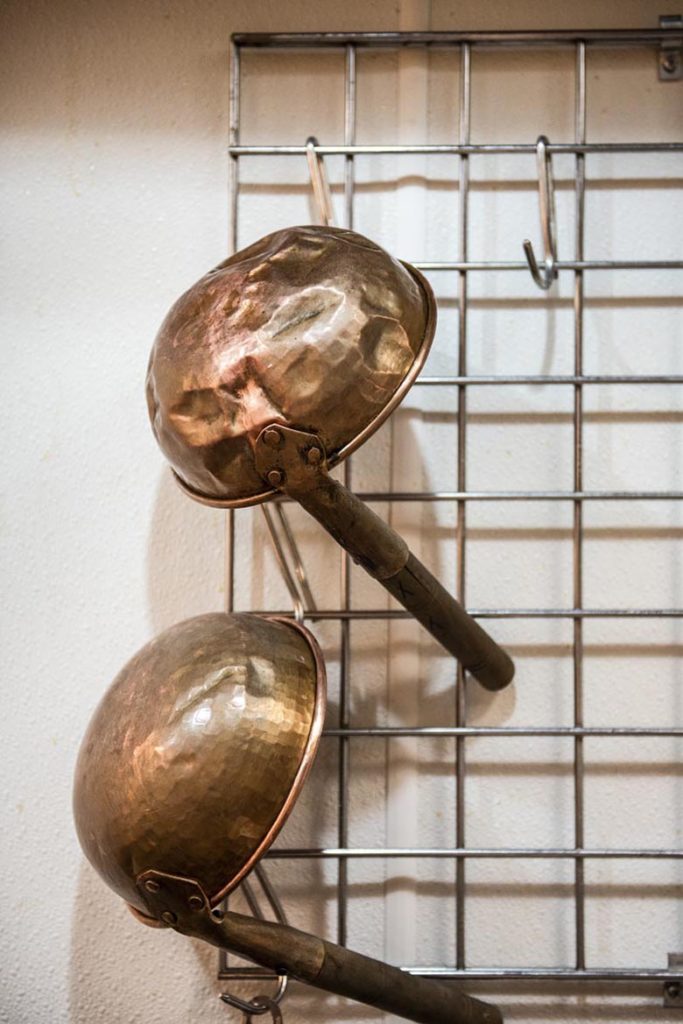 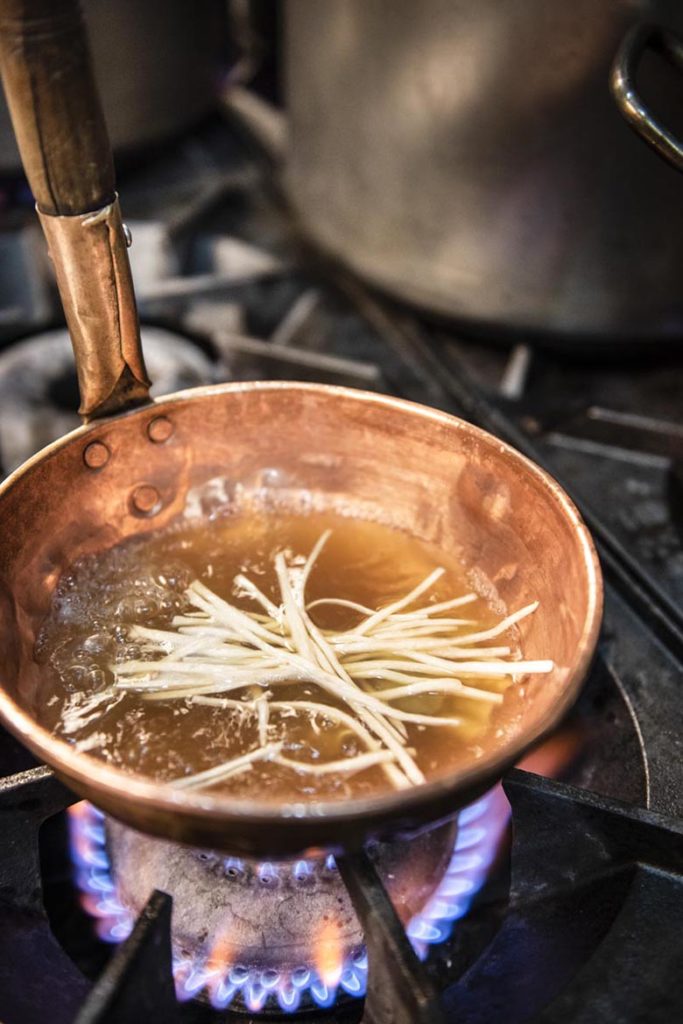 Tong, 36, is clearly doing something right. But her path to celebrated chef—the details of which she shares with the f-bomb embellished enthusiasm of a long-lost best friend—is so chock full of wildly varied left turns as to sound almost made up. It’s from those unexpected life experiences that she gained the grit, cultural insight and culinary diversity necessary to launch herself among the top of the New York restaurant scene.

Tong was born in Chengdu, but her parents, seeking better opportunities, soon moved the family to Macau. Tong bounced around schools, never staying long enough to make friends and sometimes severely bullied as an outsider. When Tong was 11, the government of Singapore invited her parents, who organized art exhibitions and auctions, to move to the tiny Southeast Asian nation, considered at the time to be an art desert. Tong perfected her English there and at yet another school in Melbourne, and aspired to become a surgeon, architect or scientist. “Whatever was the most challenging, I wanted to do,” she says. 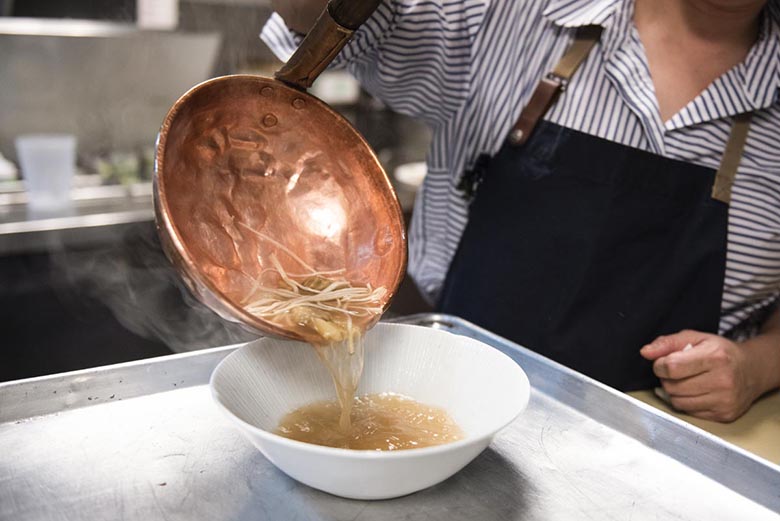 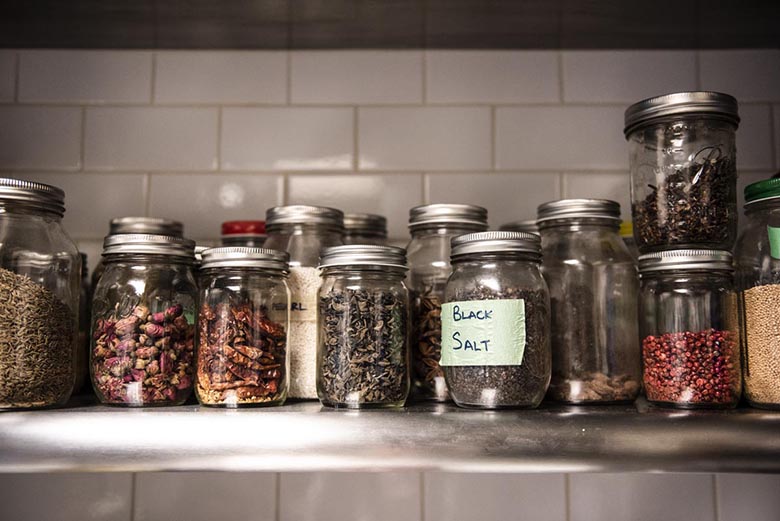 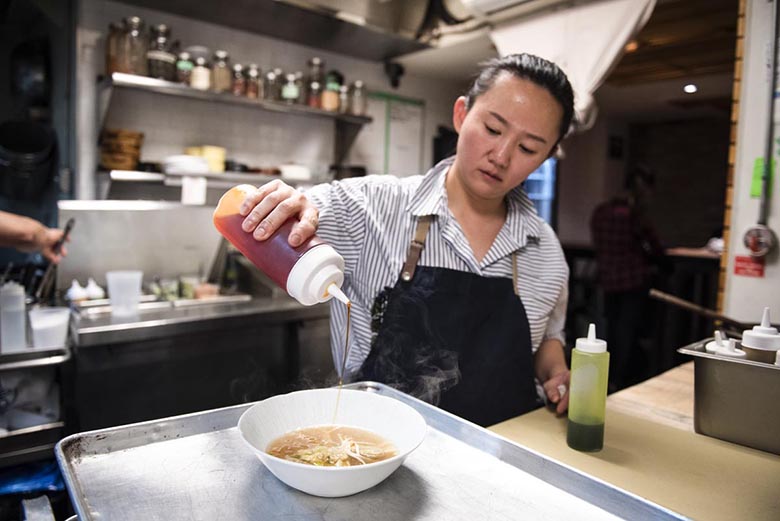 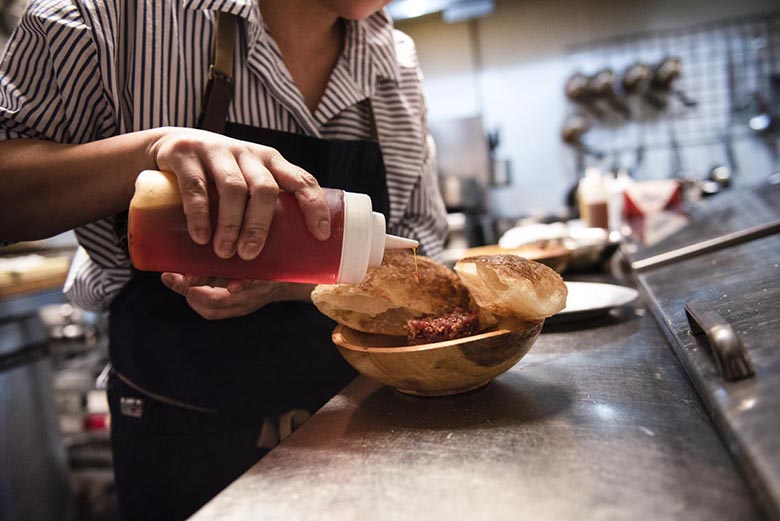 Though cooking was not yet on her radar, Tong loved to eat and had always taken for granted a glut of good food: the famed spicy pots of her native Sichuan, the Portuguese-African-Chinese fusion of Macau, the sprawling food halls of Singapore and the farm-to-table cafés of Australia. But that all came to a stomach-churning halt when she enrolled at the University of North Carolina at Chapel Hill. “The food tasted so bad, I immediately lost 10 pounds,” she says. As she integrated cinnamon buns, donuts, pasta, pizza, fried chicken, waffles, Frappuccinos and cloying American-Chinese food into her diet she gained back another 20 pounds, and out of necessity, she began learning her way around the kitchen.

“I started to cook for everyone in my dorm, stir-frying shit, making noodles with my own sauces and pickles—everyone loved it,” Tong says. “I realized the joy of feeding people.” 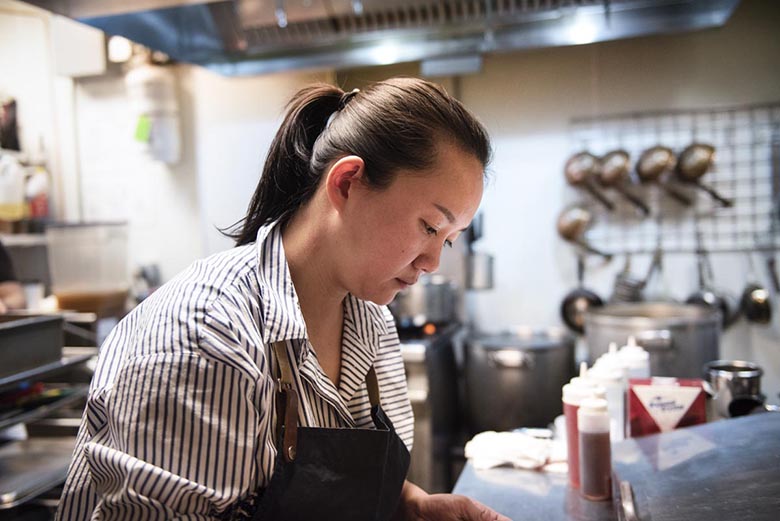 A testament to Tong’s cooking, she launched a second Little Tong in Midtown. This spring, she will open Silver Apricot, a West Village restaurant offering a more experimental and higher-end Chinese menu.

Yet Tong was still years away from realizing her professional calling as a chef. After graduating, she moved back to Chengdu and opened an English language school, which she eventually got bored of and sold to a friend. She got a job with Louis Vuitton and began putting her psychology and economics double-major to use playing online poker on the side. She excelled and used her winnings to travel to Las Vegas, where she took breaks in between games at Nobu and Jean-Georges. Yet despite the glamour and money, she felt unfulfilled.

It was then, finally, that her eureka moment struck—in the form of After Hours with Daniel. Inspired by the camaraderie and cooking she saw on the famous chef’s show, she decided to become a chef herself. Her parents, however, were less than enthusiastic. “You’re crazy: you’re a girl, you’re Asian and we don’t have three generations of chefs in our family!” they told Tong. “We’re not financing you.” 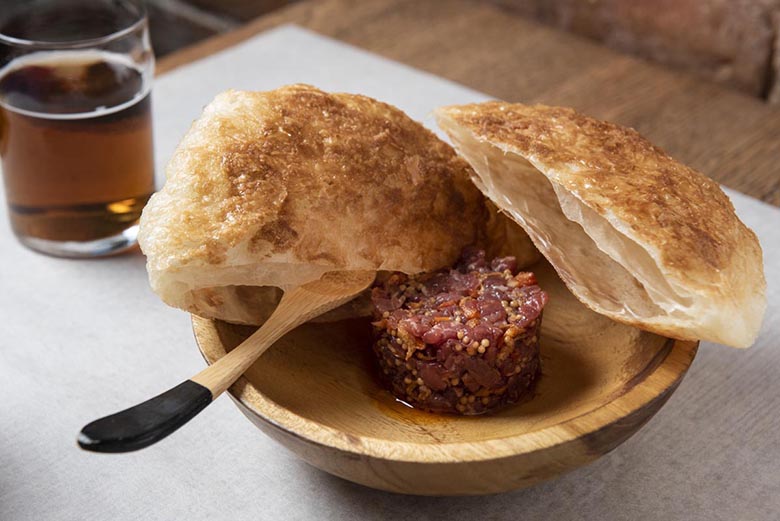 Little Tong’s menu is an homage to Tong’s experiences and creativity. In addition to half a dozen mixians, Tong whips up eight appetizer-portioned delicacies, and her tingling beef tartare stands heads above those on other city menus.

Undeterred, Tong sent cover letters to 50 restaurants spanning Asia and Europe. She heard back from just one in Singapore and moved there to work and enroll in culinary school. At the end of her program she landed a dream internship at Wd~50 (she had seen chef Wylie Dufresne on an episode of After Hours and fancied him to be “this crazy Willy Wonka of food”). For four years, she worked so hard she barely saw daylight. She eventually moved to Dufresne’s second restaurant, Alder, and then to 15 East, where she learned the art of sushi. Meanwhile, she fell in love with New York City, “the only place that I don’t feel like a foreigner, that I feel I belong,” she says.

Still, Tong longed for something to call her own. “No matter how good Japanese, French or Italian cuisine is, it’s still not my cuisine,” she says. Even in New York, she felt that certain Chinese regional flavors—including mixian—remained underrepresented and unknown. She decided she would change that, but first, she traveled to Yunnan Province to find inspiration. She spent time with a few of the region’s 26 ethnic groups, feeling that with each stop she entered a different micro-country offering a whole new cuisine. She sampled edible flowers, insects, moss, tree ferns, lake weed and home-brewed wine. She helped friendly locals make cheese from fresh cow’s milk and, after drying it in the sun, ate it with homemade rose jam, and she joined lifelong foragers as they collected bushels of Yunnan’s 300-plus types of edible mushrooms. She ate mixian galore and gathered fodder for recipes. 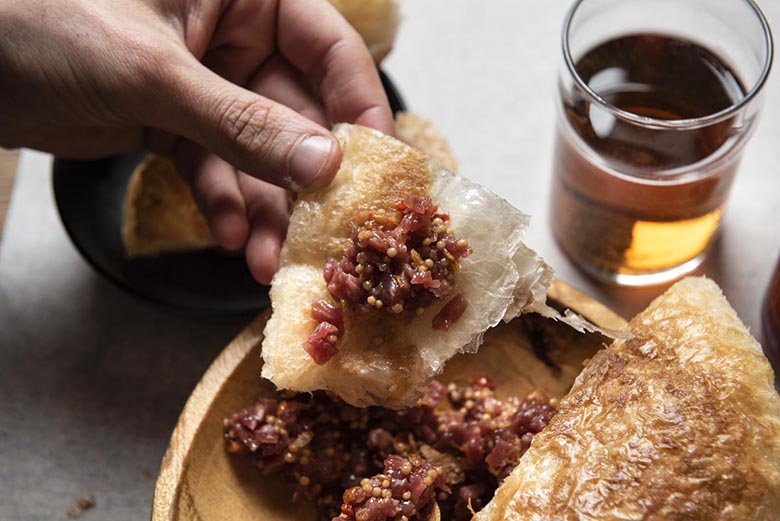 Following culinary school in Singapore, Tong landed a dream internship at Wd~50 and fell in love with New York City. Here she felt that certain Chinese regional flavors remained underrepresented and unknown, and she decided she would change that.

Little Tong’s menu is an homage to those experiences—and to Tong’s own creativity. In addition to half a dozen mixians, which can be further adorned with sides ranging from decadent tea eggs to seared wild baby scallops, Tong whips up eight appetizer-portioned delicacies, all a steal at takeout-like prices. Her tingling beef tartare, infused with a creamy-smoky profile courtesy of smoked egg yolk and served with a paper-thin flaky scallion pancake, stands heads above the tired mustard and balsamic vinegar–drenched varieties found on other city menus, and her pea shoots, which she intermingles with dry-aged duck breast, crisp garlic, miso and housemade XO sauce, are so resplendently green and fresh as to have seemingly been plucked minutes before from a mountainside plot in Yunnan.

As Tong says, “I wanted to share this region’s story with New Yorkers, so they have a different perspective on China, a more romantic story about China.” In that she has succeeded fantastically.

Little Tong made our roundup of restaurants where you should celebrate the Lunar New Year. Read more about their specials here.