A Celebration of Oil: Where and How to Celebrate Hanukkah in New York City

Sweet or savory, oily or schmaltzy, enjoy the week of Hanukkah to reflect on the miracle of oil, especially when added to potatoes. 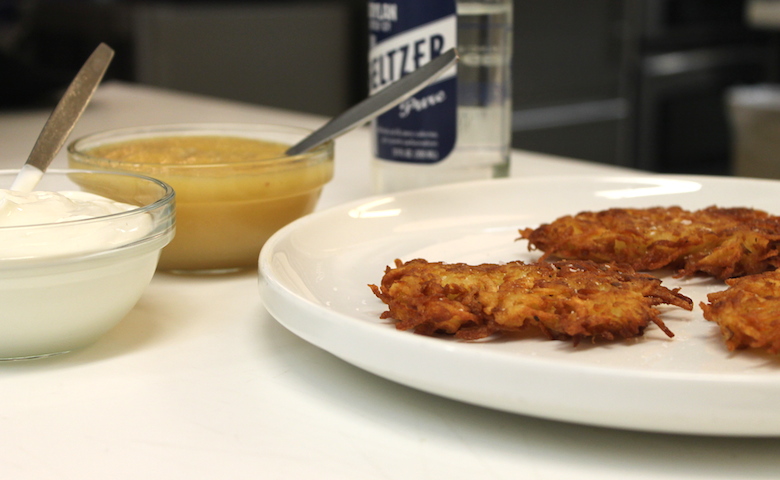 Hanukkah may be the festival of lights, but it’s no secret that latkes are heavy. Hot, crispy, oily and often topped with sour cream or applesauce, the potato pancake served throughout the week is a highlight on the Jewish culinary calendar.

While the traditional version consists of little more than shredded potatoes, onions, egg and oil, modern renditions have swapped potatoes for other root vegetables such as beets and celeriac and incorporated nontraditional ingredients like scallions and kimchi. Luckily, there are eight days of Hanukkah to try them all.

While not mentioned in any Jewish scripture, Hanukkah and its foods play a major role in many Jewish cookbooks. Besides being a pretty good excuse to wage war on your cholesterol, there is historical symbolism surrounding the oil that is used to fry latkes, doughnuts and other Hanukkah delicacies.

The story of Hanukkah goes that after improbably winning a war against a cruel and oppressive Syrian-Greek regime in the 2nd century BC, the Jews went to Jerusalem to reclaim their Temple. Upon finding a menorah (or candelabra) to light in honor of the re-dedication of the Temple, they discovered they only had enough (olive) oil to keep it lit for one day. Miraculously, the light burned for eight days, symbolizing yet another act of divine providence. So, we eat latkes and doughnuts fried in oil to celebrate the miracle of the light that burned for seven days longer than it should have.

There are many ways to indulge in the celebration that begins on the evening of December 16 and lasts until sundown on December 24. Here are a few ideas:

Sweet or savory, oily or schmaltzy, enjoy the week of Hanukkah to reflect on the miracle of oil, especially when added to potatoes.