We recently sat down with artist Jen Monroe to discuss her inspiration for the series and her dinner dedicated to the color red. 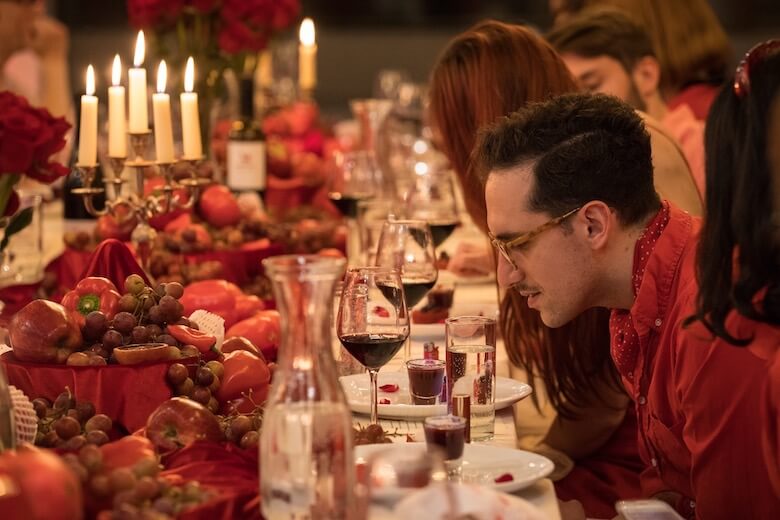 Dressed in a pressed, scarlet chef’s coat, artist Jen Monroe rhythmically tapped a knife against a glass of red wine in welcoming her 20 red-clad diners. Her final performative monochromatic meal in a series of four went out with a bang earlier, taking place over two days at the end of April in the cavernous Bond Collective in FiDi.

Why, you ask? “I’ve always been excited to work with food as a medium because it’s so confrontational and tactile,” Jen later said. “My intention for the series of color meals, as a whole, is a consideration of food aestheticization, which isn’t a new phenomenon, but one that has changed dramatically with social media.”

Jen’s meals do achieve an overwhelming decadence and each provocative and campy performance reveals something painfully beautiful and honest about the act of eating. I recently sat down with her to discuss her inspiration for the series, artistic mission and the future of her moving single-color meals. 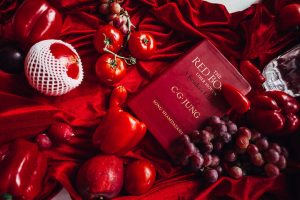 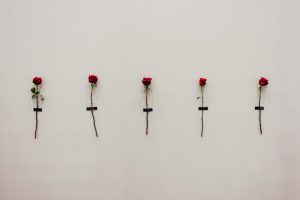 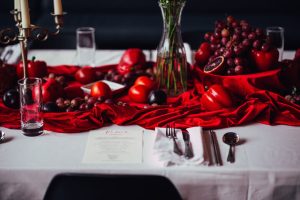 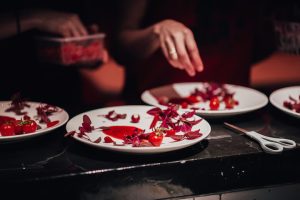 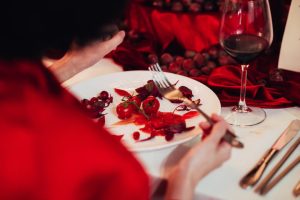 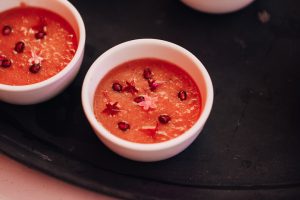 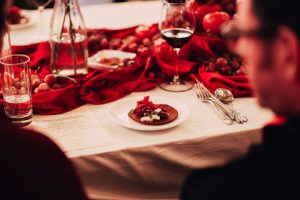 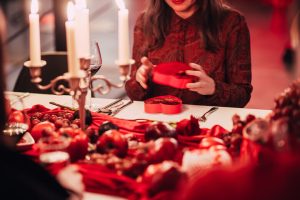 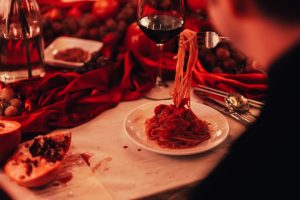 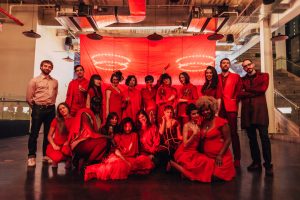 Edible Manhattan: How did the monochromatic meals start?
Jen Monroe: The color meals started as something my sister and I were doing out of our apartment for fun for our friends, but as the project has grown and shifted to ticketed events, they’ve become very much an experiment in sensory immersion and a way to play with what colors “say,” and what they can do.

I’ve always been excited to work with food as a medium because it’s so confrontational and tactile. My intention for the series of color meals, as a whole, is a consideration of food aestheticization, which isn’t a new phenomenon, but one that has changed dramatically with social media. Defining yourself using food as aesthetic objects has become much more common and more nuanced in the past few years, whether it’s to say that you’re a health-conscious (pictures of your daily riff on a chia smoothie bowl), you’re all about hygge (gingham filter picture of a latte with heart shaped foam), or that you have a lot of money (painstakingly documented photos of a tasting menu at Noma).

I wanted to push food-as-aesthetic to its extreme with ten course monochromatic tasting menus. It’s not meant to be taken totally seriously; at the end of the day, it’s pretty absurd, and even a little dystopic. At the same time, I’ve always tried to be sensitive to the fact that having access to food in this capacity, being able not just to eat it but to play with it, is an enormous privilege. My hope with the monochromatic meals is that I can also use it to draw attention to itself, i.e. what consumption means right now.

EM: What is the process behind designing and executing a color meal?
JM: I usually get started by thinking about how I’d like to present a color, how I’d like the whole experience to feel. From there, I make a list of all the foods I can think of in that color. I stare at the list for awhile, and the menu sort of sorts itself out on its own from there.

For red meal, I was thinking about red’s historical association with love and death, Eros and death drive. I wanted to lean into the romantic aspect of it, so I knew I wanted the whole experience to feel like a painting. I designed the table to look like a still-life, draped in red velvet and covered with 60 pounds of produce: grapes, pomegranates, apples, peppers, blood oranges and plums, plus candelabra and a ton of roses. 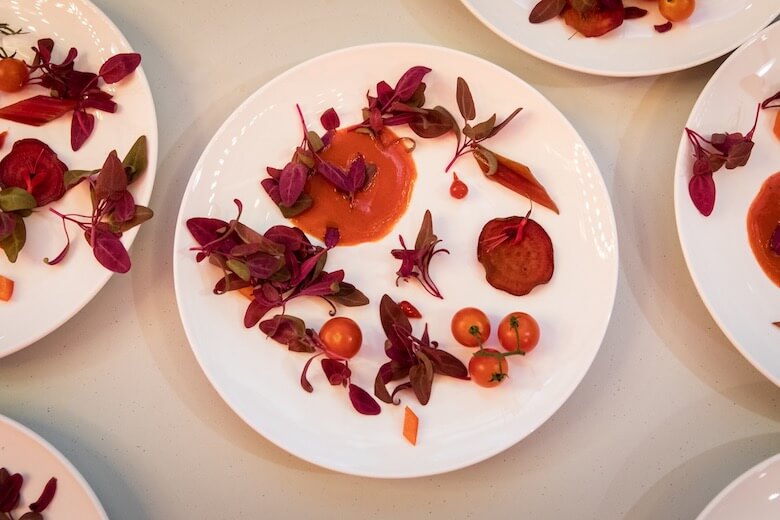 “I usually get started by thinking about how I’d like to present a color, how I’d like the whole experience to feel,” says Jen. “From there, I make a list of all the foods I can think of in that color.” Photo credit: Walter Wlodarczyk.

EM: What themes did you want to touch on specifically with the red meal?
JM: Wanting to play with ideas of romance, I served a deconstructed sushi course in a red velvet heart-shaped box, and homemade strawberry cardamom candy gems in little red jewelry boxes with the Valpolicella Recioto. There was a spaghetti and meatball course (made with tomato powder-tinted pasta) as nod to the “Lady and the Tramp.” We opened way too many bottles of wine in the hopes that diners would have slightly blurred, painterly vision by the end of the night, which I think they did.

But I wanted some death drive tension too so that it wasn’t all romantic fluff. I had been thinking a lot about bondage—more as a metaphor than in the black latex S&M sense, although I was also thinking about Japanese rope bondage, kinbaku.

We taped a hundred long-stem red roses in a row to the wall of the entrance hallway, which became its own kind of metaphor—flowers out of water, pinned down with black electrical tape, dying—pretty antithetical to what flowers mean when put in a vase on a coffee table. I also served a strawberry galangal sorbet as a palate cleanser—vibrant and sweet but spicy—served with a strawberry that had a big bite taken out of it. I wanted the diner to feel invaded by having had their food partially eaten by someone invisible. It’s a little perverse. (Full disclosure: I lined my mouth with clean plastic wrap to pre-bite the strawberries; it was totally sanitary!) We also served steak tartare as the first course—a pretty explicit reminder of the death that eating necessitates—but also a health risk because there’s always the possibility of contamination, no matter how carefully it’s prepared. 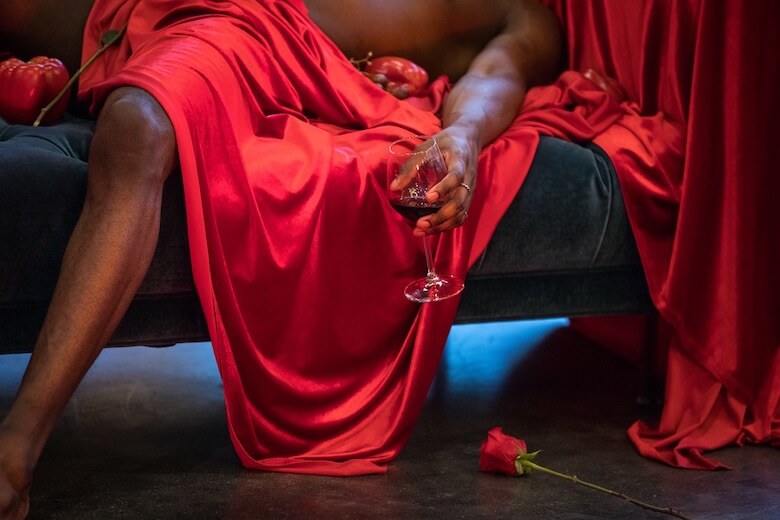 A live figure model draped in red velvet and roses relaxed on a couch while an artist drew his portrait. Photo credit: Walter Wlodarczyk.

EM: As for achieving full sensory immersion, how else did you attempt to convey red to your diners?
JM: There was a live harpist (Marilu Donovan) and cellist (Young Gun Lee) performing as guests walked in, and I posed a live figure model draped in red velvet and more roses on a couch with an artist drawing his portrait as a more literal incorporation of the painterly aspect. A musician named Aerial East performed with a string ensemble; her voice is so piercingly beautiful that it made a few attendees cry.

My friend Jerome AB, a dancer and choreographer, was one of the performers, as well. We had been talking about bondage elements, so he actually studied rope-typing with a bondage master, and did a beautiful movement piece where he worked his way around the perimeter of the room—lined with red rope— tying himself more and more, until he was almost immobilized by the end. Cameron Mesirow, who performs as Glasser, sang an Albanian folk song completely acapella wearing a pearl harness that she made. She also has a gorgeous voice, but her performance was more confrontationally beautiful, loud and gut-wrenching. Watching from the kitchen, the whole thing seemed surreal.

EM: What’s next?
JM: I’m not sure about the future of the color meals—I’ve put them on hiatus for the time being so that I can experiment with other projects, although there are still two colors left that I could conceivably turn into meals—orange and beige. I’m in the preliminary stages of talking with an author about a concept dinner to accompany the release of a short story she’s working on. I have a cotton candy pop-up this month, and I’m really hoping to host some outdoor food events this summer. I’d really like to make a coffee table book of outlandish recipes, maybe with photos—kind of my take on The Futurist Cookbook. But there will definitely be more food events soon! There’s a mailing list on my website, www.badtaste.biz, and I post about what I’m working on on Instagram (@badtaste.biz).