The second annual Iconoclast Dinner celebrated the life and work of the late chef Patrick Clark. 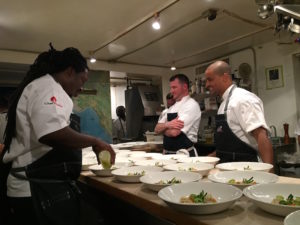 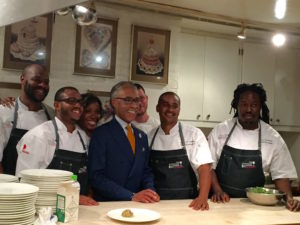 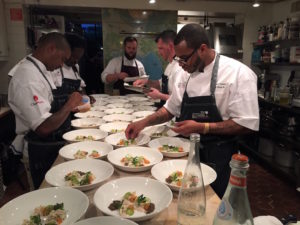 On Saturday, June 4, the The Dental Kidz Foundation hosted the second annual Iconoclast Dinner Experience at the James Beard House, an evening that celebrates groundbreaking chefs, wine and spirits masters of color.

This year’s dinner, hosted at the James Beard House in the West Village and chaired by celebrity chef Carla Hall, co-host of The Chew, was held in honor of the late Patrick Clark, a Brooklyn-born, French-trained chef who brought French technique to American cooking.

Clark, who in the 90s was invited to take over the role of the White House chef for the Clinton administration, later took over the historically daunting task of executive chef at Tavern on the Green in 1995. Two years later, congestive heart failure forced Clark to leave his post, and in the hospital, the chef became known for sneaking in his own ingredients and supplies. The transplant never came, and Clark died in 1998 at the age of 42. At the time, Clark was the first black chef ever to be nominated for the James Beard Foundation’s Best Chef Award.

Clark’s son, Lure Fishbar chef Preston Clark, was among the chefs and innovators honored Saturday evening, along with Paul Carmichael of Momofuku Seiōbo in Australia, JJ Johnson of The Cecil and Minton’s in Harlem, Nyesha Arrington of Leona in Venice, California; pastry chef Ebow Dadzie of the Marriot Marquis, Colin Asare-Appiah, the senior ambassador of Bacardi, and Luvo Ntezo, head sommelier of One & Only in Cape Town, South Africa.

During Saturday’s sold-out dinner experience—which began with a taste at 3:00 p.m. before transitioning into a VIP reception and dinner—lasted late into the night. Energy in the Beard House’s tiny kitchen was at a high. From the VIP reception through dinner, six chefs and select staff battled heat exhaustion to deliver several hundred plates from the kitchen—lobster and cassava from Paul Carmichael, then JJ Johnson’s bacon and dehydrated peach, and pineapple mango compote from Ebow Dadzie. For the general reception, Paul brought out foie gras and plantain with guava, and there was Hamachi crudo from Preston Clark, and four more dishes.

At dinner, the kitchen only got more animated, with guests dropping by to talk shop and basketball—will Lebron be able to help the Cavs take the NBA Finals, or is this a Warriors season, again?

In the middle of service, the star power in the kitchen was briefly upstaged by a notable dinner guest, the Reverend Al Sharpton, who stopped by to say hello and take a few pictures with the chefs. Three courses later, Dadzie closed out the evening with a “pre-dessert,” sugar cane consommé with sorrel sorbet and fruit vapor, and then the real thing, a deconstructed entremet, or mousse cake, with dark chocolate, Madagascan vanilla, passionfruit and raspberry.

All net proceeds from the Iconoclast Dinner Experience, including a silent auction hosted by Charity Buzz that runs through June 16, will benefit students of Spelman College, the historic black college for women in Atlanta, GA. The Iconoclast Dinner is the annual fundraising event of the Dental Kidz Foundation, which partners with non-profits to support educational initiatives for girls and underserved groups. This year’s dinner will support the Dr. Lezli Levene Harvell Endowed Scholarship for International Students, for Spelman students from Jamaica and sub-Saharan African countries.