Francis Lam loves food and football…just not together. Here he weighs in on the Super Bowl, Richard Sherman, The Notorious B.I.G. and the perfect game day wing. 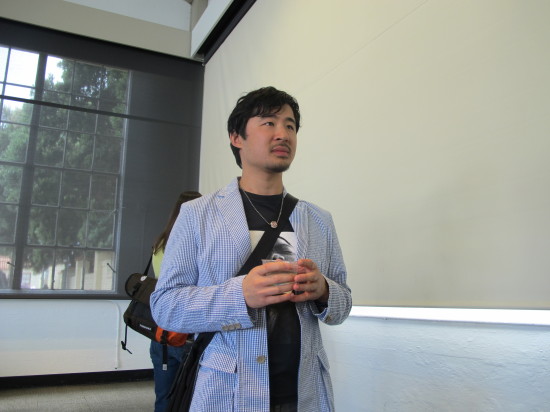 In case anyone doubted Lam’s enthusiasm for Biggie Smalls, here he is sporting a fan t-shirt at the Street Food Festival. Credit: Flickr / Gary Soup

Food writer, “Top Chef Masters” judge and Brooklynite Francis Lam loves food and football… just not together. Here he weighs in on the Super Bowl, Richard Sherman, The Notorious B.I.G. and the perfect wing.

Francis Lam: I’m a Chargers, Packers and Saints fan, in roughly that order.

NK: Who do you have for the Super Bowl?

FL: Honestly, all three teams that I love were in the playoffs, which never really happens, but obviously by the second week, that was no longer a concern. [Laughs] I’ve been so impressed with the Seahawks defense, especially the secondary. It’s hard to say. Those dudes are awesome and I want those dudes to keep being awesome.

NK: What do you think of all the controversy surrounding his postgame interview? The response was… racist.

FL: The first thing is, you just watched a three-hour event where men were literally destroying their bodies and their brains for our entertainment, and his yelling is the outrageous thing? Where’s the sense of perspective? It was an incredible game but to be completely honest, it was really weird for me to watch, because it was everything I love and hate about football rolled into one.

FL: There was a ton of skill and passion, which is amazing to watch, but it was also one of the most brutally physical games I’ve ever seen. And they showed the replay of NaVarro Bowman’s leg injury about 25 times. I love the game of football and, obviously, it’s a violent game, but you feel a little weird about it if you have any sort of conscience. We hear the stories of running backs who can’t walk when they’re 40. Yeah they get paid for it, but I can’t feel completely great about watching that kind of damage being done to people knowing they have long-term consequences. I still do it, though. I guess you just put things aside, like when you go eat that fast-food burger once in a while. It tastes really good, sure, but you know it’s bad for the world.

NK: Have you ever written anything and received a backlash like Sherman’s?

FL: Oh yeah. I’ve definitely written stories where people want to bring racial issues into it. In part because I try to address those things in some of my writing. But I think in regards to Sherman, I was surprised people were still talking about it a week later. Like, there’s a civil war in Syria but you only hear about that for 10 minutes. Anyway, he mentioned that calling someone a thug is really a socially acceptable way of calling someone the n-word. And then you see two days later, Justin Bieber gets arrested drunk and high, and he’s only “a misguided kid.”

I wrote an essay on what listening to The Notorious B.I.G. taught me about food. The point of it was, this person obviously lived a different life than I did, but his songs connected with me right away because he used something as universally acceptable as talking about butter crunch cookies and chocolate milk. He was talking about really being a kid and it’s something we can all understand. And so I wrote about that and some people said I was glorifying a thug. I was like, you know, that’s exactly the point I was trying to make. Call him what you want to call him, but the fact is, there’s so much that we all still have in common, regardless of how different we think we are, and food is one of the ways we can demonstrate that to ourselves. Don’t get me wrong — food can also divide. Anything that’s emotionally powerful can be used to hurt just as much as to heal. I wrote something last year for The New York Times that explored why American-born, American-raised chefs get more famous cooking immigrant food than the immigrants themselves. So I was talking to people like Rick Bayless and Andy Ricker and asking why, say, Ricker is this great voice of Thai food in America when there obviously are Thai people that run Thai restaurants in America. I didn’t want to suggest they were stealing the show, but I wanted to look more into society as far as why they’re willing to accept them as ambassadors to these cuisines. I think issues of culture and race and class are totally there when you’re talking about food, whether you want to acknowledge them or not.

NK: I can agree with that. What do you eat when you watch football?

FL: Honestly I don’t really eat when I watch football. Mainly because, you know, everyone’s been to that Super Bowl party where no one is really watching the game, and everyone’s talking to each other. I hate that party. I want to watch the game. I really love the game, and I really love food, and I really don’t wanna mix one with the other. But I get it. Football or any sport, part of it is tribal practice. If you’re in a room with other fans and you’re watching the game, you’re yelling at the same time, and that feels really good. And having food with a bunch of people is the same. It’s a bonding experience.

NK: So for the Super Bowl, you’ll be home with no food?

FL: I haven’t really planned anything yet, actually.

NK: You live in Brooklyn, right?

NK: Wings are the quintessential football food. Where do you go for them in your neighborhood?

FL: My wife doesn’t eat meat, actually, so I won’t go to the bar and sit by myself with some wings and watch the game. It’s just sad. Everyone feels bad for that guy. [Laughs]

NK: You eat wings, though?

NK: What makes a good wing?

FL: Well, I don’t understand the hot sauce that melts your face, especially if you’re trying to watch the game. You can’t actually watch the game, now, because you’re crying. First of all, you need to have bleu cheese dressing. After you dip into the bleu cheese, you want there to be not so much of the hot sauce that it’s shoving it in your face, but you want enough hot sauce so you can taste it on the second bite, which won’t be dipped. The other thing I will say about football eating, and I feel strongly about this: If you’re going to be eating something while watching the game, it has to be something you can eat with one hand. [Also,] if you want to get all New Yorky about it, I’d say to go good and simple — get some tortilla chips from Tortilleria Nixtamal or North Fork Potato Chips. Serve dips at your own risk, because someone is going to knock that bowl over when Sherman picks Manning off.

NK: Is your other hand free, or holding a beer?

FL: I think you just don’t want something so involved that you’ll have to use two hands. The most commonly seen and least dignified position while watching football is trying to balance a plate on your lap so when you’re eating something it doesn’t fall all over you. So like a sloppy burger, no. It’s stupid. You don’t wanna sit there with a plate teetering with potato salad or fries, and then you can’t move your leg because stuff is dripping off my burger. Don’t put yourself through that. The plate’s gonna fall and now you’re covered in burger juice. It’s a total rookie mistake. You want food that won’t fall apart and won’t fall on you.

NK: I know you love Twitter. Do you have a hashtag for that?

FL: If you have a hashtag for that, you’re screwed because you’ll be trying to tweet while eating your food and balancing the plate. Leave multitasking at work. For three hours on a Sunday, don’t do more than two things at once.