Chelsea’s Empire Oyster Pop-Up Will Change How You Slurp 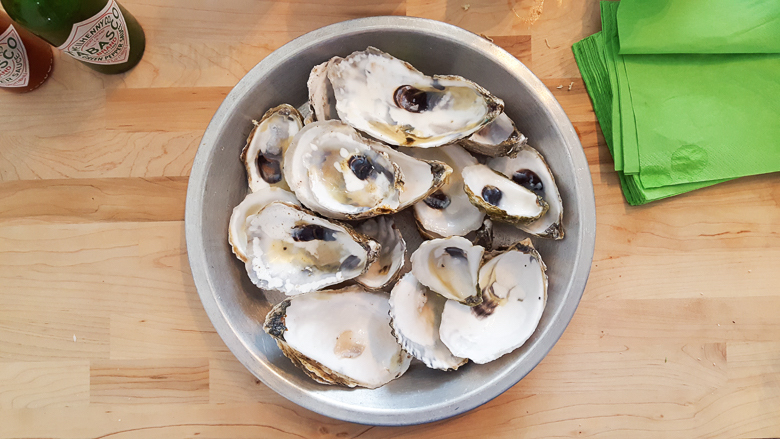 A New Yorker’s obsession with oysters is nothing new. More than an aphrodisiac, our historic love affair with oysters is so obvious and intense that Mark Kurlansky wrote an entire book about it back in 2006. The Big Oyster: History on the Half Shell chronicles all the sexy and dirty details of New York’s infatuation with oysters, from the Lenape tribe’s heaping middens, through the city’s many ghettos, galas and famous oyster cellars where European settlers insatiably devoured New York’s oyster estuaries to extinction.

Today, modern Manhattan is drowning in oyster happy hours. Nearly effortless to find and hard to resist, the ubiquitous dollar oyster happy hour has made it easy to make the affordable mistake of believing we are in a happy, monogamous relationship with the omnipresent Blue Point. (Not-so-fun fact: true Bluepoints, oysters harvested of the Long Island coast of Blue Point, were eaten out of house and home and have been extinct since 1938. What you’re slurping down now is most likely an oyster from Connecticut, though generally any plump oyster from New York, New Jersey, Connecticut or even Virginia can be labeled a modern Blue Point.) Thanks to a low price point and oversaturation of these oysters on the menu, we’ve become complacent in settling for a good, cheap oyster instead of trying to discover great, new favorites.

Like any good friend in food, Empire Oyster founder Kevin Joseph wants us to consider our options. His omakase oyster bar concept urges us to take our relationship with bivalves to the next level, and he’s willing to guide the way.
A bit of an oyster-preneur, Joseph grew up on Long Island in a family of seafood restaurant owners. In college, he worked summers at his grandparents’ restaurant in Florida. After moving back to the NYC area in 2009, he started New York Oyster Week as way to “edu-tain” consumers on the importance of oyster reef restoration in New York Harbor. In January 2016, he kicked off Miami Oyster Week—but made a pit stop in the “shuck truck” in up-and-coming St. Petersburg, Florida, on the way down.

“I had a friend, Jon Daou,” he says, “who called me once a year to try and get me to bring the Shuck Truck to St. Pete and start doing something with oysters.” Joseph had always told him no. This time Daou offered a no-risk opportunity for Empire Oyster: do a three-month trial run of a raw bar a couple of nights a week at Daou’s new coffeeshop-cum-cocktail bar in St. Pete’s buzzing Edge District, all expenses paid.

On March 1, Empire Oyster St. Pete casually and cautiously shucked its first oysters while nestled at the back of Central Avenue’s Intermezzo Cafe and Cocktail Bar. This is where the happy accident of Empire’s unique omakase model naturally evolved. The idea was that people would just walk up to the small shucking station bar stocked with about ten high-quality oysters, order six or 12 oysters and eat them standing at the bar. Joseph would offer suggestions, tell them about the oysters, and add accoutrements, all on the spot. “But what happened,” Joseph says, “is that people never wanted to leave. They loved the interactive experience, the Q&A. They enjoyed the show.”

By March 3rd, he says he knew the experimental concept was going to work. He started scouting an appropriate space to debut Empire’s omakase experience back home in the New York City area. “We didn’t know what to expect [with the omakase] but now it’s the direction I am going with…forever.”

The self-educated and self-coined “mermmelier” (think sommelier, but for oysters) understands that the secret to Empire Oyster’s success is keeping the discovery alive. Since opening, the shucking station in St. Pete has moved to the front of the space, right next to the main bar. He keeps the raw bar stocked with a few staple varieties like Empires (Long Island), Taylor Kumamotos (Seattle) and Humbolts (Washington or British Colombia), but the majority change with the tides. In order to keep exploration fresh, Empire Oyster rotates varieties on a weekly basis. “Most other spots source from one distributor that only gives them the same four or five oysters that everyone else has,” he explains. “That’s where our raw bar service is superior to everyone else.”

It’s more matter-of-fact than ego. Much like a sommelier puts in the research and legwork of visiting different wine farms, Joseph has visited between 30 to 40 oyster farms in over a dozen regions in order to meet the farmers and evaluate things like quality, price, diversity, and his dock-to-dish time. This extra effort has earned Joseph the ability to cut out the middlemen distributors and work directly with farmers to curate Empire’s exceptional raw bar from a much wider variety of oysters from several regions.

Joseph compares his omakase experience to wine tasting “where you’re watching someone live shucking oysters, tasting them one after the other, in ten or so different varieties from different regions, and end up deciding what your oyster palette preferences are, so you are better informed and educated and discerning on selecting oysters in the future.” Like wine, oysters have their own histories, cuisines, flavor profiles, acidity and texture.

The three-dollar-a-piece price tag may seem high for anyone who, like me, has flocked to dollar oyster happy hours, but all it takes is one omakase experience to lead you astray. My first time, I took my mother, who had sworn off raw oysters for over 15 years. She left ecstatic with a renewed passion for them, sending me photographs of plate after plate of raw oysters from her vacation the next week. “I have that effect on people,” Joseph laughs when I tell him. “My friends are constantly sending me pictures of oysters and oyster menus, asking me what to get.”

Empire Oyster’s first New York location is now open Wednesdays through Saturdays from 6 p.m. to 9 p.m. inside Megu Sushi at the Dream Hotel Downtown. Expect up to 12 different varieties of “ultra-premium” oysters from the United States, Mexico, Canada and New Zealand and a “carefully curated” wine, cocktail and sake pairing list.