Dough Provides These Chefs With a Canvas for Collaboration Across Cuisines 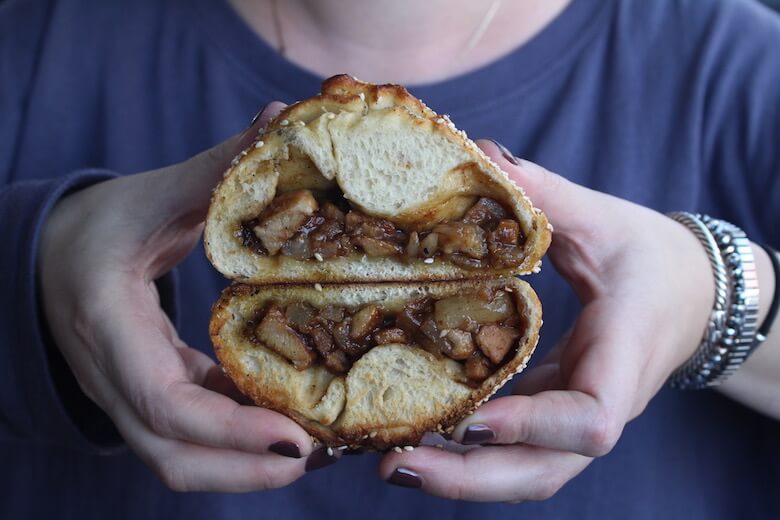 The baogel ran at Black Seed during the month of November. Photo courtesy Black Seed.

There’s no soy sauce served at Paolo Meregalli’s new dim sum restaurant. In fact, the disposable wooden chopsticks also function as tiny forks and the steam baskets yield cacio e pepe–style buns rather than, say, a steamed soup dumpling. The menu at the West Village’s Raviolo, in fact, is completely Italian. Ravioli (created from freshly made pasta dough rolled a few blocks north at Meregalli’s Mulino a Vino) is stuffed with ragu (to dip in béchamel, lasagna-style) or mozzarella and basil (to dip in pesto, caprese-style).

Italian restaurateur Meregalli, inspired by a visit to Chinatown’s Nom Wah Tea Parlor, wanted to serve the “best cuisine in the world: Italian” in the style of dim sum. In addition to the cheesy pasta bites to be dipped in prosecco-laced cream sauces, cocktails are served in oversize glass goblets, illuminated by reusable flashing ice cubes and refill pours of wine are served at a discount. The small triangular space, which boasts a neon sign with the famous Fellini quote “LIFE IS A COMBINATION OF MAGIC AND PASTA” on its whitewashed brick wall, may seem like a departure from New York’s typical dumpling spot (of which there are many), but pocket-style, dumpling-esque foods have become an almost ubiquitous canvas for local chefs to experiment and sell mash-up cuisine.

Take the Baogel, a collaboration between Nom Wah Kuai and Black Seed Bagels that ran through the month of November, which combined the traditional Montreal-style bagel with a pork bun, melding two cultures in a very not-Kosher, soul-warming finger food.

To create a collaborative dish like the Baogel, both restaurants shared ideas on what to create, based on cohesive recipes by chefs on both sides. “For this one, Nom Wah provided the filling [recipe] due to its special ingredients and we provided the bagel dough,” explains Deanna. “These foods meld together well due to texture and flavors of both products. The bagel dough is durable enough to hold the juicy pork belly and gives you a nice chewy texture you expect from a bagel and the flavor of the sweet pork belly cuts through the flavor of the dough.” Five variations experimenting with filling to dough ratios led to the eventual birth of the Baogel. (The current special is a stromboli made in collaboration with Pizza Loves Emily.)

Make sure your weekend plans include this Stromboli Bagel feat. @pizzalovesemily, stuffed with mozzarella, salami, spicy Italian peppers and drizzled in @mikeshothoney 🍕🍯. Available across all locations this December.

Even dumpling-dedicated restaurants, like Mimi Cheng’s, known for its traditional Taiwanese dumplings recreated from a family recipe, have used the dumpling as a vehicle to create an entirely new dish, like Italian short rib dumplings, Korean popcorn chicken dumplings and Miami-inspired blue crab with avocado dumplings. “We enjoy all types of cuisine and like to challenge what people expect from a dish,” sisters and co-owners Hannah and Marian Cheng said via email of their monthly-changing collaborations. ”Dumplings are an excellent medium for experimenting with food because almost every culture has a dumpling variation. It’s a familiar and comforting food in these cultures.”

Beyond a tasty bite to eat on a cold day, collaborative cuisines may indicate a more pertinent cultural shift. “I think this mash-up says a great deal about our culture. The world in general has become more of a melting pot where ever you look: fashion, design, music and obviously, food. Mash-ups are certainly nothing new in the food world—Asian-fusion, Tex-Mex, et cetera,” says Daoheung. “Living in New York we are lucky enough to be exposed to a multitude of cultures and their food, so why not take inspiration from others and make it something of your own.”

This inspiration, which has led to cultural appropriation across every industry, can also work as a successful impetus to serve traditional food in a unique way. “I am very respectful about traditions and even more about my own roots,” says Meregalli about his Raviolo concept, which he would not describe as fusion. “Italian cuisine is not only recipes, it is a way to create flavors. It is a love for ingredients and a culture of esthetics.” Meregalli doesn’t label his food as fusion, but rather the cultural collaboration exists in the way his “true Italian” food is delivered to the table.

“We live in New York,” Meregalli says. “The only city on the planet where all cultures live together in harmony and with positive interactions.” Why not celebrate that with a little (or a lot of) stuffed pasta?