Whether Uptown or in the Bronx, Your Cuchifrito Should Feel Like Home

Rapper Nitty Scott knows where to go for a plate that’s just like at abuela’s house. 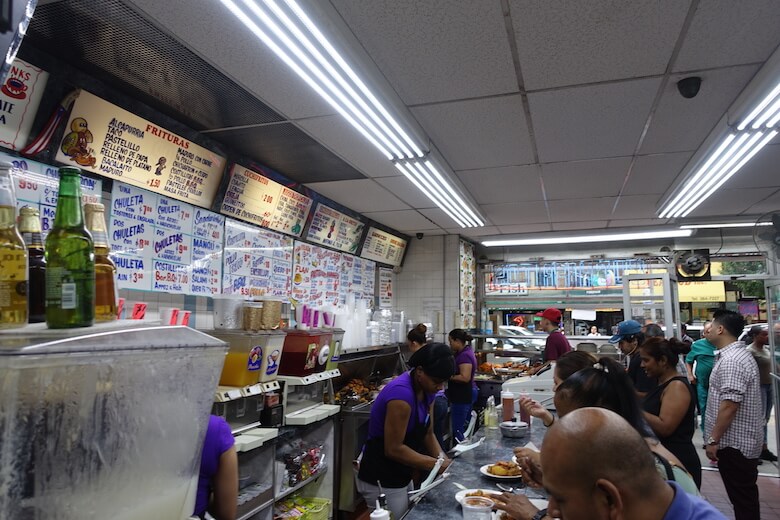 Five days didn’t seem like enough time to find an apartment for us and our toddler to call home. We crisscrossed the city for the better part of the week as the perfect apartment eluded us — often a matter of eager renters beating us to an application. A calming wave finally came over us when we made it to Washington Heights. The streets were full of Spanish speakers and produce vendors, and the familiar feel called to us in a way the more “polished” parts of New York couldn’t. Romeo Santos’s bachata permeated the air and cradled us much like the corridos of our border hometown once had. Somehow, two Mexican-Americans from the wide-open Texas desert found a sense of place in The Heights. It just felt right.

We quickly learned that, spiritually and culturally, The Heights had more in common with the Bronx than lower Manhattan. That’s why I often found myself making treks through The Grand Concourse rather than taking the A train downtown. I got to know the taquerias, empanada spots and, most important, the cuchifritos of both boroughs.

The kinship between Uptown Manhattan and the Bronx is undeniable, and the cuchifritos are plentiful (“Cuchifritos” specifically refers to the various fried parts of a pig that are served in the Puerto Rican restaurants that bear the same name). The cuchifrito on my block introduced me to some of the best morcilla I’ve had in my life, while the one just a few blocks down specialized in supple pernil. For me, “chicharrón” had always meant dried pork rinds, but almost as soon as I found the wonder of the Puerto Rican version, I made it my personal mission to sample as many as time — and my fiancée — would allow. That’s how I stumbled into what became my favorite cuchifrito in New York City, across the river in the Bronx.

For my friend, rapper Nitty Scott, the path to her cuchifrito came through living in various boroughs of New York. ”I first lived in Brooklyn, then Harlem, then higher up in Harlem. And then I got to the Bronx and was like ‘I’m never leaving.’ Living in the Bronx, I’m surrounded by my people: Dominicans, Puerto Ricans. The botanica is right down the block from me. My salon is right down the block from me. I live in such a tight-knit community, and there’s this feeling of taking care of each other. And the fact that you go to the cuchifrito and it tastes likes your mom’s… ”

The cuchifrito she’s referring to is the legendary 188 Bakery Cuchifritos off Fordham in the Bronx. Just a few days before we met there, Scott texted me asking which one I wanted to go to. “3pm Friday at my cuchifrito?” she asked. “I’ll send you the addy or we can do the big Harlem joint.” I had 188 in mind, but wanted to get to know her preferred place — partially hoping to be put on to something new. “I usually go to 188 in the Bronx, but I want to see your spot,” I replied. “OMG THAT’S THE ONE LOL,” she said.

Scott — whose album Creature was released to much critical acclaim earlier this year — tells me the cuchifrito is a part of her daily life. “My boyfriend asked if I could pick him up some pollo,” she says as she walks in. We indulge on chicharrón (both puerco and pollo), chuletas, morcilla, beans and rice, and make sort of our own small version of a family meal.

“That’s a dish that was prepared for me growing up: chuletas, rice and beans. It’s a staple. Families, and my family in particular — you had to feed entire families without much… with these filling foods that are somewhat cheap to obtain,” she says as she orders an agua fresca.

That sense of home and community in a neighborhood eatery is important for someone who’s spent the better part of her life moving around. She’s called Florida, New Jersey and even Mississippi home, with her roots firmly set in Puerto Rico. It’s an experience similar to that of many of the immigrant diasporas of New York — an experience that’s quickly dwindling as a result of rapid gentrification in certain parts of lower Manhattan and Brooklyn.

The urban settings of New York can be difficult for transplants and immigrants to navigate, and the cuchifrito provides a much needed respite from the often overwhelming reality of city life. Outside is the Bronx, in all its urban glory and magnitude, but inside 188, the landscape feels like a hospitable island eatery. “I love it, because they don’t give you, like, a tin to-go container,” she says. “It’s on a plate with regular utensils, so you really feel like you’re sitting down eating at abuela’s house.”

Scott’s music reflects the confluence of cultures that inform her. I ask her if she thinks her album is “musical cuchifritos” and she laughs and says, “Yes! Exactly! I wanted to, like, musically create a reflection of myself. I thought it was a very interesting experience of having these tropical island roots, but then having a very specific inner-city experience. It’s such a stark contrast.”

The chicharrón de puerco (my preferred dish at 188) is served with pickled red onions. The pork belly is perfectly fried and crisp on the outside, the inside oozing with succulent pork fat. The restaurant offers various beers to wash it down with, and I’m always delighted to have a Mexican Modelo to remind me of home.

Scott has to prepare for a performance in Bushwick later that night (a carnival fête put on by Dj Bembona) and asks if I wouldn’t mind running some errands with her after lunch. We pay our incredibly inexpensive tab and head to the beauty supply store, then the Botanica. “My spirits told me there’s some ill-intentioned individuals in my life, so I need to get some stuff,” she says as she peruses the aisles for despojos and aceite ven dinero. I pick up some new beads I had been wanting, unaware that the first selection I made was related to a local Dominican gang. The clerk warns me and shows me some other options.

We walk back to her apartment with a heaping bounty of chicharrón for her boyfriend, who looked anxious with anticipation. And even though it’s only 5 p.m. in the afternoon and I’m usually always planning my next meal, I know the cuchifritos will hold me down for the night. At least that was the plan, until a beguiling Bushwick taco truck got in my way.