There Is Beer Brewing at the Cooper Union

A look at the burgeoning brewing program within Manhattan’s famed college for the arts and sciences. 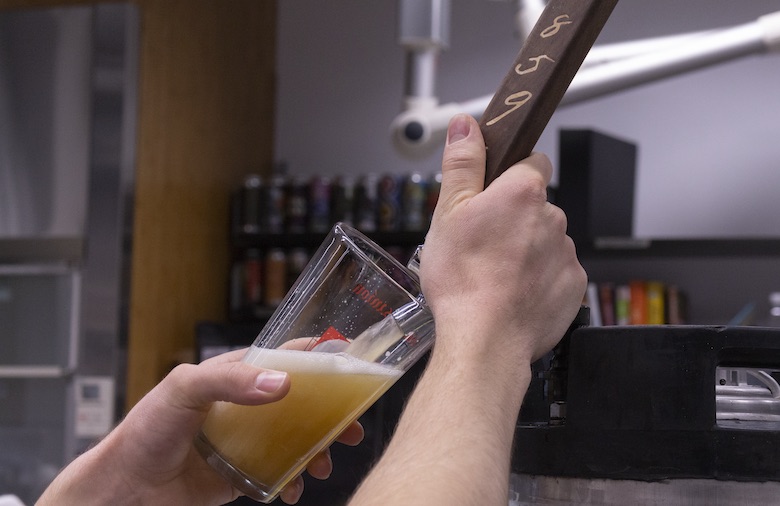 Students Pour Their Beers from a Custom Tap Inscribed with “1859” to commemorate both the year Cooper Union was founded and the name of their first Collaboration with Peekskill Brewery. Photo by Oleksiy Godz.

Union founder Peter Cooper, was a brewer in Peekskill, New York. And although the family brewery likely folded in the 1820s, the seeds had been planted for Cooper Union professor Sam Keene to unearth nearly 200 years later.

An associate professor of electrical engineering, Keene has been brewing beer for over a decade. “I was just your basic home brewer,” Keene said. “Boiling stuff in my kitchen, pouring it into buckets and then fermenting it in the closet.” And while he enjoys the activity as a personal hobby, he often found himself wishing he could share the experience with others. Enter, the Cooper Union student body. After a series of meetings with the dean and president of the Cooper Union, Keene found himself with a green light to launch the independent study course “The Science and Art of Brewing” in the fall of 2016.

Now in the midst of its fourth year, the class has catapulted Keene and his “Cooper Brue” to cult status. “When I set out for the class I was kind of like, We’re going to brew beer at Cooper right, ‘Why are we brewing beer at Cooper?’ But I didn’t want to dictate that,” Keene said. “I wanted to give that to the students, ‘What’s the point?’ ‘Why are we making this?’ and I think what emerged from that is a desire to work on things with each other.”

The four students leading the brewing production in 2019 are Michael Lange, Sophie Schneider, Camila Villa Zertuche and Willem Smith-Clark. All carry different academic backgrounds. Lange is a chemical engineer, Schneider is a mechanical engineer, Villa Zertuche studies art and Smith-Clark hails from the school of architecture. Together, they form a dynamic interdisciplinary group, however, they all joined the class with little to no brewing experience. “I’ve learned a ton; I knew absolutely nothing coming into the class,” Schnieder said. “It’s much more hands-on than any of my other classes have been, and I think that I’ve learned a lot just by [Keene] not giving all of the instructions and having the four of us figure it out together.”

In its most basic form, brewing a beer involves soaking malted barley in hot water, cooling the barley infused water, adding hops if desired, adding yeast, and fermenting the mixture in a controlled environment. All of these steps and more are taken by the students Thursdays and Fridays in the brew lab at 41 Cooper Square. “Usually there’s a theme for every year and this year our theme has kind of been centered around yeast management and fermentation temperature,” Smith-Clark said. “Getting to understand the different flavor profiles that come out of that and the complexities in managing temperature has been really interesting for us to learn.”

The lab is outfitted with state of the art brewing equipment that allows Keene and his students to produce quality beers even craft brewers can enjoy. “The fundamental processes are the same, a lot of the fittings we use, a lot of the tri clamp fittings, those are the same stuff they use in the professional breweries,” Keene said.

This year’s student cohort utilize the equipment weekly to produce a variety of beers ranging from Porters to Saisons. “It takes pretty much a month from start to finish with conditioning to get one of these beers done,” Smith-Clark said. “We did a California common, a steam beer, which is fermenting at a hybrid temperature so that’s between a lager and an ale, next we did a lager, which ferments colder, then we went to a Belgian which ferments super hot.”

With a wealth of equipment, a group of talented amateur brewers and dozens of full beer kegs, Keene spent the first two years of his class puzzling over how to present his students brewing to a larger audience. A conversation between Peekskill Brewery and the co-owner of Cooper’s Craft & Kitchen, David Clark, changed all of that. “I found out that there was a brewing school in Cooper Union, maybe three years ago through a mutual friend and a regular of Cooper’s,” Clark said. “So I reached out to the owner of Peekskill Brewery, and I said, ‘Hey, I just happened to find out that Peter Cooper was actually a brewer in Peekskill, wouldn’t it be cool if we brewed a beer with the Cooper Union in honor of him.’”

The product of this relationship was a student brewed, dry-hopped porter called “1859,” which Keene happily proclaims as the best beer he’s ever had. The most exciting part of the partnership for Keene and his students is their newfound status in the commercial beer market. “1859” went on tap at both Peekskill and the two Manhattan Cooper’s Craft and Kitchen locations. “When that beer got released last year, I mean, we were watching it on UNTAPPD,” Keene said. “We were reading the reviews and that was so much fun.” To date, the partnership is going strong. Keene and his students traveled to Peekskill November 22 to brew their second beer with the upstate micro brewery, a Pilsner.

Despite their dedication to academic crafts outside of brewing, the students from “The Science and Art of Brewing” have been heavily influenced by the class. Alumni Helen Ho graduated from the Cooper Union in 2018 with a degree in chemical engineering. Now a flavor chemist trainee at Flavor Dynamics, she credits the class with paving the way for her career in food science.

“At Cooper we had very little food science, food chemistry classes, but I knew I really wanted to go into that, so when Keene mentioned that he had this class, I emailed him all the time,” Ho said. “Without this class, I’d just be working a desk job in some power plant or building ovens, what other chemical engineers do, but because of this I got to really balance art and science.” Another “Cooper Brue” alumni, Matt Grattan (BSE’19), is a first year masters student in chemical engineering. His masters thesis is exploring the uses of spent brewing grain in baking.

When it comes to this year’s students, the class’s influence is just as profound. “My interests outside of [brewing] for my career are in biotechnology, so I’m already interested in using living organisms to make valuable products and that’s what beer brewing is; it’s using yeast to do the heavy lifting for you and making alcohol,” Lange said. “Beer brewing is definitely my plan B. Hopefully I’ll continue to dabble, maybe home brewing depending on where I end up. It’s certainly not off the table.”

Seeing the growth in both his students and his class structure is particularly gratifying for Keene. He speaks wistfully about “going pro” and opening a nano-brewery in the commercial space at 41 Cooper Square. “I don’t know if that will ever happen,” Keene said. “It’s a wild fantasy.” For now, signing his emails with “Brewmaster” will have to suffice.