The Shake Down Pop-Ups Mix Hip-Hop and Craft Cocktails

Bartenders Jairo Taveras and Robert Nieves wanted to create a party that reflects their lifestyles. 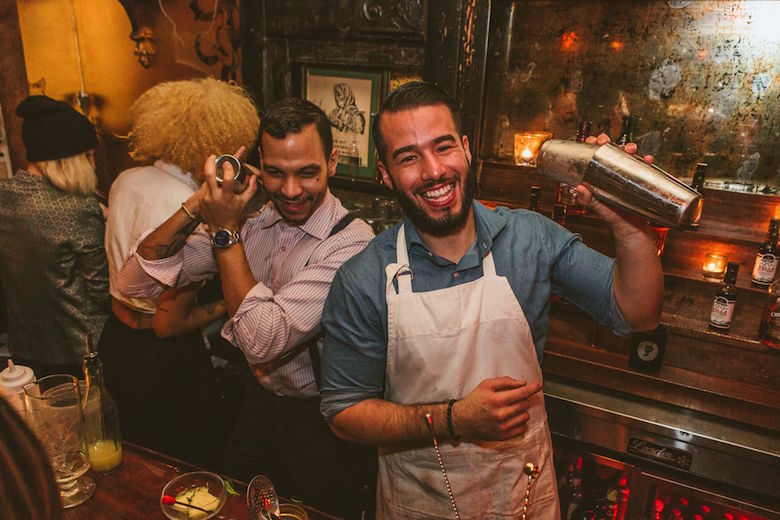 Jairo Taveras and Robert Nieves are trying to shake up the cocktail scene.

It’s not easy to find good cocktails and a good party happening at the same time, in the same place. We almost understand this to be inevitable: If you’re dancing, you’re probably drinking Modelo; if you’re drinking a Penicillin variation, you’re not dancing. But these worlds don’t have to be mutually exclusive. The Shake Down, from bartenders Jairo Taveras and Robert Nieves, has started the work of merging them.

Taveras and Nieves became friends in late 2016 during a coquito competition. The latter bottles and sells an in-demand recipe during the holidays, and the former tried to develop a vegan version while working at Washington Heights bar Pocion Lounge—despite some friendly shit-talking, it’s understood that Nieves’s take is untouchable. As New Yorkers of the Caribbean diaspora, they have an approach to cocktails that’s irreverent yet approachable, and they almost always throw in nods to hip-hop or their heritages. When I first met Taveras, he served me a Mamajuana-inspired drink; Nieves makes a cocktail named for the Jay Electronica song “Better in Tune With the Infinite” that deliciously blends sage, orgeat, ginger syrup, limon, grapefruit and mezcal. 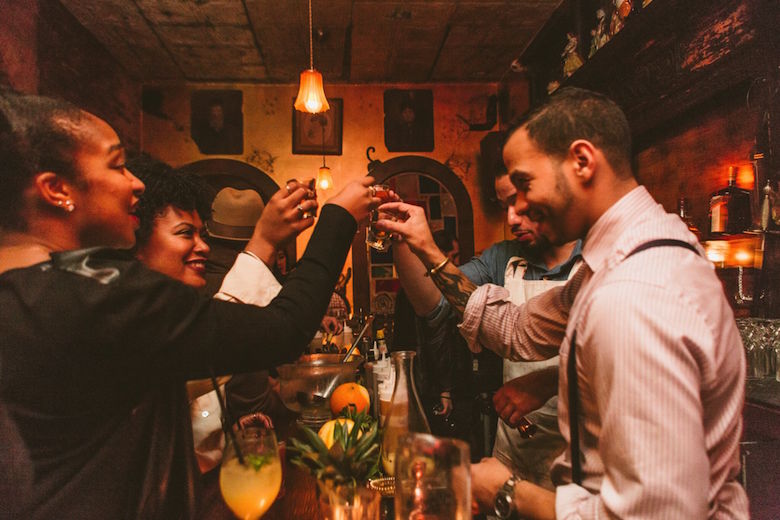 Doing shots with friends at the first Shake Down pop-up.

“When you grow up in a certain culture, you think, How do I incorporate this into my daily life now? How do I make a morir soñando without all the extra calories, and when we made the coquito for the showdown with me and Rob, I said I wanted a healthier option—even though Rob doesn’t agree with me,” Taveras jokes. The serious Nieves, who’s working, interjects with a sensible perspective: “I do agree that everyone needs options. My palate and everyone else’s palates are different. I like rich stuff. They need people like Jairo and they need people like me.” 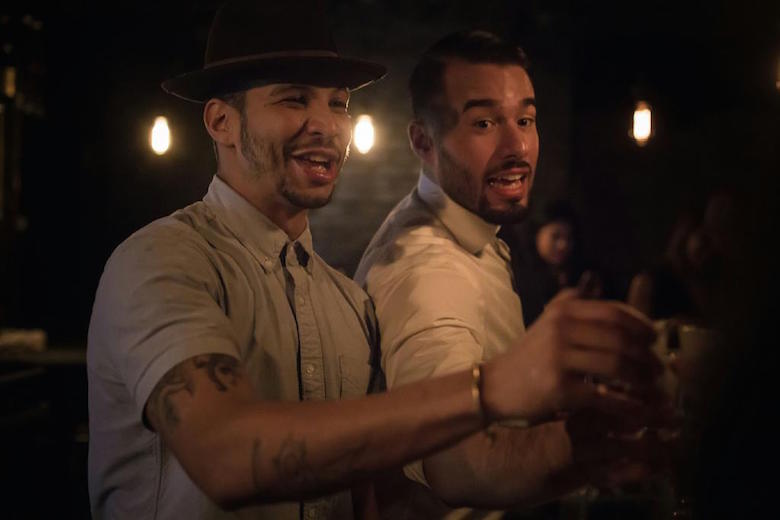 Like most bartenders, though, they didn’t start out thinking about cocktails at this level, but fell in love with the work as they found out how creatively satisfying it can be. “After I left my job in Harlem, where I was basically a happy-hour bartender, I went downtown and started working at Kitty’s Canteen,” Taveras tells me of his career trajectory. “I met Cory Dixon, who’s basically a genius. He opened me up and fed everything to me, and I took it and I ran with it.” Dixon introduced him to a horny goat weed syrup he tweaked and used in his entry to the Old Forester Bourbon Old-Fashioned competition last year, which he won. Nieves, too, loves to get into the kitchen and work on syrups (“that’s my quiet time”); Taveras pokes fun at his attachment to an horchata blend.

Both have been working behind the stick for about five years each. Currently, Taveras calls uptown bar The Honeywell home, while Nieves is head bartender at Long Island City’s Oro Restaurant & Lounge. The Shake Down is their baby, though, and they have a far-reaching vision—but for now, they are focused on throwing more parties.

The first Shake Down pop-up happened at Taveras’s old bar Kitty’s Canteen, where they were making do with whatever was behind the bar—a mixology version of Chopped—but as a guest, you wouldn’t have known it was a potentially stressful situation. They packed the small bar, where a DJ played everyone’s favorite ’90s hip-hop and R&B. Their second pop-up took place at the larger, subterranean Meatpacking spot Subrosa. A prepared cocktail menu was on offer, and even early in the night, the crowd was sizable and impressive, considering they’ve only been promoting via digital flyers and word of mouth. “People are adding us on social media like crazy,” Taveras says, seeking out their invite to the next one.

“We want to produce a dope-ass time for everyone who comes to our events,” Taveras says. “We want people to think, ‘Oh shit, I’m having a dope-ass cocktail while I’m listening to this Biggie.'” If you’re lucky, you’ll get to experience it for yourself at pop-up number three.