Irving Farm Shows Off Real Coffee Flavor with its “Experiments”

One harvest, hand-picked on the same day from the same part of the farm, is processed in four different ways with distinctive results. 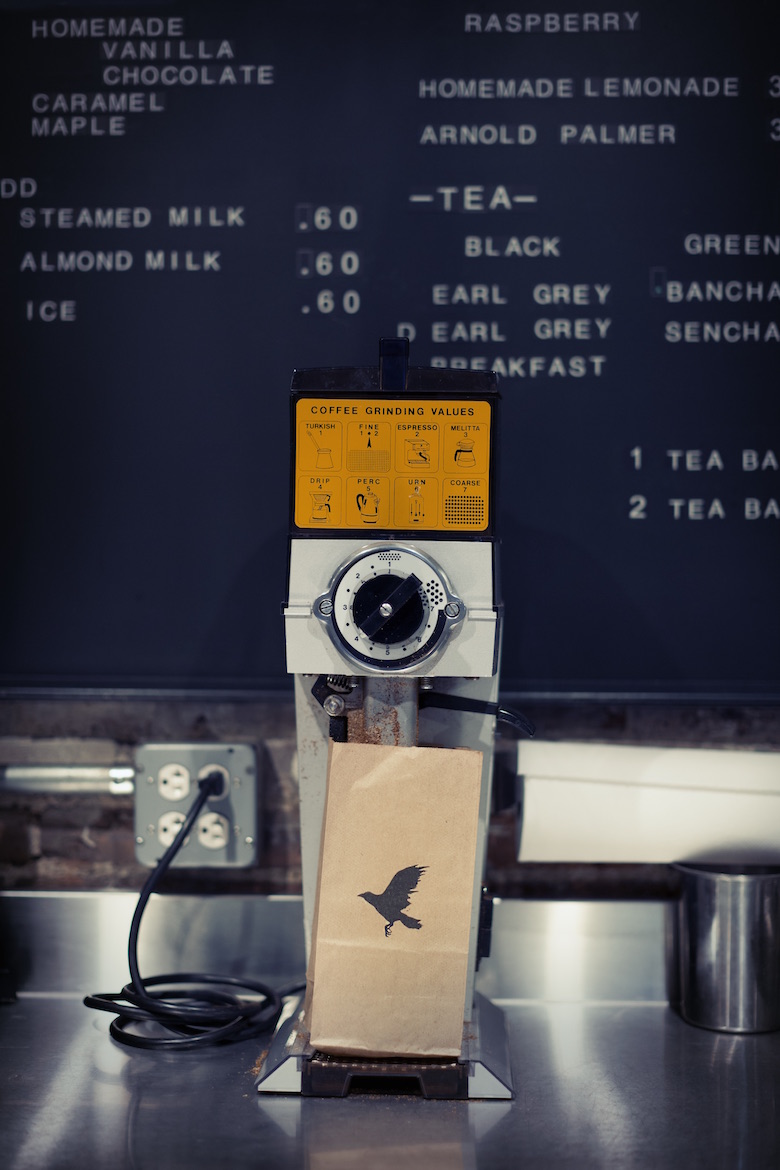 Not too highbrow, not too uncouth; Irving Farm serves a perfect steadiness of congenial coffee.

No matter where you get your cup of coffee from, the new focus is flavor. All the way from Starbucks to deeply knowledgeable coffee establishments—like Irving Farm—the character and the taste of every cup is being showcased. In fact, Irving Farm, with its “Los Niños Experiments” is presenting the opportunity to see just how different methods of processing coffee beans will directly affect flavor.

Irving Farm Coffee Roasters, which opened in Gramercy in 1996, has carefully expanded across the city with a selection of coffee shops all catering to a certain egalitarian notion of the bean. Not too highbrow, not too uncouth; a perfect steadiness of congenial coffee. And, after 20 years they still roast in upstate New York, at first out of a converted carriage house and now in Millerton with a newly opened gorgeous roastery.

For the “Experiments,” Irving Farm has honed in on its unique relationship with an El Salvadoran family of coffee farmers. One harvest, hand-picked on the same day from the same part of the farm, is processed in four different ways—Natural, Honey, Wild Honey and Washed—with distinctive results. 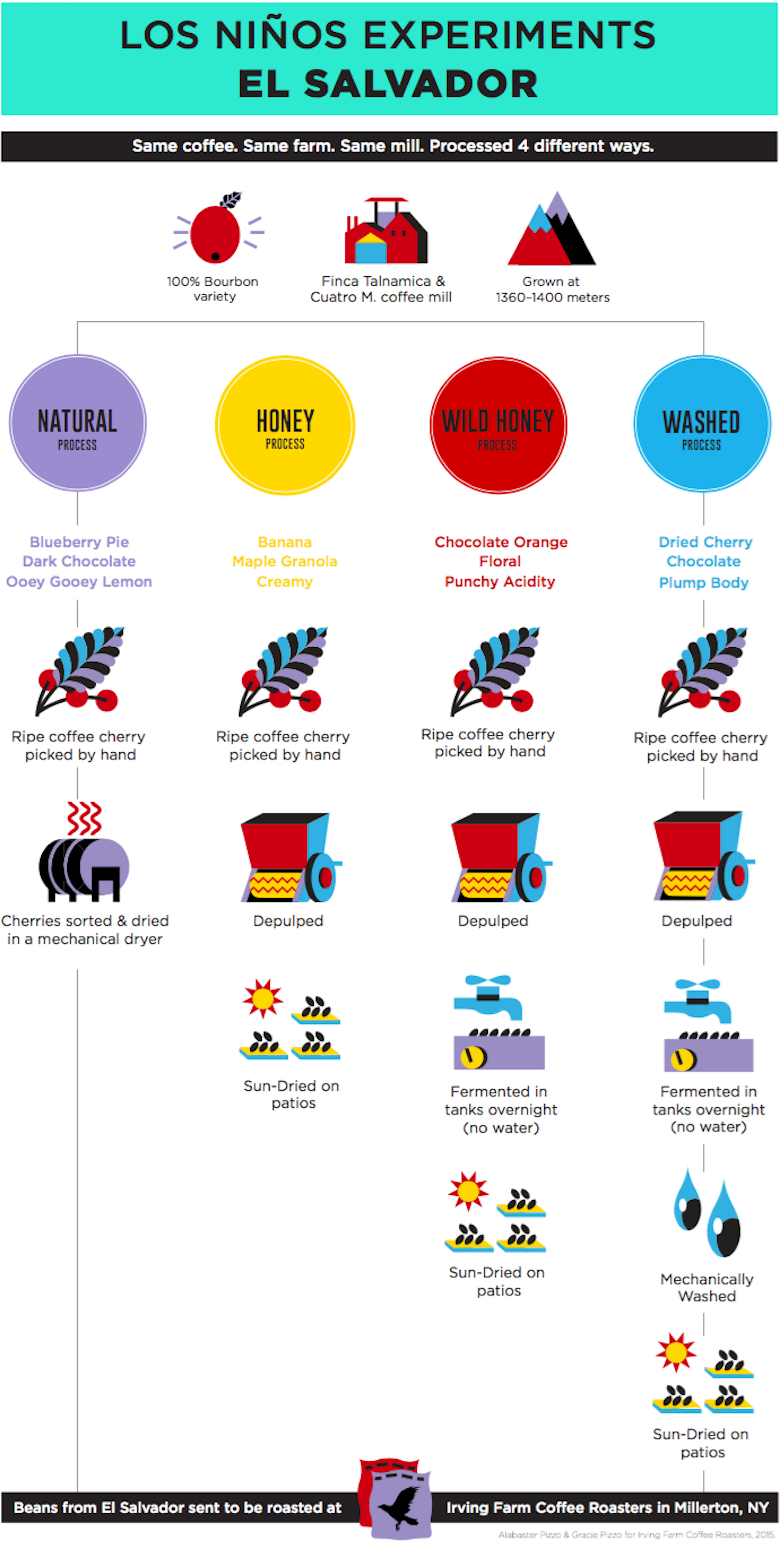 The Wild Honey, unlike the other three traditional practices, deserved its own intriguing process—something that’s never been done commercially. Here Irving Farm partners, the Finca Talnamica in El Salvador and Cuatro M. coffee mill, de-pulped the hand-picked coffee and placed the beans in tanks without water for 12 to 16 hours until—and here it starts to get a little scientific—the pH reaches 4.5. The fruit (which coffee beans are) then slowly breaks down. The next part of the process is where the coffee is spread into raised beds to dry in the Central American sun. And the taste: chocolate meets orange meets floral with a punchy acidity.

The other three had their own paths to find their character. The Natural, giving flavors of blueberry pie, dark chocolate and what Irving Farms calls “ooey gooey lemon,” is not sun dried and fermented but rather machine sorted and dried. The creamy banana, maple granola Honey is not fermented, but sun dried. And the Washed process is fermented, mechanically washed and then sun dried, which results in a plump dried cherry chocolate taste. Same beans, so many savorings. 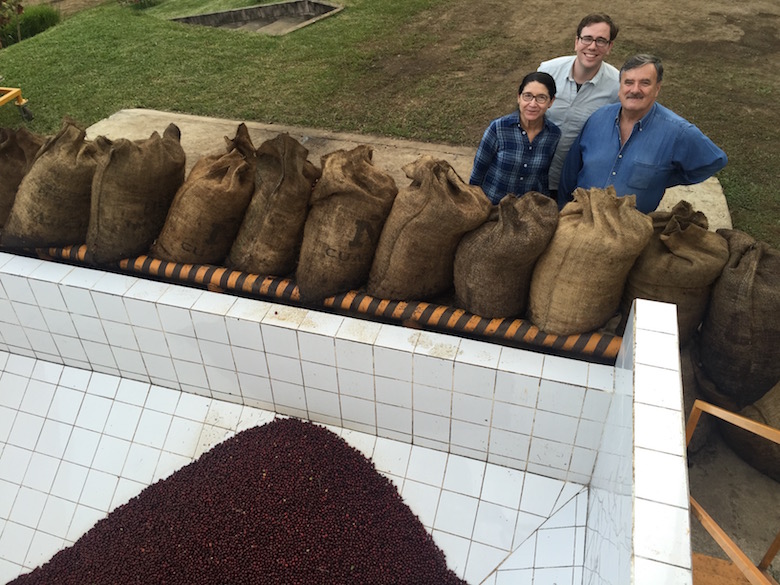 But the story of how Experiments came about is equally interesting. In 2012 Nena Méndez walked into the Irving Farm café on 79th Street on the Upper East Side and noticed on the back wall a black-and-white mural of Guadalupe, a coffee farm from her homeland. She inquired about the photographer—who happened to be the green coffee buyer Dan Streetman—and invited him to visit her family farm on his next trip to El Salvador.

Nena’s mother, Bessita, came from a lineage of Salvadoran coffee farmers dating back to the 1880s, and her father, Alfredo Ortiz Mancia, purchased Talnamica in the 1950s. Today the farm is owned and operated by Nena and her three siblings along with her husband, Hermann, and farm manager Don Hector Vides.

And so the Experiments came about when Nena’s daughter, Mayita, who has worked for Irving Farm since 2013, suggested that they scrutinize the coffee process by taking one harvest through four unique processing methods. She wanted it to represent the four Ortiz Herrera siblings: Nena, Freddie, Cecil and Carlos. And so the beans received a unique journey.

The coffee itself is of 100 percent Bourbon variety, which is grown at an altitude between 4,462 and 4,593 feet (this is becoming trickier every year with global warming), and is then hand-picked by 150 workers on the same day from the same part of the farm. The ripe cherry is then brought to the Cuatro M. coffee mill, and that is where the experiments begin. Now the Experiments are available in New York, whether you’re doing a Chemex at home or popping out for a coffee in the city.

12-ounce bags retail for $15.50 and can be purchased online or at any of their seven cafés, where you’ll also find the Experiments featured as pour-over and single-origin espresso options.