Shuck, Pop, Slurp, Sip: How to Pair Oysters and Wine

Paul Greenberg recently caught up with pairing expert Jon Rowley to see if they could arrive at some fundamentals. 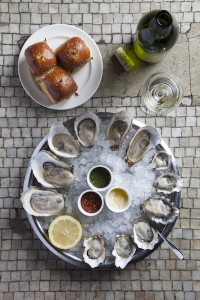 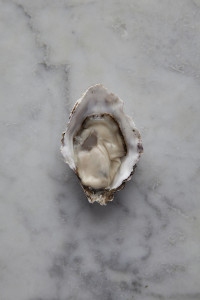 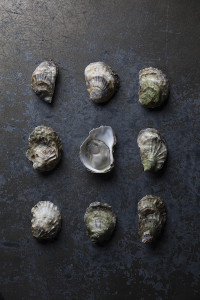 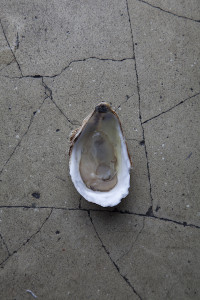 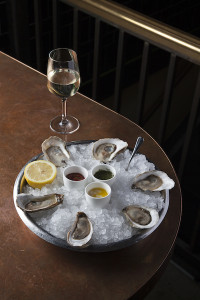 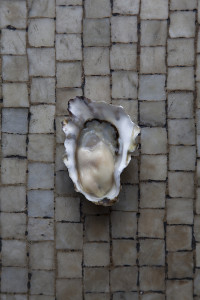 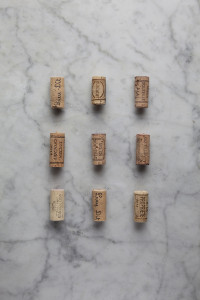 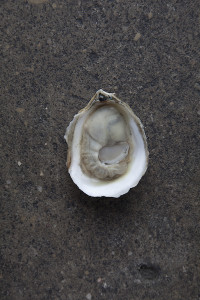 A few years ago, when our son was still very small and difficult, my partner and I managed to secure a rare date night which began, as these things do, with a terrible argument. I have no recollection of the argument’s nature, only that by the time we reached the doorway of Marlow & Sons there was serious contemplation of calling the babysitter and informing her we were on our way home.

But then came the wine and the oysters.

Six excellent North Forks and a cold, crisp white that suited it exactly perfectly. Knot by knot the argument came untied. Another six oysters were ordered, two more glasses of that same wine came and the fight was past tense. Ever since, I have regarded the pairing of oysters and wine as mandatory to the maintenance of my relationship and a necessary prelude to any date.

The only problem is, I never did write down the name of the wine they served that night and I have been grasping sometimes successfully, sometimes not, for a repeat experience. It’s for this reason that I recently got back in touch with Jon Rowley, a man known throughout the United States as a discoverer of specific good tastes and who has a particular affinity for oysters and their wine mates.

Twenty-odd years ago, encouraged by the likes of Ruth Reichl and Russ Parsons, Rowley started the Pacific Coast Oyster Wine Competition to find the best West Coast wines to go with oysters. Muscadet and Chablis, French wines, were traditionally served with oysters on the half shell — but Rowley was convinced there had to be American “oyster wines.”

But how to find them?

He hit on the idea of a competition in which wines were judged by how they paired with oysters. Each year 120 to 220 wines are entered. Wines are tasted blind with at least one oyster by five preliminary judges, a weeklong process.

They selected 20 finalists. Judging panels of 12 to 14 prominent food and wine writers and restaurateurs in Los Angeles, San Francisco and Seattle combine their scores to select 10 prestigious Oyster Award winners.

On a recent afternoon I caught up with Rowley and tried to see if we could arrive at some fundamentals. Here is a brief distillation of our conversation.

Paul Greenberg: What makes a good oyster wine?
Jon Rowley: Everything you need to know about oysters and wine is in a Hemingway quote in A Moveable Feast. Hemingway has just come in from the cold of Paris, having failed to buy a bundle of sticks to heat his cold apartment. And instead of sticks he buys wine and a dozen Portugaises.

“As I ate the oysters,” he writes, “with their strong taste of the sea and their faint metallic taste that the cold white wine washed away, leaving only the sea taste and the succulent texture, and as I drank their cold liquid from each shell and washed it down with the crisp taste of the wine, I lost the empty feeling and began to be happy and to make plans.”

Hemingway nailed it. What you want is a crisp, clean-finishing wine, a wine that doesn’t get in the way of the next oyster.

PG: Do any particular types of wines work best?
JR: There are certain varietals that tend to be better, but it is also a matter of style. Sauvignon blanc, pinot gris have done well in our competition, but they need to be in the right style. It’s mostly that crisp finish that cuts clean. The Kenwood and Chateau Ste. Michelle sauvignon blancs have done well for years in our competition, as have the Dry Creek Dry Chenin Blanc, the Foris Pinot Blanc and the Acrobat Pinot Gris. There’s a Dry Creek chenin blanc that has been a perennial Oyster Wine Competition winner. They couldn’t enter last year because their wine wasn’t ready.

PG: So you want a young wine?
JR: Yes, no more than a year or two old. Great oyster wines are not great wines. They are great oyster wines. With oysters it’s not about the wine; it’s about the oysters. If the wine asserts itself, it doesn’t go well. If you were to have the wine by itself it would be completely different than if you have it with oysters. If it’s the right wine, the oyster changes it, but in a good way. Maybe it’s something about putting the acid and the salt together.

PG: But you don’t want an invisible wine, do you?
JR: No. They are good wines in a lean style. There should be aromatic consonance with the oyster. I ask our judges not to smell the wine first. They’re instructed first to eat the oyster, chewing it well, letting it go to every part of the palate, and then smell and sip the wine. A good oyster wine might smell of the sea.

PG: The competition is open to wines from Washington, Oregon and California. Did you ever try to do a competition with East Coast wines?
JR: Yes. The Oyster Festival in Oyster Bay, Long Island, sponsored a competition with Long Island wines one year, maybe 10 years ago. It was fun. The judges love these things but we didn’t turn up any wines that did the job. Many of the entries were chardonnays and they weren’t quite right. [Editor’s note: Readers will know that Long Island wines have evolved significantly in the last decade and enjoy wide placement at top restaurants partly because their high-acid, low-alcohol style pairs well with oysters and other East Coast seafood.]

PG: So chardonnays don’t make great oyster wines?
JR: They can, but not in the way they’re usually done in this country. American chardonnays are not crisp. Though in France, the grapes chardonnays are made from are used for Chablis and make wonderful oyster wines. A chardonnay occasionally wins our competition and it’s beautiful. But the tradition in this country are those butterscotchy, buttery, oaky wines. For an oyster wine you want something that’s fermented in stainless steel. You don’t want to get any wood involved with the fermenting process that’s going to impart a flavor to wine.

PG: Do any reds go with oysters? What about Champagne?
JR: Not in my opinion. The tannins get in the way. Same problem with rosés to a lesser extent. Some were nice but they didn’t quite do the trick. Champagne is celebratory, as are oysters. You’d want a dry Champagne, but in the end I would choose the right still wine over a Champagne.

PG: Beyond choosing the bottle, what do we need to know?
JR: Both the wine and the oysters should be cold. I like to serve the wine right out of an ice bath, or as they say in France, “Servir bien frais.” Not many wines go with oysters but when one does, it’s a beautiful thing. I call it the bliss factor. That’s what the oyster wine judges look for: the bliss factor.

Photos for this story were shot at The John Dory Oyster Bar.