Don’t Sleep on the Wines of Argentina

Dance with them instead. 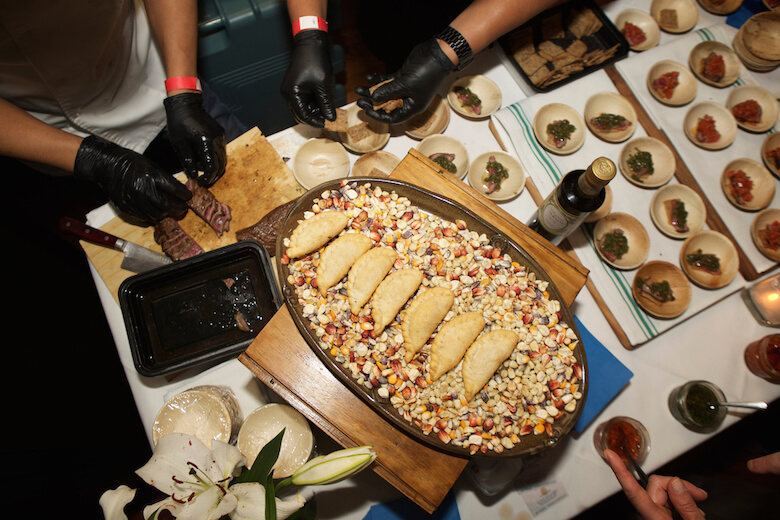 2017’s Edible Escape, which took place on Thursday, October 19, presented New Yorkers with a whirlwind tour of the world through food and wine. Occupying two floors of the historic Pier A Harbor House in lower Manhattan, guests had the opportunity to explore everywhere from Southeast Asia to the Catskills within the span of a few hours. Yet, if there was any place hoping to appeal to the minds and palates of New Yorkers, it was Argentina.

Wines of Argentina, a trade association comprised of grapegrowers, winemakers and other wine industry professionals, debuted a massive showcase at the event designed to paint a vivid picture of Argentina, one of the top ten wine exporting countries in the world. Guests were treated to a taste of the country’s most prized imports, including empañadas—delicate pastries hand-rolled and stuffed with savory vegetables, meat and cheese, courtesy of Buenos Aires–born chef Fernando Navas from Balveras on the Lower East Side—and the tango, a dance with as much style and flavor as any empañadas, courtesy of professional ballroom dancers who later led lessons for several guests feeling particularly footloose and fancy free. In the center of it all were two tasting tables that featured an array of top-scoring Argentinian Malbecs, a Malbec rosé and, perhaps surprisingly for some sippers, Sauvignon Blanc and a red blend made from Bonarda.

“This is the first time we’ve ever done anything like this,” said Magdalena Pesce, communications manager for Wines of Argentina. “What most excites me is the chance to see how consumers interact with the [wines], to have a snapshot of what the people think of Argentina [through], the wines, the tango, everything.”

From the wines to the tango lessons, as well as an interactive photo both on the far side of the pavilion, there was a lot to take in—a fact that no doubt reflects the message Argentina’s wine industry is trying to communicate to New Yorkers. Despite nearly half a century of history, Argentina is undergoing a transformation, its well-established roots in Old World–style winemaking seemingly at odds with cutting edge research and innovative techniques utilizing a host of grapes in vineyards from the Atlantic coast to the highest parts of Aconcagua.

“In terms of value and quality, Argentina has been raising the bar since the ’90s,” said Eric Malinski, vice president of International Sales & Marketing for Piatelli Vineyards, whose wines were not only included at this year’s Edible Escape, but scored high honors just a few weeks earlier at the prestigious Argentina Wine Awards (AWAs), in early September. “It’s really exciting.”

The nation’s wine industry is breaking new ground—figuratively and literally—as researchers and producers explore new grape-growing regions, and the business overall revamps its image to appeal to today’s globally attuned generation of wine drinkers, the thirstiest in decades according to a 2016 report from the Wine Market Council, a U.S.-based nonprofit industry trade association. According to the report, the total number of wine drinkers in the U.S. surged nearly 8 percent since the early aughts, a push led by Millennials, all of whom are now of legal drinking of age and quaffing up to 42 percent of wine in the U.S.

In fact, “Breaking New Ground” was the official theme of September’s 11th annual AWAs, which took place in early September, just weeks earlier, including for the first time a regional category, spotlighting the country’s breathtakingly diverse terroir, in addition to the standard grape variety and price categories. The new category reflects the shifting focus of Argentina’s wine appellation system (formally called Geographical Indications, or GIs) from political/provincial boundaries to more holistic divisions based on land and climate.

Following a revolution in quality and viniculture among Argentina’s winemakers in the late 1990s, Malbec emerged as the unquestioned international star of the country’s wine industry. However, Malbec is only part of the story, according to Analia Lucero, communications manager for Wines of Argentina’s U.S. and Canadian markets.

“If you love Malbec, you can find it in Argentina,” she said. “But not all is Malbec, and not all Malbecs are the same…Each Malbec from each region, has a particular difference from the others.”

“The thing is, diversity has been in Argentina since always, because Malbec was one of many grapes,” Pesce said. French varietals such as Cabernet Sauvignon, Cabernet Franc and Chardonnay have always been important to Argentina’s domestic wine market, she explains. “We’re looking to export more … because we have always been drinking the cabernet franc, merlot, chardonnay, sauvignon blanc—you know, the French heritage in Argentina is huge.”

“After so many years working with Malbec and, of course, sending Malbec abroad, we realized that we have to communicate the diversity,” Pesce continued. “Because at the end of the day, you cannot build the image of a country just based on one grape.”

Guests at Edible Escape were treated to racy Sauvignon Blanc from Bodegas Salentein in the Uco Valley, ripe and brambly, La Celia Elite, a Malbec blend grown in Altamira’s chalky soils and a Bonarda blend from Ruca Malen that breaks all the rules—approachable, challenging, complex and affordable, all at once. Each are already available in New York City and the tristate area. And that’s just a glimpse of the great things to come, according to Malinski. “[The wine] overdelivers on value and price point,” he said. “There is a lot on the horizon in Argentina. … It’s a little like the Wild West out there in that there are so many things to explore.”

“We are really trying to push the white wines because we have the quality, we have the volume, we have everything, we just have to put it out,” Pesce said. “Our Chardonnays are completely different because of the climate. It’s the only continental [climate] Chardonnay. Now we are planting Chardonnays in the east coast, close to the sea and also to the south. It’s very interesting. The high-altitude Chardonnays that you can find near the Andes Mountains have a very different profile. And now there are people and producers are realizing that [Argentina] has Chardonnay that can compete with the top Chardonnays in the world.”

Pesce also has high hopes for Sauvignon Blanc and Semillon in Argentina, as well as lesser known Criolla or pais grapes that are native to the country. “In the past, they were used in generic wines,” she said. “But now there is a movement, some young winemakers are producing wines made from the Criolla and in fact they are very, very good. You can find some examples in the U.K. and some here as well. They are lovely wines for the food. They are not pretentious; they are fruit-driven, very nice aromas, etc. I think we can have also a very good surprise with criolla in the future, because you can get beautiful wines with good value.”