Catch a Wandering Star: Ex-Pats From NYC Brew in the Berkshires 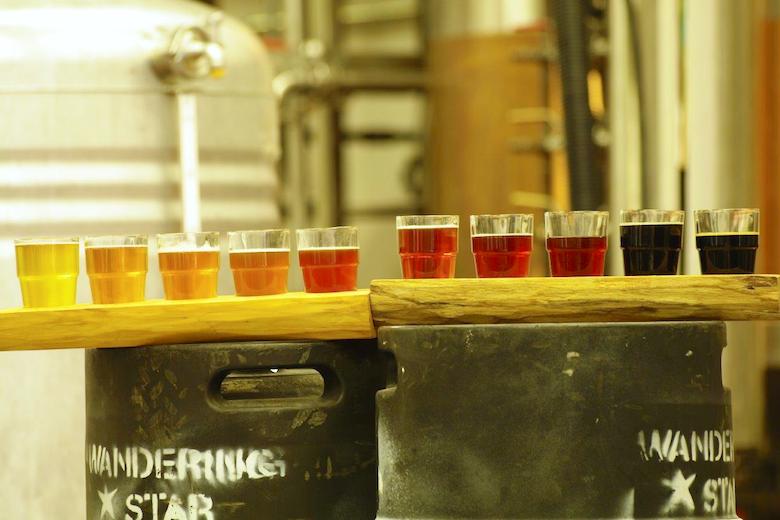 If you’ve never thought about the Berkshires beyond Tanglewood, here’s more music to your ears: The verdant, Norman Rockwell-esque Western Mass area is becoming a food mecca with which to be reckoned, with many a talented Brooklyn or Manhattan-topped toque sticking a flag in the fertile soil.

“The more I talked to people about thick bands of fat and yellow wheels of cheese, the more I heard about the region’s specific grass and bacteria, water and soil,” writes Chelsea Simpson in her story for us spun from a trek to the Green Mountain-rimmed area. Brewer and part-owner of Wandering Star Chris Post, agrees: “There’s good water up here!” says the British ex-pat brewer who found his sudsy calling in beer-sipping staples like the Blind Tiger (where he met his wife and Wandering Star president, Shannon) and Chelsea Brewing Company. “You’ve got a great self-sufficient attitude here because, basically, the Berkshires got so shafted by big industry, so a lot of people decided to put up their own shingle.”

Post, his wife, and their other two partners (also ex-pats from NYC) Chris Cuzme and Alex Hall, can sort of relate: “We decided on the name Wandering Star because it took so darn long for us to find a suitable location!” says Post. But find it they did in Pittsfield, Mass, about 6 miles from the New York State border. The name fits: Post, after all, was sent from England to New York to by the Royal Bank of Scotland to work on the trading floor for Greenwich Capital. But bored out of his gourd, the Brit started homebrewing about 10 years ago or so — and, as is often the case, dreaming of making it a career as well.

“I was looking on Ebay for homebrew equipment and someone listed the contents of entire brewpub in Michigan that had gone under for the kind of price that would make people cry these days,” he says. “I realized it was likely to be snapped up, and I thought I never want to die with that wondering feeling of ‘What if?’ So I pressed the big button and a few days later — holy crap! I just bought a brewery!”

Before he could get up and running, though, he needed to take his gallon carboy habits to multi-barrel capacity “I didn’t even have a clue how to put the thing together,” he laughs. Through an American Beer Guild certification class and some moonlighting, interning at Chelsea Brewing, and eventually working with Kelly Taylor helping to get the first batches of Kelso into the world, Post finally had the confidence he needed to strike out on his own — plus, two uber-beer geek partners that he met in the New York craft beer scene in Hall (also a an Englishman in New York) and Cuzme.

Since they opened in 2011, Wandering Star’s shine became quickly apparent among tough-critic craft brew hounds. The 15-barrel microbrewery has about 15 brews, with six steady and seasonal sudsy pours in rotation at all times. Post says their best-selling brew is the citrusy-malty 2nd Breakfast IPA (aka, “Keep Calm and Have a Session Beer”). “It’s a sessions IPA, and says a lot about how I like to brew. A lot of IPAs unfortunately are like hopped water — very bitter, hoppy, and not malty. I just don’t brew like that. It’s not part of the tradition of beer I grew up on,” he says. “In England, there’s a long tradition of squeezing the maximum amount of flavor out of a relatively light beer. I try to embody that in all of our beers.”

But their 1,000-gallon a week wares are sold only in keg and cask — e.g., if you want it, you’ve got to venture out to a stool in places like Post’s soft spot, the Blind Tiger, or other New York craft-brew serving staples, like Taproom 307, d.b.a., Eataly’s Birreria, Ulysses, and Jimmy’s No. 43  — or to the Pittsfield home base on Saturdays, when Wandering Star’s cold room and its 8 taps are open for free samples or growler-filling from 12-3pm. But to him, that’s exactly how it ought to be. “I like pubs and I like bars; it’s the social aspect of it,” muses Post. “One reason we like doing session beer: I firmly believe that’s where the majority of beer should be drunk!”