Coffee bars are serving up high-quality cups full of complexity and nuance. 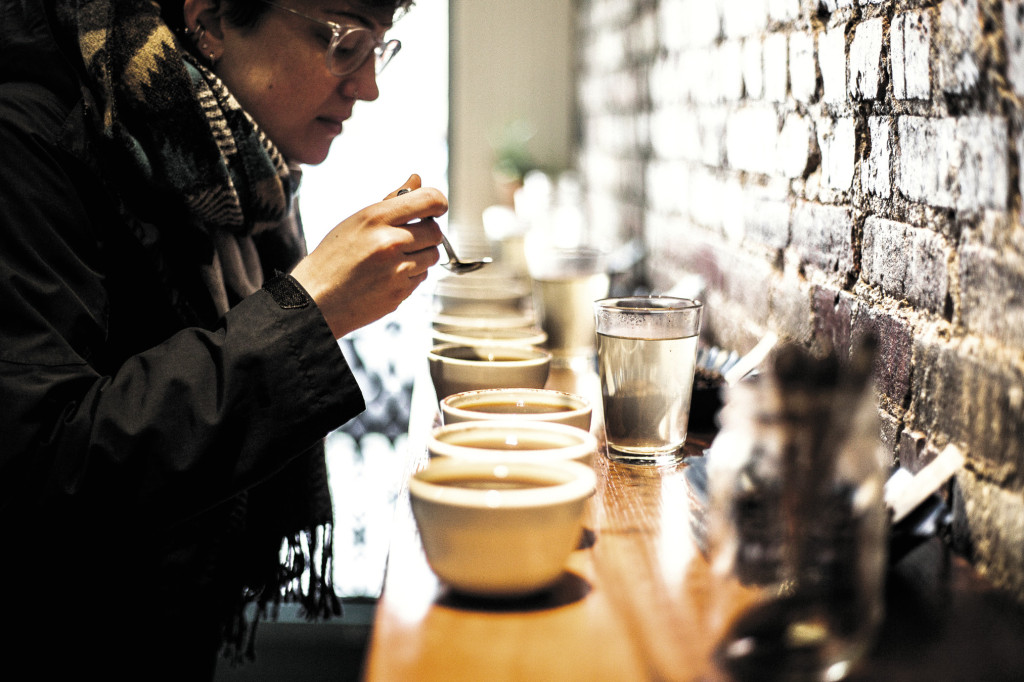 Generally speaking, what New Yorkers want, New Yorkers get. And a decade ago, when the first blushes of specialty coffee emerged on the Manhattan grid, it didn’t take long to see that the city would soon demand better coffee — extraordinary coffee, performed at a level previously unimaginable. And we got it.

Today, the city boasts scores of coffee bars serving high-quality cups full of complexity and nuance, crafted by painstakingly trained, enthusiastic baristas, all the way from 207th Street down to south of Wall Street. But just a decade ago, this world didn’t even exist. How’d we get here so fast?

Coffee has always been crucial to New York’s inner workings: whether the diner brew that still glues the city together or the beatnik coffeehouse scene, we’re a community of communities pulled together by places where we can refuel, places where we can talk and build social movements or simply places that let us sit down. 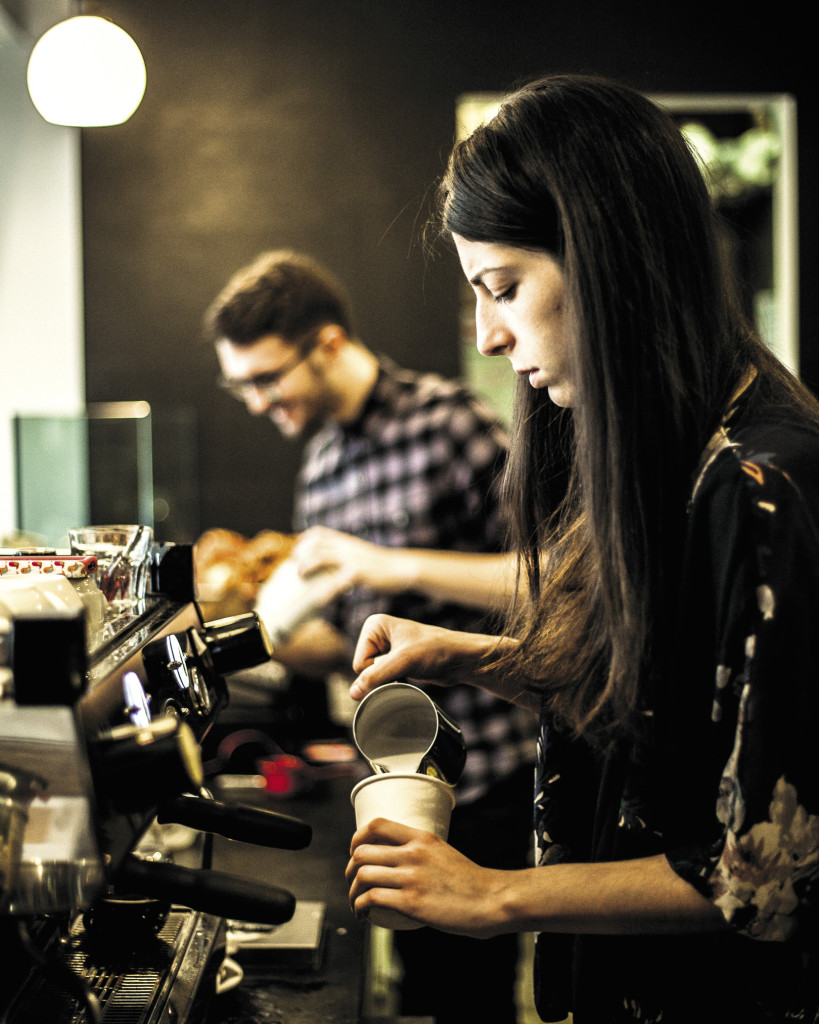 Beyond the bean: At cafés like Third Rail, serious sourcing and hand-built machines have become common.

But the new notion of coffee as culinary sidestepped this broader social connection for a while. When coffee shops of high geek caliber, like Ninth Street Espresso, Joe and Café Grumpy, began to emerge in the 2000s, they were oases in a diner coffee desert, and though they catered to their neighborhoods and itinerant macchiato tourists, their obsession with detail was an exception rather than a rule. A new focus on the origins of the coffees they were brewing — down to the name-of-the-farmer level — as well as a fresh obsession with technique and how to bring the best out of each unique coffee — turned the notion of café spaces on their ear, from places far beyond first dates, laptops and caffeine to microculinary labs of coffee worship.

Though Starbucks had planted the ideas for millions that it was acceptable to splurge $3, $4 or even $5 on a cup of coffee, the critical step toward today’s standard — industry-certified baristas who can describe the farm the coffee came from, whose microfoamed milk was unimpeachable, whose training had an actual pedigree — was yet to come.

For those early entrepreneurs, it was the coffee itself that offered the real promise.

When husband and wife Chris Timbrell and Caroline Bell braved to bring Café Grumpy from Greenpoint across the East River in 2006, they were firm in their belief that the coffees they were then brewing — supremely balanced and sweet Ecco Reserve espresso from Santa Rosa, California, and other fine, nuanced coffees from Vancouver’s 49th Parallel roasters—would be enough to convince the market. 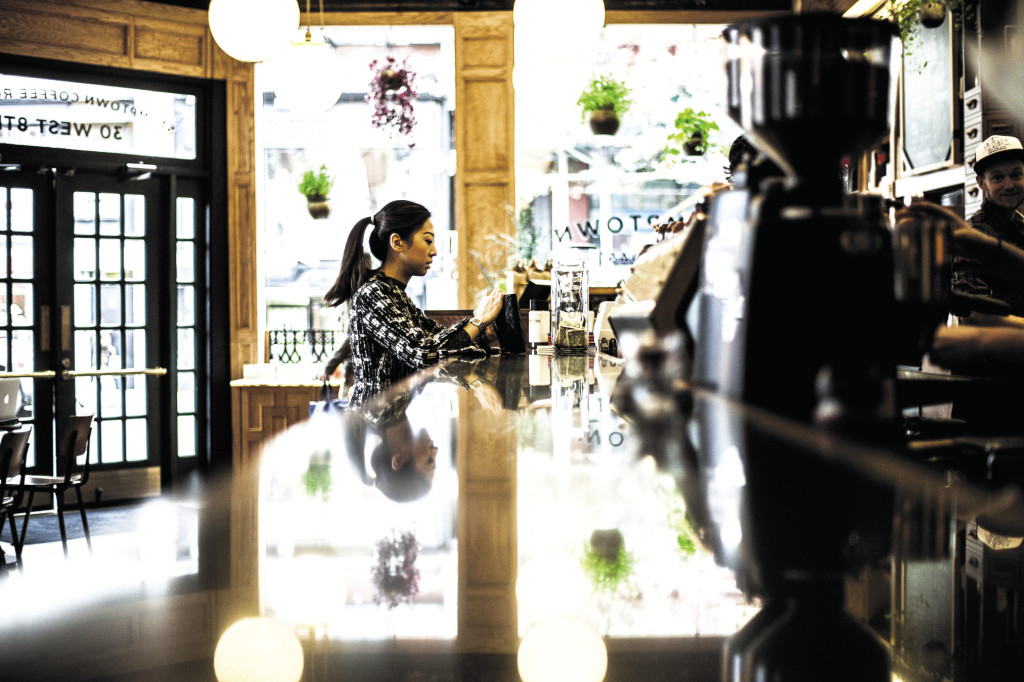 Raising the bar: A new focus on technique and origins—down to the name-of-the-farmer level—have transformed cafés from places for first dates, laptops and caffeine into microculinary labs of coffee worship.

“We just thought people would start to appreciate good-quality coffee once they tasted it,” says Bell. “We didn’t have plans far beyond Greenpoint, but once we opened in Chelsea in 2006, we found a much more enthusiastic customer base.”

Café Grumpy has since opened two more Manhattan cafés, one just steps from Times Square and another at their in-house bakery on the Lower East Side.

Ken Nye’s Ninth Street Espresso has grown from the original willow-treed spot on Avenue C where it opened in 2001 all the way to the Chelsea Market, the Lombardy Hotel in Midtown and even to nearby 10th Street, a few blocks and a whole other customer base away, from its original location.

Joe (formerly Joe the Art of Coffee) is now a regional mini-empire, having expanded well past the supercrowded tables of their first store on Waverly and Gay in 2003 (remember when Amy Sedaris baked the cupcakes there?) into an 11-store chain that extends from Columbia University all the way south to Philly. And what’s more? Every one of them now roasts their own coffee, deepening their relationship with the beans and the ethics behind the industry, all while making a product even more their own. 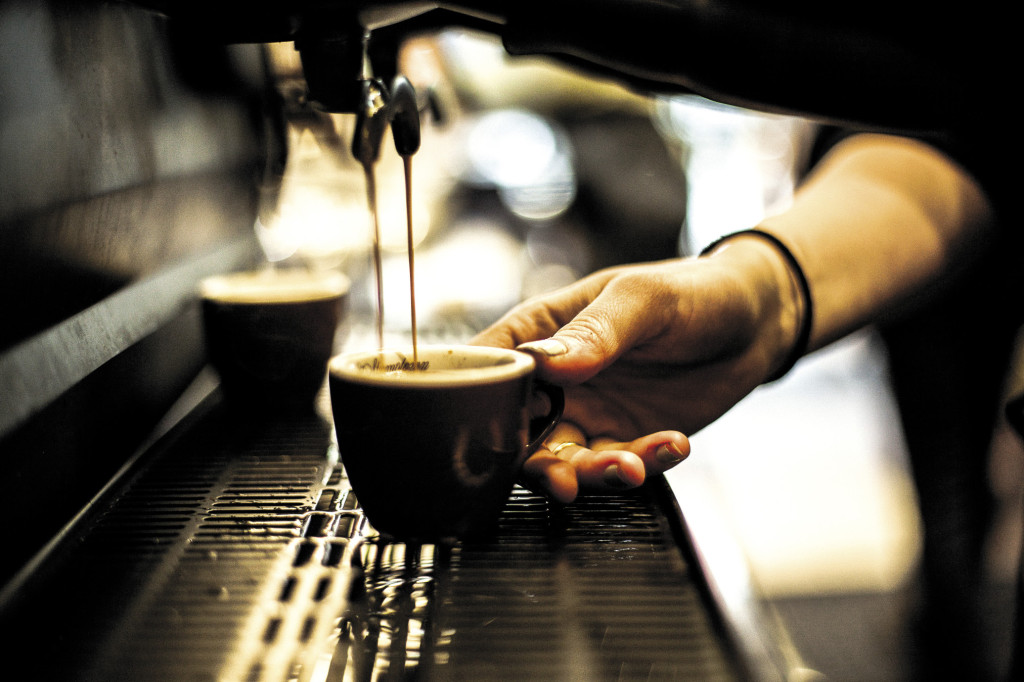 The explosion of DIY roasting, both at shops’ own roasteries or with the time-share use of Red Hook–based roasting incubator Pulley Collective, which leases time in a fully fitted-out roasting space, has fomented a deeper understanding among cafés of the coffees they serve. Knowing them intimately from the roasting level allows more delicate control over the flavor profiles they want, and ties everyone from roaster to barista to café owner closer to the better finished product. Focus has tightened on both product and process: not only do New Yorkers want to buy coffee from a café that’s taken the time to work closely with farmers and importers to ensure a higher quality, more fairly traded product — they’re willing to wait seven minutes to enjoy that single-origin coffee from pourover brewing equipment imported — when it’s even available — from Japan. The more we democratize what’s in the cup, the higher the bar for brewing it gets.

As the audience for more sophisticated coffees has grown, café openings have gained steam, now seeming to take place almost weekly, whether by entrepreneurial transplants from already bustling scenes on the West Coast or in Australia, or funded by once-small, now-national, investor-backed artisan roasters like Stumptown and Blue Bottle. Specialty coffee is in fact no longer special — it’s something we’re all in on, a baseline of quality New Yorkers assume at this point. Which Ninth Street Espresso founder Nye sees as a good thing.

“I think some level of specialty coffee has become almost a standard. It’s expected now. It’s part of the lexicon now,” says Nye, whose East Village shop was slinging high-concentration espresso drinks long before anyone else came to town. 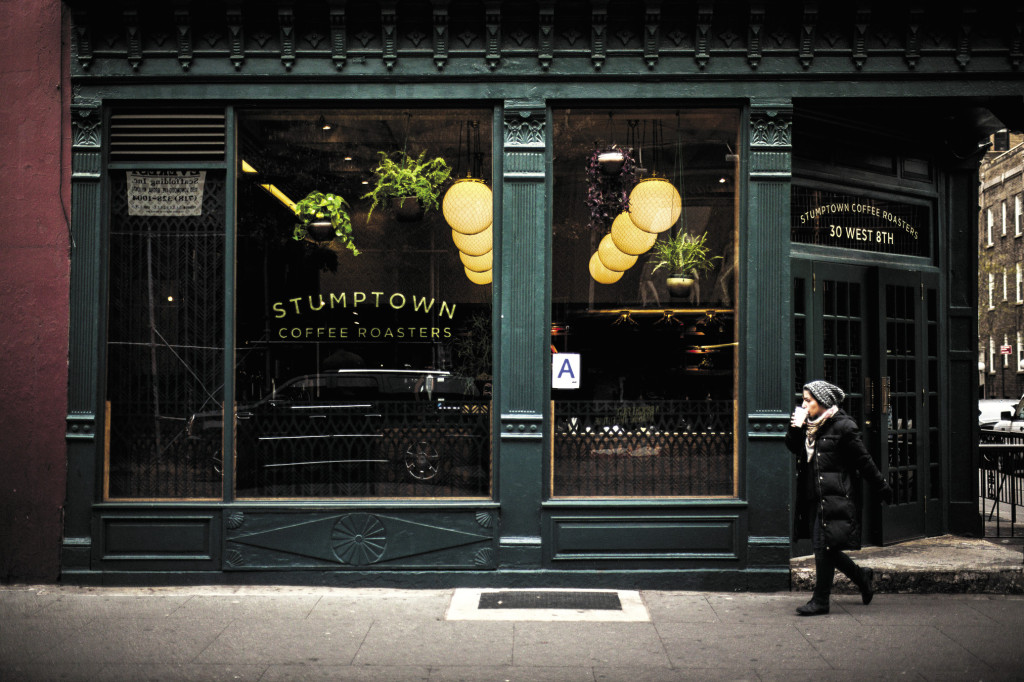 What were once mere signifiers seen through the café window — recognized tools of the serious coffee trade like Japanese pourover cones, handcrafted Italian- or Aussie-built espresso machines, and so forth — are now only the minimum requirement to even begin to convince your customers you’re going to make great coffee. We’ve reached a new point in the evolutionary timeline, where just having the right beans and equipment isn’t promise enough. What sets the truly special places apart in this delightfully crowded landscape can be harder to pinpoint, and it’s not a black and white line between native New York cafés and “the guys from out of town.” Larger roasters from elsewhere who’ve set up shop in Manhattan have done so with an eye to the independent charm that sparked the whole scene to begin with, and have created stunning, irresistible cafés (some of which Nye playfully refers to as “high-end Indie”). What matters most in the emerging landscape of investor-driven indie-inspired shops and mom-and-pops alike is simply the amount of care: from the top level down to the last hand that touches your cup, the notion of how to deliver a truly handcrafted, special coffee continues to be a source of inspiration from larger to smaller companies, and works back and forth. It raises the coffee game for everyone.

One example of a café new on the scene, but striving to set itself apart in this time of raised stakes, is Box Kite, a project of veteran baristas Cora Lambert and Erik Becker that began as a TriBeCa pop-up and gravitated toward a permanent home in the East Village in December. Lambert’s pedigree includes the briefly brilliant RBC Café (it’s interesting to note that in the city’s specialty coffee movement, only a few shops like RBC and the lasted-nine-months-in-the-late-2000s Café Collage, can really be counted as casualties), which was known for its boggling selection of brewing devices and coffees brought in from all over.

Box Kite, says the transplanted Chicagoan who came to New York for art but stayed for coffee, is more approachable, offering coffees only from two roasters — MadCap in Grand Rapids, and Ritual in San Francisco. It also offers an X-factor even the most contemporary of Manhattan’s cafés have done little but flirt with: booze. 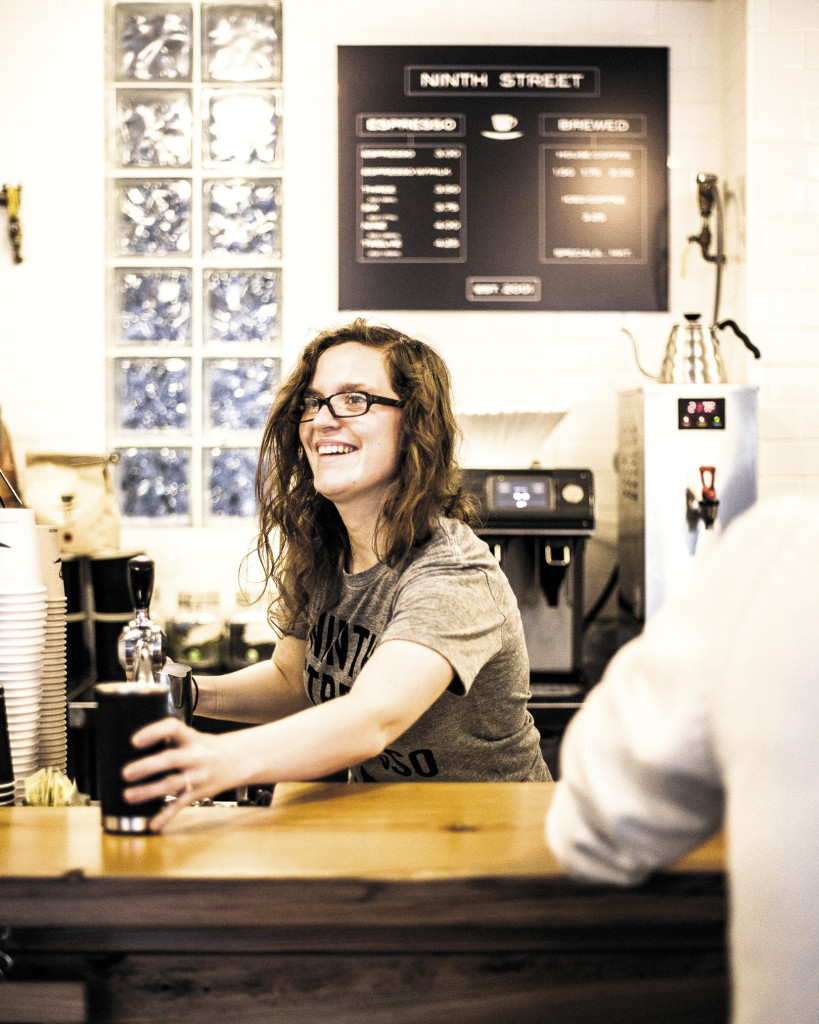 Revolution brewing: At places like Ninth Street Espresso, above left, and Stumptown Brew Bar, above, fourth-wave mentality brings more transparency and coffee theater, plus a fresh jolt of interaction between barista and brew seeker.

“We’re focusing on how to put coffee and alcohol together,” says Lambert, who herself slums it as a mixologist (and who cut her fancy-coffee teeth at Sasha Petraske’s brief foray into coffee at the Mercury Dime). “We’ve created flight boards, one is a shot [of espresso] and a beer,” said Lambert. Another is a wine and tea pairing, which will change with the seasons.

Naturally, Lambert and partner Erik Becker selected their St. Mark’s Place space not just for the foot traffic but for the sensibility of a neighborhood that’s always appreciated its drink. But beyond booze, Box Kite aims to fit the vibe of the neighborhood — naturally, the best cafés complement the psychogeographic tone of their environments. Now that culinary coffee is expected, what people really need is a place to drink that brings back the community context that cafés started with to begin with.

Like Humberto Ricardo’s Third Rail, which opened a second shop on a wee angle of Stuyvesant Street in the East Village, and whose intimate Sullivan Street space is known as a uniquely friendly, carefully conceived escape within busy city life. Certainly everyone inside his diminutive cafés is happier because of the quality of coffee — single origins and staple espressos from nearby Stumptown and other specially featured guest roasters from around the world. The feel of these deliciously appointed spaces is no accident. They’re special because they don’t just serve coffee to Manhattanites — they get Manhattanites.

Ricardo, who’s lived in Manhattan for more than 20 years, sees understanding the local pulse as essential to making a café succeed beyond its coffee, in having an inside grasp of what will synthesize space and superior quality and make something special. It puts us at a very exciting precipice in Manhattan’s coffee trajectory — a rich landscape of choices among the highest-caliber preparations and thoughtfully sourced and roasted beans this city’s ever seen.

“There are invisible rhythms and patterns everywhere in the city,” says Ricardo, looking out on a crowded Greenwich Avenue over diner coffee.

And thanks to café owners like Ricardo, and the citizens who fill their cups at shops like his, those rhythms beat just a little faster. 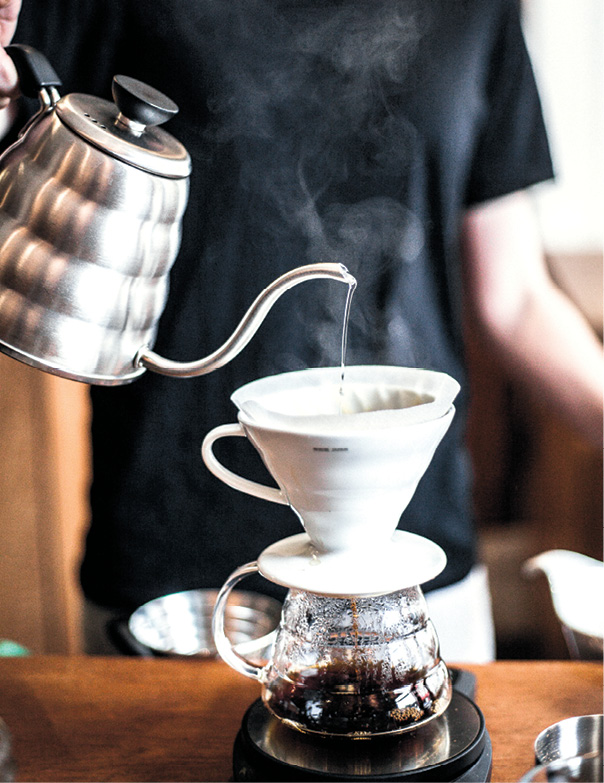