Just before he left last month, we asked him to tell us the things he’ll miss the most about NYC. 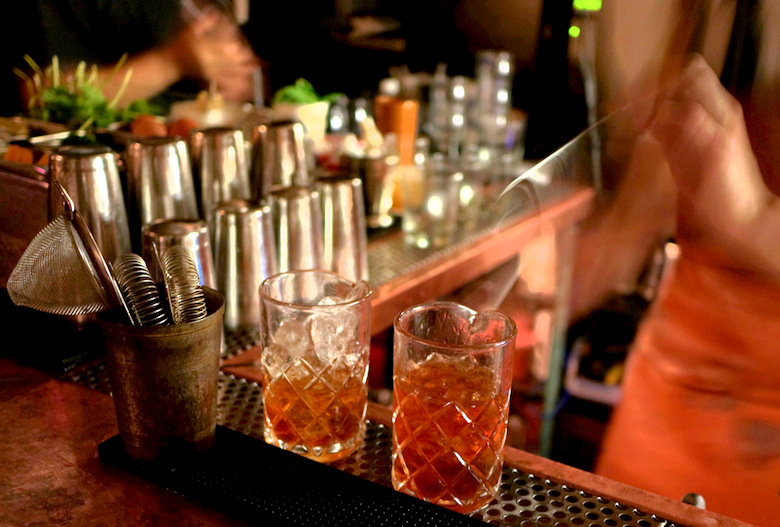 Years ago, not long after it opened, I had to do a story on the momentum of the speakeasy for Imbibe magazine. The brunt of my research entailed spending several nights sitting at the bar of PDT (one of our city’s earlier adapters of behind-secret-door locations — theirs, in a hotdog shop accessed via a telephone booth — now that’s style), being a bar-fly on the wall, and chatting for many hours with one of the best barmen in the biz, Jim Meehan. Each night I was afforded the opportunity to watch him work: zipping through exacting measurements, concocting on a moment’s notice the perfect tipple for customers who were unsure of what they wanted; and, always, being the smart, affable, lovely guy that makes him so great at his job and makes me and legions of others enormous fans of his work.

Ever looking for the perfect, just-right ingredient, it is not unusual to get a phone message or an email from him saying, “Hey Z, do you know that guy who makes that sparkling apple mead?” (this in reference to a story I did here on Enlightenment Wines) because his curiosity and keen culinary ability to find just the right thing, be it from 5 miles away or 5,000, is kind of uncanny.

All this is to introduce the following sad bit of news: Mr. Meehan has moved. Portland, OR, now claims him as their own (here’s lookin’ at you, Edible Portland!), and while we wish him and his family all the best of everything there is, New York’s bar community will be sad for his absence, as much for his talent as his being a good human being in a city that can sometimes find itself needing such people.

Just before he left last month, I asked him to tell me the things he’ll miss the most about NYC — good luck, Jim. Come back and visit us all soon, ya hear?

1. (Actual) face time with friends, colleagues, acquaintances and familiar faces.
2. Its restaurants (in general) and my favorite in the former hood: Momofuku Noodle Bar and Motorino (delivered to my door) among others.
3. The way people respond to you (abroad) when you say you live in New York City
4. Daily conversations with my staff, our patrons, purveyors and all the random interactions associated with bar stewardship.
5. Ninth Street Espresso: I went there every day, twice a day.
6. Knowing where most everything is.
7. Being close to my brother and his little family, in addition to my loving in-laws.
8. Operating during the business hours of the center of the Western World.
9. The New York Times being my local paper.
10. Comprehensive public transportation.