Make it a true party and add a pitcher of red Sangria. 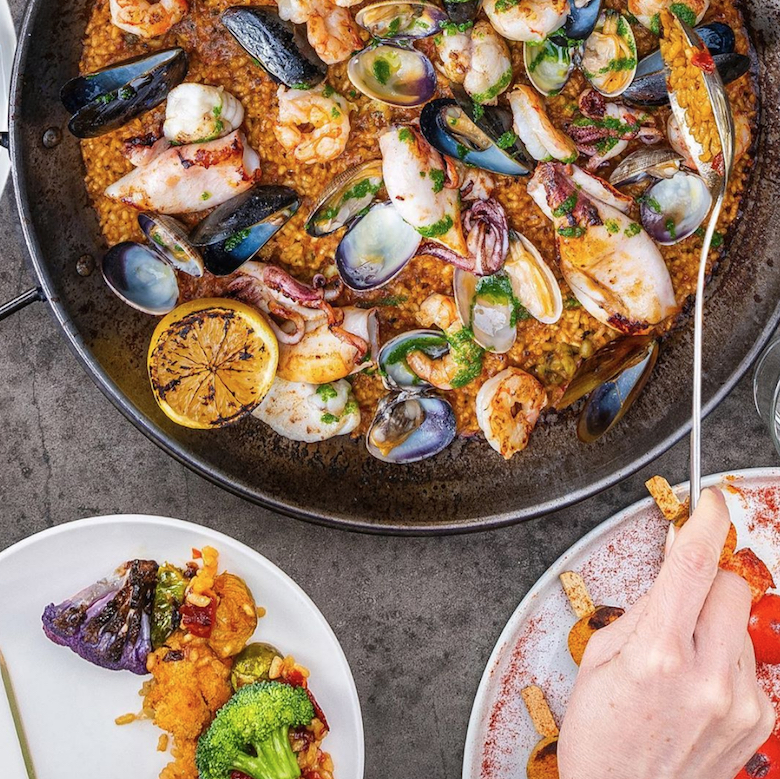 Food for a crowd? Not time for that yet. But if you’re slowly widening your bubble, according to CDC guidelines, then you can safely share a meal or two with a few friends (preferably outdoors, thank you very much). In my own moments of quarantine, I realized that life in food had become limited in its redundancy. That’s not to say that I’m not a good enough cook. It’s only to say that my pantry could only take me so far. It could not necessarily take me, say, back to glorious Spain, where the crust on the bottom of a paella, formed from the caramelization of rice and high heat on a flattened pan is known as socarrat.

Bottom line: I’ve made paella once, and it was ok. Mostly, it’s a labor-intensive dish that I’d prefer to leave in the hands of professionals (and, in quarantine, when you run out of saffron, poof: that’s it!). But for those within striking distance of one of New York’s most beloved Spanish restaurants, you’ll be happy to know that paella can now come to you. Boqueria, which has locations throughout the city, is offering a seafood paella for two, delivered to your home.

The dish includes monkfish, sepia, squid, shrimp, clams, mussels, saffron, and salsa verde, and also comes with manchego and Spanish olives to start. Make it a true party and add a pitcher of red Sangria. The paella, by the way, costs $48, which, to my mind, is a small price to pay for that crispy, crunchy rice at the bottom of the pan, delivered straight to your door.

Do not skip dessert, in the case of Boqueria. Churros con chocolate, the traditional Spanish fried treat, come dusted in cinnamon sugar and served with a pudding-like chocolate. But the stars are the churros rellenos de dulce de leche, fried dough pieces that are filled with sticky, caramel-like dulce de leche—milk that has cooked down until the solids have turned sweet and brown. It’s the perfect end to a meal of caramelized parts.