This little piggy went to the Hungarian Meat Market. 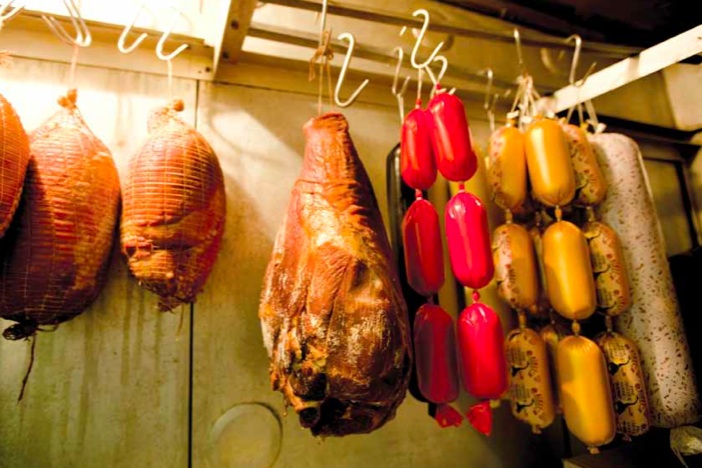 There’s an old Hungarian saying that when a peasant eats a chicken, either the peasant or the chicken is sick. That’s because Hungarians love pork. They consume roughly 141 pounds of it per year, per person. (Americans: a measly 51 pounds.) It is likely this swinish passion that has been the secret to survival for one of the Upper East Side’s long-standing specialty food shops, the Hungarian Meat Market.

Located at 81st and Second—an area known as Goulash Avenue during Yorkville’s mid-century Mittel-European heyday—this old-world butcher is an oasis for charcuterie-loving sentimentalists who long to feed fond memories. Many of the district’s once-venerable Hungarian haunts—the Mocca Café, Paprikas Weiss, Blue Danube Books—have over the years followed the lead of the Gabor sisters, exiting stage left. But the 60-year-old Hungarian Meat Market is doing a cautious costume change as it prepares for its third act. Staffed with a new generation of Magyars, it lays claim to being the only Hungarian butcher of its kind in Manhattan, replete with a licensed on-premises smokehouse and a savory line of homemade pork products, whose names may get lost in translation but whose toothsomeness does not.

Lazlo Gubicza and his brother Ferenc, émigrés who trained and worked extensively in Hungary’s highly developed food industry, bought the business in 2001. Their challenge then and now: to retain their dwindling base of customers from the old country while attracting eaters who favor Mediterranean or Asian cuisines. Veal saltimbocca? Yes. Peking duck? Why not? Stuffed cabbage with smoked ham hocks? Let me get back to you.

As traditional butchers, the brothers prepare, smoke and cure their own products from start to finish. Laszlo describes Hungarian cuisine as “cultured peasant food.” He concedes that many younger New Yorkers just don’t get it, but says once they take a first bite of a juicy, lightly smoked Debreceni sausage, they’re keen to continue their edible exploration. (And just in case they’re not, Laszlo expanded the market’s borders by annexing a variety of non-Hungarian items which include the likes of chicken sausage, turkey and liver pâté and a selection of fetas.)

A sampling of the Gubiczas’ handiwork is spread across the top of the refrigerated display cases, encouraging daily nosh adventures for curious customers. One day the improvised buffet may be slices of fasírt—a dense beef-pork hamburger as rich as pâté; the next, chunks of boy scout sausage or lengths of tepertos—crispy, meaty cracklings. Neatly arranged within the cases are all manner of meats that once fortified the nomadic Magyars of the Hungarian plains and which now rival the breadth and depth of an upscale charcutier’s inventory.

Among the offerings are six types of bacon (szalonna), including hot-smoked, cold-smoked, double-smoked, paprikacoated and deep-fried. One variety is simply called bread bacon. Its sop: a chunk of rye to catch its greasy evils.

Confused? Ask one of the stoically smiling countermen for help. They’ll offer a mini-tutorial in halting English but with crisp efficiency. A fleet of salamis, wursts, cooked hams and bolognas open up new possibilities for lunch or a light dinner, while an array of pork, from hock to spare ribs to loin, may call for a serious consultation with a cookbook. Fully smoked hams are tucked away in the smokehouse.

A few clarifying words about sausage: In Hungary, the term of art is Kolbacz—not to be confused with supermarket kielbasa, a generic fresh pork sausage heavily seasoned with garlic. Rather, Hungarian Kolbacz is defined by fresh (fris) and smoked (fustolt) varieties. Here the latter includes Gyulai, csabai, paraszt, Debreceni and Cserkész, flavored with garlic, paprika or both. Some of the smoked variety can be eaten on the spot such as the Cserkesz, which has the integrity of a beef jerky. Others—including the Gyulai and Debreceni—are best as supporting players in traditional cooked dishes such as potato-egg casserole (rakott krumpli) or pepper and tomato stew (lesco).

The fresh sausage is limited to two styles of hurka: rice liver sausage (majas) and rice blood sausage (véres). (Hurkas are typically made with rice, cornmeal or grains.) Looking to avoid unfamiliar mouthfeel? Ask to taste the sausage before you purchase; cooked samples are usually available.

Despite the plethora of pork, a visit to the Hungarian Meat Market isn’t just about being high on the hog. You’ll find a cornucopia of Hungarian and East European food products, ranging from an encyclopedic assortment of soup noodles to plastic sacks of fiery fresh red paprika to chestnut puree, fruit compotes and jars of pickled salad and banana peppers. Strudel and peppery bacon biscuits (pogácsa) are available daily as are prepared meals, direct from the classic Hungarian repertoire—veal goulash, sauerkraut and pork, sour cherry soup, potatoes paprikas, lescos and more. In the chock-full refrigerated cases you’ll find such delights as ground poppy seeds, walnuts and almonds; rendered duck fat; Hungarian-style sour cream and sweet butter from the Czech Republic’s Jana Valley.

The shop is located at a bustling intersection with customers coming and going expeditiously, but a visitor needn’t make haste.  Instead, take a seat by the corner window and enjoy a freshly made sandwich or plate of stuffed cabbage. Afterward, you’ll feel as contented as a pig.