For Puerto Ricans, Cuchifritos offers a mouthful of memories. 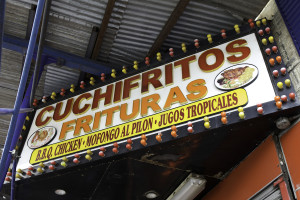 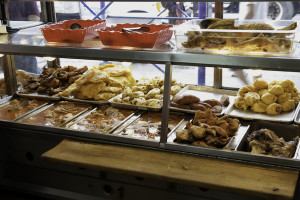 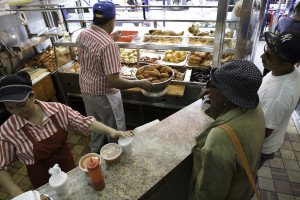 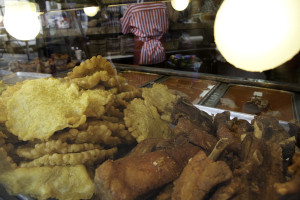 For Latinos living in New York, there’s cuchifritos and then there’s Cuchifritos.

Literally the word means “fried pork” (cuchi being short for cochino, or “pig” en español). More generally, the term refers to both Puerto Rican-style soul food and the neighborhood take-outs that sell it. But for over 50 years, Cuchifritos on 116th Street has epitomized the category, symbolized Spanish Harlem and represented home to New York’s Puerto Ricans.

And now, after many people who were physically and culturally nourished at its crowded counter have grown up and moved away, it’s a reason to come back to the barrio, if just for a mouthful of memories.

When you first step into Cuchifritos, it’s hard to tell where the sidewalk ends and the business begins. Sounds of city traffic, street conversation and snatches of reggaeton pour in through the wide-open windows and serve as a soundtrack as orders are placed in rapid-fire Spanish, deep fryers crackle and giant juicers along the back wall whir, pumping out tropical flavors like passion fruit, tamarind and mabi.

Known as Italian Harlem in the 1940s, an influx of immigrants from Puerto Rico gave the neighborhood a new name and accent, and by the time Heriberto Bello arrived from Cuba in the 1950s, East Harlem had become the center of Puerto Rican life in New York City. He opened Cuchifritos in 1961 with a traditional cuchifrito lineup, and the eatery has been offering a taste of the Caribbean ever since.

Manager Rafael Sánchez, 53, has been manning the counter since 1981 and is known to regulars as Bienvenido (or Bienve for short). He greets customers in his sing-song Dominican accent, taking new orders while simultaneously dropping a check and ringing up the next customer. Seemingly everywhere at once, waitresses in candy-striped shirts keep up with the frenzied energy in the always-crowded restaurant so no one feels the wait. Bello, 85, who still owns Cuchifritos, now runs it with the help of his two adult children, Evelyn and Eddie, and his nephew, German Testa. “It’s his pride,” says Evelyn, “his joy, his life.”

Nuyorican playwright Carmen Rivera, 47, remembers when authentic Puerto Rican food was available throughout East Harlem. But as Dominicans and more recently Mexicans have opened businesses here, not to mention the familiar pattern of gentrification felt in the larger community, the sands are shifting.

“There’s more diversity, but at the same time the cuchifritos, as a lasting symbol of Puerto Rican culture, have become more important.”

For Puerto Rican families who have decamped to the suburbs, Cuchifritos evokes the neighborhood they left behind—but unlike the axiom, you can always go home again to Cuchifritos. Fridays and Saturdays are the busiest, with lines curving around the counter and snaking out the door. Expat parents make it their last stop after seeing family, treating their children to their own old favorites like piononos (stuffed ripe plantains) and bacalaitos (cod fish fritters) before making the long trip home to Connecticut or Pennsylvania.

As the neighborhood has changed, Cuchifritos has remained the same. At the old-fashioned lunch counter that runs the length of the restaurant, customers still sit elbow-to-elbow. On a recent afternoon, Justo Soriano orders mofongo al pilón, plantains blended with crispy chicharrón and mashed to order in a traditional mortar and pestle, to share with his seven-year-old son. Reminiscing with Ana Luisa Falcón, 77, while she enjoys her favorite fritters, they catch each other up on the neighborhood openings and closings. Everyone who comes in seems ready to join the ongoing conversation while they wait for their order, picking up where they left off no matter how long they’ve been gone.