A Tale of Two Pigweeds 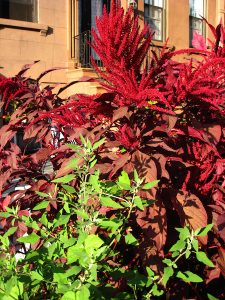 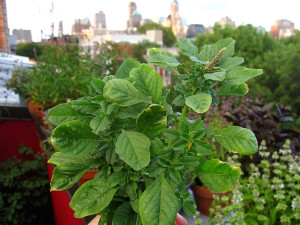 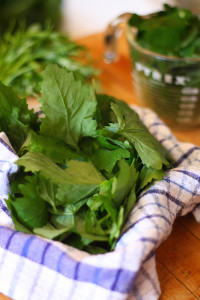 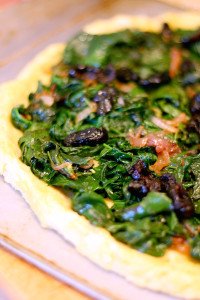 The uninvited lone redroot pigweed plant that appeared two summers ago on my terrace was so effective at spreading its dust of seeds that they are now in every pot. That is what makes a weed: irrepressibility. What clinches the definition is that it is an unwanted plant.

But I do want it. I find the leaves and young stems of Amaranthus retroflexus more appealing than spinach or chard. It is also a rare warm-weather green, filling a leafy gap in the seasonal eater’s year.

Many a spurned plant has been called pigweed, and perhaps some lucky pigs have benefited from them, in health and in pleasure. Redroot pigweed, splayed in our edible spotlight, is an annual herb whose celebrity cousins are the statuesque red-tressed supermodels collectively called red amaranth. Domesticated centuries ago, red amaranth’s seed was a labor-intensive staple of the Aztec diet, and these pedigreed vegetables are still cultivated for food and for visual drama. Jamaica’s sonorous callaloo relies upon yet another species of amaranth (there are more than 60, not counting hybrids) for its soulful and leafy base.

Poor redroot pigweed languishes insignificantly in the retinue of these honored members of amaranth society. It is not a pretty plant. For one thing, it sprawls, heading sideways before it thinks to look up. It has no showy flower or seed heads. It is plain green. It hangs out on sidewalks. And it insinuates itself where it was not invited. Once established it head-butts the plants we like to nurture. It has grown resistant to herbicides. Where it appears in rows of cultivated crops it is met with a deluge of increasingly ineffective and virulent poisons. It is often considered toxic to livestock because it absorbs so much of the nitrogen in commercially applied chemical fertilizers—converting it to nitrates—that it becomes a reflection of our agricultural malpractices and turns on us, giving as good as it gets.

On Manhattan island, agribusiness has not taken hold, however, and the pigweed reaching tropical proportions by summer’s sticky climax is usually safe to eat. In community gardens it is yanked out; on terraces and rooftops, gardeners toss it onto a wilting heap; and in tree pits, parks and open lots it flourishes, plain green and anonymous.

Foragers, choose your pigweed patch with care, and common sense. Avoid the tree pits, beleaguered receptacles for the noisome urban effluvia. But visit a community garden and perform some free and welcome weeding. Collect it from a clean park. At summer’s end, harvest seeds from a mature plant, sow them in a sunny spot and look forward to your own welcome weeds next year.

In Cape Town, Tipsy Titoti, my parents’ housekeeper and a second mother to me, taught me to make a traditional rural stew based on edible green weeds, known as morogo in the Sesotho language. I cook pigweed in water until tender, with scallion greens and a little potato or mealie meal (cornmeal or grits, Stateside). With nothing more than salt as seasoning, this becomes a deeply comforting and nutritious broth. Crostini topped with sautéed pigweed and garlic is a bracing tonic: the plant is high in protein, iron, calcium and essential amino acids.

There is another pigweed, and it grows everywhere: Chenopodium album—also known as lamb’s-quarters and white goosefoot. Like redroot pigweed (and spinach and beets and quinoa), it belongs to the family Amaranthaceae, and is lovely to eat. Happily for those shy of supping from the sidewalk, it has begun to appear at farmers markets. Its powdery gray-blue leaves are delicious when raw in spring salads but equally rewarding as a pot herb later in the year. Pick the tops from the summer-tall plants and prepare them as you would any more familiar green. Wilted and sautéed, they are an excellent side to steak, still sizzling from the grill. For a simple supper I cook the chopped leaves in a lemony broth to which I add a poached egg at the last minute. I make a pigweed tart, topping flaky olive oil pastry with the cooked greens, oil-cured olives and cream whisked with egg yolks. The cooked, cooled leaves are a hearty lunch, tucked into pita bread with a dollop of garlicky yogurt and a whisper of sumac.

Our claustrophobic city summers offer a few compensations. These pigweeds number among them. For anyone who wants to eat well, they are an old, new ingredient whose potential has barely been explored in our cosmopolitan kitchens. And for a forager, they satisfy the thrill of the hunt and provide a reason to head out into the muggy cloud.

For more urban forager columns and recipes, go to EdibleManhattan.com.